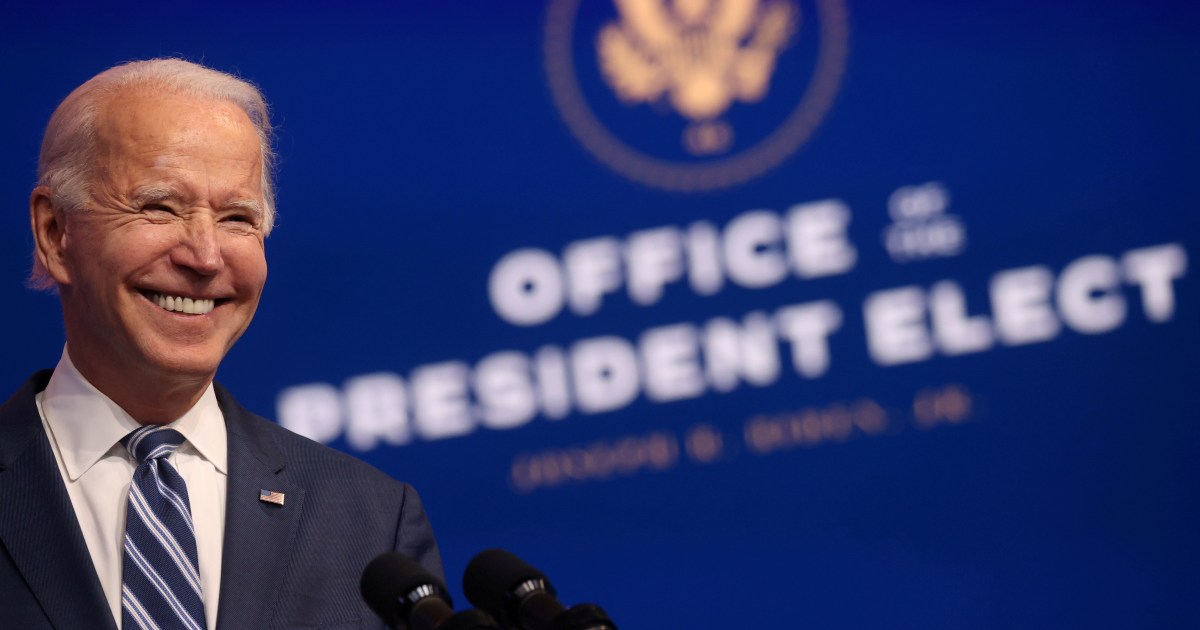 President-elect Joe Biden has inherited a United States image tarnished by four years of racist rhetoric and hurtful policies towards Latin America’s most vulnerable citizens, and repairing that image will be one of his first challenges [File: Jonathan Ernst/Reuters]

Mexico City, Mexico – As many voters across major United States cities poured into the streets on Saturday to celebrate a win for President-elect Joe Biden, the streets of the Mexican capital retained their usual hum of city noise.

But rest assured, experts say, while the people here may not be actively celebrating, the news represents a welcome change of rhetoric regarding the country and a White House that sees Mexicans not as “rapists and criminals,” but as “friends and neighbours.”

For many Latin American leaders, Biden’s electoral victory represents a return to a more civilised age, and relief seems to be the sentiment most widely shared.

Argentina’s President Alberto Fernandez was among the first to offer congratulations to Biden, going one step further and tweeting his praise for the American people in exercising their right to vote in record numbers.

Even Venezuela’s Nicolas Maduro offered a renewed willingness to dialogue with the incoming administration.

Sources close to Lopez Obrador have said the Mexican president’s silence is an attempt to avoid provoking US President Donald Trump before his tenure in the White House is over.

“With regard to the US election, we are going to wait until all the legal matters have been resolved,” Lopez Obrador said at a news conference. “I can’t congratulate one candidate or the other. I want to wait until the electoral process is over.”

It’s a tactic that’s come to characterise the sort of tight-rope diplomacy political leaders in Mexico have been forced to adopt when dealing with the US, Mexico’s largest and most important trading partner.

It was a lesson that Lopez Obrador learned in 2019 when Trump threatened to slam Mexico with 25 percent export tariffs if Mexico failed to enforce an immigration policy tailored to US interests.

There is this idea that immigration policy will change under a President Biden, and that it will somehow favour Mexico. I don’t see that being the case. But I do think we will see more collaboration from the US in order to tackle the root causes behind why people are trying to leave their countries.

With a Biden presidency, the tone on bilateral cooperation with Mexico on the subject of immigration is expected to be much softer, though there are still questions over how this softer tone will translate into policy.

“Historically, Democrats have been more friendly in their discourse,” said Wilma Gandoy, a Mexican diplomat and professor of international relations at the Technological University of Monterrey. “But even [former President Barack] Obama was one of the presidents who deported the most people.”

“There is this idea that immigration policy will change under a President Biden, and that it will somehow favour Mexico. I don’t see that being the case,” she added. “But I do think we will see more collaboration from the US in order to tackle the root causes behind why people are trying to leave their countries.”

Just like in 2016, many people in Latin America paid very close attention to the 2020 US election, though the coronavirus pandemic remains the most pressing issue in the region and throughout the world.

Many hope a return to multilateralism could not only bring about a more swift end to the outbreak, but also correct significant setbacks in human rights issues that have been made worse by the spread of COVID-19.

The Trump administration has forced tens of thousands of people seeking safety at the border to wait in dangerous and precarious conditions.

In Colombia, one of the most important strategic partners for the US, Biden could demand that authorities pay more attention to human rights abuses. In the last year, more than 100 human rights activists have been killed, but it has garnered very little pushback from officials within the Trump administration.

Trump’s bellicose stance toward the socioeconomic and political crisis in Venezuela could also give way to a negotiated political solution under the new Democratic administration.

Work to be done

For Mexico and the nations of northern Central America such as Guatemala, Honduras and El Salvador, Trump’s defeat represents a reversal of policies that many human rights observers say have stretched the limits of international law.

“The Trump administration has forced tens of thousands of people seeking safety at the border to wait in dangerous and precarious conditions,” said Erika Guevara-Rosas, Americas Director for Amnesty International.

Under the controversial “Remain in Mexico” policy, the Trump administration strong-armed the governments of Guatemala, El Salvador and Honduras into signing a series of agreements that have forced tens of thousands of asylum seekers to remain in their own countries while their cases are heard by US authorities.

The Trump administration’s ‘Remain in Mexico’ policy has been criticised by human rights groups [File: Paul Ratje/Reuters]“Seeking asylum is a human right,” said Guevara-Rosas, adding that under Trump, thousands of people have been kept in immigration detention or separated from their families.

Those conditions have served “to perpetrate human rights violations that, it is true, are not new to the United States, but have been exacerbated by the Trump administration over the years,” she explained. “So we are setting up very clear recommendations around the asylum system that we believe the Biden administration will really need to prioritise.”

If Twitter is any barometer, the sense is that Latin American leaders are optimistic about their future relationships with the US.

Many others in the region are celebrating the record voter turnout in the US elections as a victory in itself, one that sets an important example for a region of the world where presidential elections aren’t always fair or free.

But this doesn’t mean the incoming Biden administration won’t face challenges in mending relationships with allies and partners in Latin America.

Biden has inherited a US image tarnished by four years of racist rhetoric and hurtful policies toward Latin America’s most vulnerable citizens, and repairing that image will be one of his first challenges when he sets foot back inside the White House.