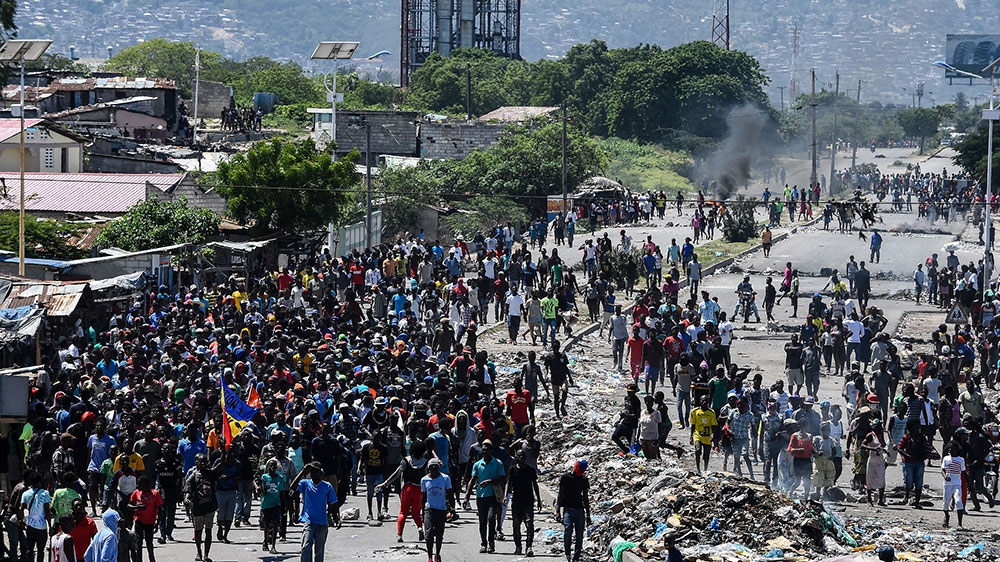 People march in Cite Soleil area of Port-au-Prince, Haiti during a protest to demand the resignation of President Jovenel Moise [Chandan Khanna/AFP]

For months now, Haiti has been shaken by intensifying protests. A deepening economic crisis and growing fuel and food shortages have sent people to the streets, demanding the resignation of US-backed President Jovenel Moise, who has so far resisted stepping down.

The crisis started last year and was compounded by natural disasters that have repeatedly devastated the island nation: Hurricanes destroyed housing, food production, livelihoods and infrastructure and a severe drought dried up the island’s water resources.

While international media has focused on a familiar story of corruption and mismanagement, what lies beneath this debilitating crisis is much more serious – a deadly combination of neocolonialism, neoliberalism and climate injustice. Indeed, what is happening now in Haiti is extreme and should scare us all, as it foreshadows what could happen to the rest of the planet if we do not take immediate action.

Petrocaribe and the fuel crisis

In January 2006, Haiti joined the Venezuelan solidarity programme Petrocaribe, which supplied it with oil under favourable terms. The country was able to buy 60,000 barrels a day at a discounted price, with half the costs repayable over 25 years at a one-percent interest rate in cash, or in exchange for goods Haiti exported.

This was supposed to free up resources for economic development initiatives in infrastructure and boost agricultural production. However, large-scale corruption swallowed billions of dollars of profit the programme earned the government, while at the same time amassing a growing debt to Venezuela.

With the Venezuelan economy in tatters, Caracas had to stop oil shipments in March 2018, which triggered fuel shortages in Haiti. The crisis was compounded by the government’s move in July that year to remove energy subsidies, which increased fuel prices by more than 50 percent.

The decision was taken under pressure from the International Monetary Fund – which promised a $96m financial loan package to help the country repay its debt – and the G20 and international agencies, which have been calling for an end to fuel subsidies. The move also reflected Haiti’s policy commitments under the Paris Agreement to reduce greenhouse gas emissions by 31 percent by 2030.

The cut off of oil supplies through the Petrocaribe programme also forced the Haitian government to turn to the global market – in particular, US-based energy supplier Novum Energy Corp – to supply fuel. As the government has fallen further into debt – now owing some $130m to fuel suppliers – shortages worsened.

By succumbing to international pressure to cut subsidies, the Haitian government accommodated foreign agendas but endangered the survival of its own population. The country produces just 0.02 percent of global greenhouse gas emissions and yet its people are paying a disproportionate price for abiding by international financial standards and emission controls.

Fuel subsidies amounted to just 2.2 percent of Haiti’s GDP and were one way in which the government was able to support impoverished citizens, still struggling after the massive 2010 earthquake and the consequences of yearly natural disasters.

After the recent hurricanes, many communities were left off the grid and fuel has been badly needed to run electricity generators. The economy of the country has also been devastated, with most people employed in the informal sector and highly dependent on having access to cheaper fuel.

Indeed, these energy subsidies were providing much-needed support to over 6 million impoverished Haitians who live on $2.41 a day.

Since mid-2018, the crisis has progressively gotten worse and, recently, protests against the government have intensified.

It is clear to anyone who visits Haiti today that austerity measures and “free market” forces cannot resolve the problems of a country facing the worst effects of climate change, government dysfunction, donor corruption, and a never-ending debt crisis.

At the same time, despite making efforts to divest from fossil fuels and despite being ranked among the top three countries most vulnerable to climate change, Haiti has struggled with climate action; its efforts lack focus and are mostly driven by international donors.

For example, according to research I did last year, the country is struggling to access finance allocated through global initiatives like the Green Climate Fund (GCF). Bureaucratic barriers and onerous criteria are making it almost impossible for the government to tap into these resources.

This has prevented the country from building its climate resilience and, now, with every natural disaster that strikes, it has to rely on short-term handouts by international aid agencies to manage its consequences.

Neocolonialism in a time of climate change

The Haitian crisis is very much the product of the toxic combination of colonialism, neoliberalism and an unjust approach to tackling climate change.

The environmental degradation, which is exacerbated with each drought and hurricane season, goes back to French colonial rule over Haiti when land and forests were abused, rendering large swathes of the country barren and infertile.

After Haiti managed to liberate itself from French colonial rule in the early 19th century, it fell within the growing US sphere of influence and has been unable to set itself free ever since. The US not only occupied the country for nearly two decades and repeatedly interfered in its affairs, but today it is also supporting a highly unpopular president whose resignation protesters continue to demand.

While preventing the Haitian people from holding their politicians accountable and fighting corruption, Washington has also been imposing neoliberal policies on the country, which have fed into its economic crisis.

The US approach to the Haitian economy has been predominantly extractive. The country has an estimated $20bn of mineral deposits exploited mostly by US and Canadian corporations.

It is time for climate justice

It is time the world starts paying attention to what is going on in Haiti because its crisis illustrates what would happen to the rest of the world if neoliberal and neocolonial policies continue to dominate the global economy.

Haitians have now woken up to the idea that US-styled free-market economics will only worsen its mounting crisis in the face of climate change and underdevelopment.

They have been fighting back on their own, fully aware that their domestic elites will not address their concerns and are only able to remain in power because of US intervention.

Up to this point, the international climate action movement has completely ignored what has been going on in Haiti. While calls for a global green new deal are commendable, they cannot disregard the continuous climate injustice befalling places like Haiti.

If it is indeed going to be a “new” deal, then it cannot follow the paternalistic “we know what is best for you” approach. It needs to account for realities on the ground in the Global South, so it does not cause more harm than good.

A transition to a new energy system can only be successful if it acknowledges the power the Global North still has over the South and the need for climate justice.

Climate action can only bring about a new, sustainable status quo if it recognises the agency and experience of developing countries and indigenous, working-class and peasant movements, and builds upon this knowledge.

In Haiti, support has to be extended to black working-class Haitians, who constitute the majority of the population, and their basic needs met. Popular protests and their demands have to be backed and an accountability process facilitated.

The country also needs significant no-strings-attached investment carried out under anti-corruption scrutiny to help pull its economy away from extractivism and resource-export dependence and put it on a course towards green development. Only then can the process of building climate resilience start under the leadership of Haitians themselves.

Indeed, Haiti will be the first big test for the transnational climate justice movement. If it fails to deliver climate justice to the Haitians, then its global green new deal is doomed to failure.

Editor’s note: The article has been updated to correct an error in the estimate of mineral deposits Haiti currently holds.