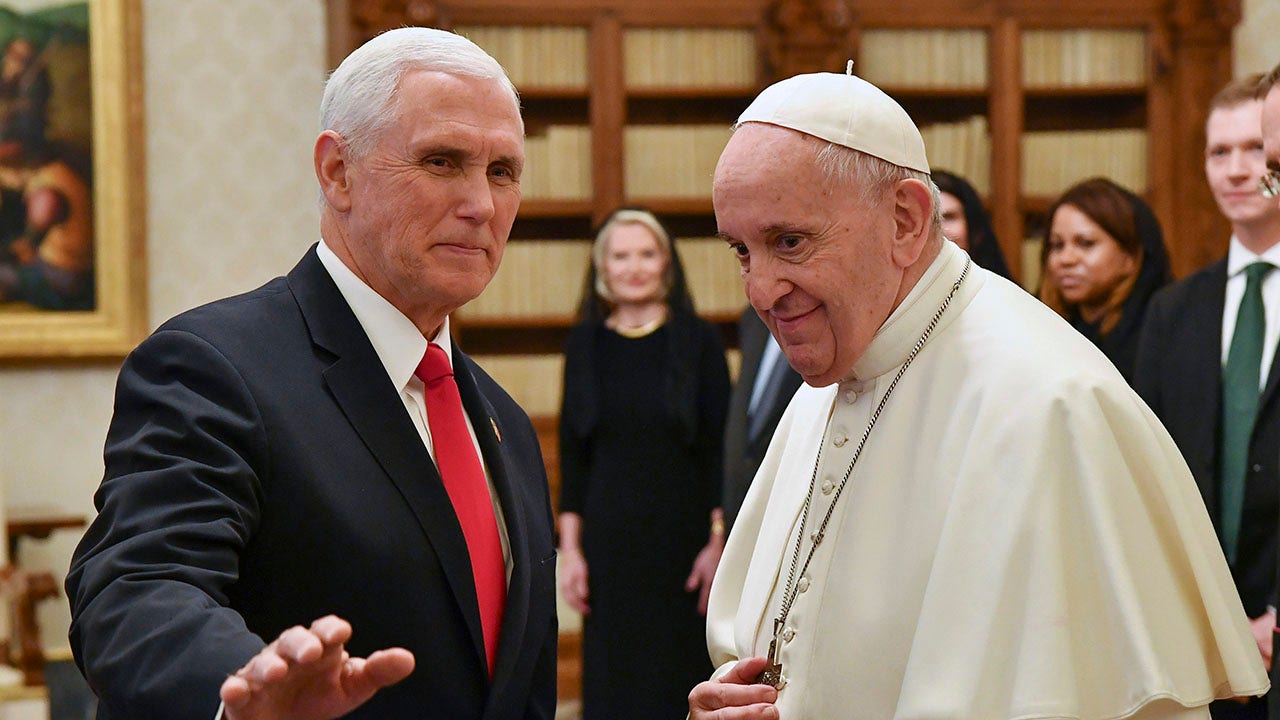 VATICAN CITY — U.S. Vice President Mike Pence met with Pope Francis at the Vatican on Friday, discussing the anti-abortion march in Washington and telling the pontiff, “You made me a hero” back home by granting him a private audience.

The pope and the vice president had a private hour-long conversation. Pence was beaming after the meeting, which appeared to be particularly cordial.

Before journalists were ushered out of the library, Pence told Francis: “I want to extend the warmest greeting on behalf of President Donald Trump, who so enjoyed his visit here.”

Trump had a private audience with Francis at the Vatican in 2017, and on Friday in Washington, the U.S. president was attending an anti-abortion rally in Washington. Trump is the first sitting U.S. president to do so in the history of the annual March for Life’s history.

Pence’s office said the march in the U.S. capital was among the topics discussed with the pontiff. Catholic church teaching forbids abortion, and Pence himself has been staunchly anti-abortion.

U.S. Vice President Mike Pence, second from left, and part of his delegation are given a private tour of the Vatican after his private audience with Pope Francis, at the Vatican, Friday, Jan. 24, 2020. (Associated Press)

In an interview right after his Vatican visit, Pence told U.S. Catholic media outlet EWTN News that it was a “great privilege” to meet with Francis.

He said meeting with Francis on a day when “literally hundreds of thousands of Americans, including many Catholic Americans, are gathered on our National Mall in Washington D.C. standing up for the right to life was a particular joy for me.”

Pence also gushed pride for Trump, hailing him as the “most pro-life president in American history.”

Trump has embraced the anti-abortion agenda in a nod to evangelical Christians, a politically influential bloc in U.S. politics. But in 1999, Trump had gone on record in an interview describing himself as “pro-choice in every respect.”

In Friday’s interview, Pence also praised Francis for his “passion for the sanctity of life.”

The vice president’s office also said Pence and the pope talked about the crisis in Venezuela and displaced religious minorities in the Middle East.

The Vatican didn’t say what was discussed.

Francis has repeatedly cited the social and economic hardships in Venezuela, in his native continent of South America. He also has decried that Christian minorities in parts of the Middle East have been forced to flee fighting or persecution, including in Iraq and Syria.

Pence, with his wife and daughter-in-law, were greeted at Rome’s Ciampino airport by the U.S ambassador to the Holy See, Callista Gingrich, and her husband, former U.S. House Speaker Newt Gingrich.

Francis smiled warmly throughout the traditional exchange of gifts at the end of the audience. Pence presented the pope with a large, plain wooden cross made from a tree on the grounds of his official residence in Washington.

Francis gave Pence five bound books of his writings as pope. The pontiff then pointed to a large white envelope, explaining, “this is a message of peace.” Francis was referring to an annual message to promote peace issued by the Vatican.

After the audience with Francis, Pence headed to separate meetings with Italian President Sergio Mattarella and Premier Giuseppe Conte.

Pence told Mattarella that his father-in-law is an Italian-American, and noted that America in decades past “welcomed millions of Italians to our shores.”