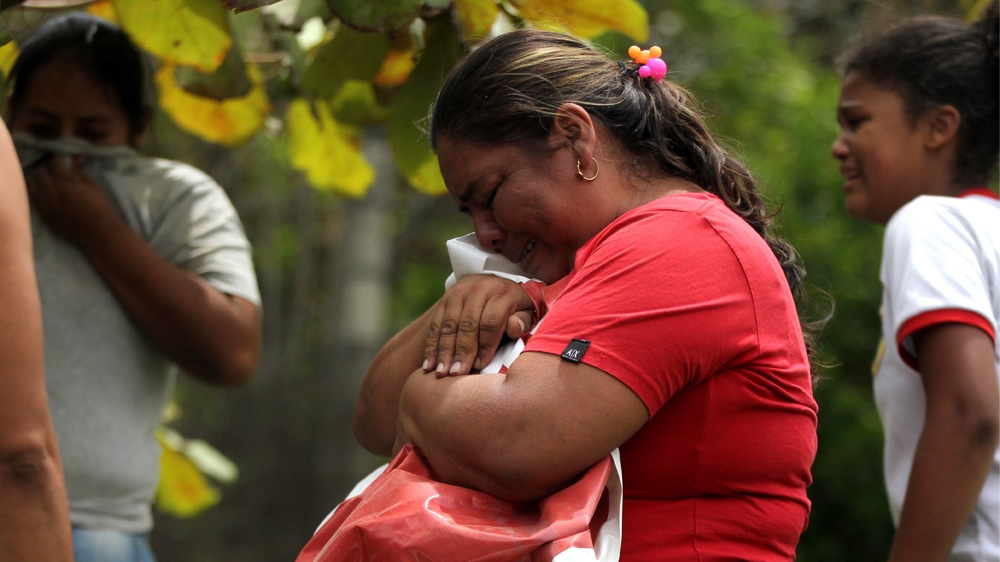 Friends and family of liberal politician Karina Garcia who was killed along with five others, crying in Suarez, Cauca, Colombia [Ernesto Guzman Jr/EPA-EFE]

Pereira, Colombia – Luz Polo was at a campaign event when she said a man sent by criminal groups broke down the doors of her home in the small western Colombian city of Pereira. After receiving death threats two weeks prior for campaigning on a platform to help Venezuelan migrants in her city, the man used a boulder to beat his way through her apartment, where her 16-year-old daughter sat alone.

The teen was saved after neighbours who saw the man breaking in called the police, the 43-year-old politician running for the city council said, but she “was so scared”.

“And she told me she didn’t like politics because she felt that any man could break down the door and walk into her home,” Polo told Al Jazeera.

Polo started her political career in Venezuela, where she grew up. She was forced to flee back to Colombia, her birth country, in 2015 after she said she was politically persecuted by the Venezuelan government.

But after receiving rounds of death threats and the attack on her home, she said even crisis-stricken Venezuela was better than Colombia, especially for politicians.

Seven candidates have been murdered and dozens more have been attacked or threatened in the lead up to the October 27 local and regional elections, making it the most violent electoral year since the country signed the 2016 peace accord with the Revolutionary Armed Forces of Colombia (FARC).

Observers say across Colombia female candidates like Polo face even greater challenges than their male counterparts, and are systematically threatened with physical and sexual violence in an effort to deter them from running.

“We’re threatened more often, and the people who threaten us are men,” Polo said. “They view us as more vulnerable, because there aren’t many of us and we don’t have a support system around us.”

“The tradition is for women to stay in domestic spaces,” she told Al Jazeera. “When women push back against these traditional patriarchal values that are so entrenched in Colombian society, this kind of violence emerges in an attempt to return them to the place societal norms have traditionally put them.”

Despite a 2011 quota system that mandates women must make up 30 percent of every electoral list, only 12 percent of mayors in Colombia are women.

In the eastern city of Cauca last month, the leading liberal candidate Karina Garcia and five on her team were killed in their car by heavy gunfire and a grenade blast. Like Polo, Garcia had received threats. She had also asked the government for protection, but received none. The Colombian government claimed that the killing was committed by FARC dissidents, but political watchdogs, citing the power dynamics in the region, say that the hit was likely ordered by a political rival. FARC dissidents have denied responsibility for the killing.

Garcia’s campaign platform had been: “One woman, one hope.”

Damaged vehicle of mayoral candidate Karina Garcia, who was killed along with five other people during an attack near Suarez, Cauca department, Colombia [File: Ernesto Guzman Jr/EPA-EFE]

Estefania Rivera Guzman, an analyst and researcher at the observatory, attributed much of the violence to “machismo” – a brand of exaggerated and toxic masculinity in Latin America that involves dominance and maintaining outdated gender roles – prominent in Colombian culture.

It was a femicide, but it was also a political femicide.

Garcia’s killing, Rivera said, was the result of a mix of regional power structures and the candidate’s questioning of those norms.

“It was a femicide, but it was also a political femicide,” Rivera said. “It is because she is a woman and, above all else, a woman who was interested in occupying the political space, that is historically occupied by men.”

Attacks against female candidates and social leaders are also disproportionate in their levels of violence, often taking on a more gruesome form, said Mosquera of Sisma Mujer.

Mosquera pointed to the horrific nature of Garcia’s killing, as well as the use of sexual violence and threats against other female politicians and leaders.

Candlelight vigil for mayoral candidate Karina Garcia who was killed along with five others, in Suarez, Cauca department, Colombia [Ernesto Guzman Jr/EPA-EFE]

Additionally, some of the attacks even come directly from other male candidates.

A local congressman in Cauca used vulgar language to describe Rosalbina Valdes, another female candidate in the city. Valdes had also previously received death threats from others.

Gender-based violence has a long legacy in the South American country.

During Colombia’s more than half-century-long armed conflict, the targeting of women and sexual violence were widespread war tactics by paramilitaries, rebel fighters and security forces in order to instil fear in the communities. For some, it was used as a political message, targeting women because they were believed to be connected to their rivals.

The bloody conflict left an estimated 29,000 people sexually abused since the beginning of the war in 1964, according to data from Colombia’s Victims Unit.

The fear tactics, Mosquera said, appear to be having a ripple effect on local communities, deterring women from being politically active and effectively silencing them.

“In the territory of Karina, in northern Cauca, we’ve heard women saying, ‘if this happens to a candidate who had a political trajectory … the best thing for us to do as women is to lower our participation’,” Mosquera said.

But for Polo, it was precisely that lack of participation and fear among women that made her continuing her campaign so important.