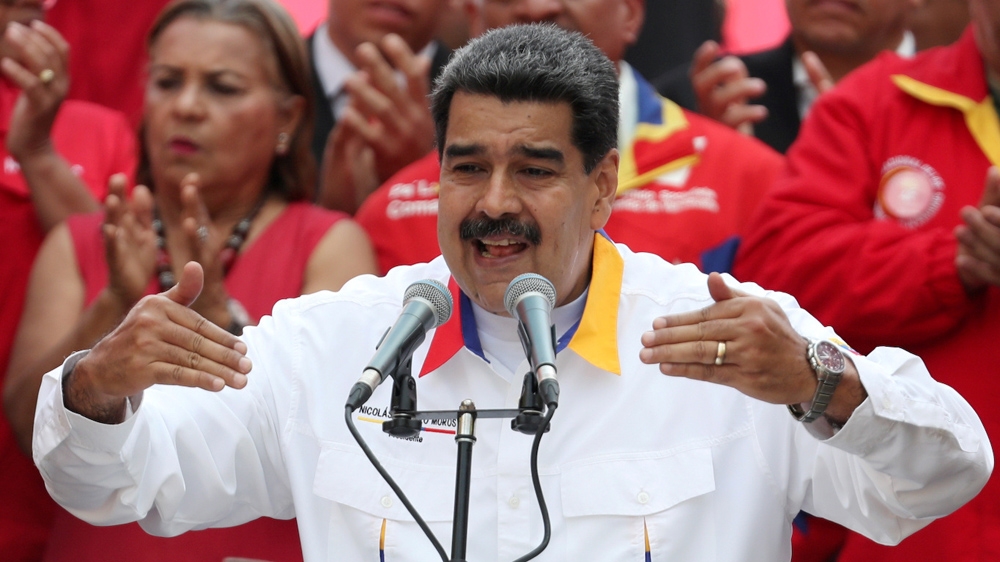 Venezuela’s President Nicolas Maduro talks during a rally in support of the government in Caracas, Venezuela [File: Ivan Alvarado/File Photo/Reuters]

Venezuela won a contested election for a seat on the UN Human Rights Council on Thursday despite a campaign by over 50 organisations and many countries opposed to Nicolas Maduro‘s government and its rights record.

There was scattered applause in the General Assembly chamber when its president announced the results of the voting for two Latin American seats. Brazil topped the ballot with 153 votes, followed by Venezuela with 105 votes and late entry Costa Rica with 96 votes.

Venezuelan Foreign Minister Jorge Arreaza called the vote “a victory” that followed “a fierce and brutal campaign by the United States … and its subordinate nations”.

The administration of US President Donald Trump has recognised opposition leader Juan Guaido as Venezuela’s interim president and US Ambassador Kelly Craft called the placing of Maduro’s government on the council “an embarrassment to the United Nations and a tragedy for the people of Venezuela”.

“That one of the world’s worst human-rights abusers would be granted a seat on a body that is supposed to defend human rights is utterly appalling,” Craft said in a statement after the vote.

Philippe Bolopion, Human Rights Watch’s deputy director for global advocacy, called Venezuela’s election undeserved and “a slap in the face to the country’s countless victims who’ve been tortured and murdered by government forces, as well as the millions who have fled largely because of a humanitarian emergency the government unleashed”.

Venezuela’s election “shows that there is still a lot to do to create awareness in the international community about the catastrophic state of human rights in that country”, the ministry said in a statement.

The 193-member world body elected 14 members to the 47-member Human Rights Council for three-year terms starting January 1. Under its rules, seats are allocated to regions to ensure geographical representation.

In other contested races, Iraq lost out in the Asian group contest for four seats to Japan, South Korea, Indonesia and the Marshall Islands, and Moldova lost in the Eastern Europe group race for two seats to Armenia and Poland.

There was no competition for the two Western group seats and Germany and the Netherlands were overwhelmingly elected.

Created in 2006 to replace a commission discredited because of some members’ sorry rights records, the new council soon came to face similar criticism.

The United States left the council partly because it saw the group as a forum for hypocrisy about human rights, though also because Washington says the council is anti-Israel.

Craft, the US ambassador, said Thursday’s vote “provides ironclad proof that the Human Rights Council is broken and reinforces why the United States withdrew”.

When the UN’s high commissioner for human rights, Michelle Bachelet, chronicled cases of torture, sexual abuse and extrajudicial killings in the country, Deputy Foreign Minister William Castillo said her report “does not reflect the reality in our country”.

He called it a “biased vision” of Venezuela and demanded it be “corrected”.

Guaido, the head of Venezuela’s opposition-controlled congress who invoked the country’s constituion earlier this year to declare himself interim president, said the UN has been “tarnished” by the vote and “loses credibility” by validating Maduro.

For his part, Maduro has accused Guaido and the US of attempting a coup.

Maduro’s attorney general, Tarek William Saab, meanwhile, announced the release of 24 people he called “political prisoners” in a gesture stemming from a new round of negotiations with minority parties that do not include Guaido.

However, Saab did not immediately release the prisoners’ names.

Human Rights Watch’s Bolopion said the UN Rights Council should continue to scrutinize the Maduro government’s “abuses”, even with Venezuela at the table, and hold those responsible to account.

“The UN General Assembly should recognise that electing serial rights abusers like Venezuela betrays the fundamental principles it set out when it created the Human Rights Council,” he said.

It criticised Poland for systematically eroding “the independence and effective functioning of its judiciary”, Indonesia for rising “religious intolerance” and Mauritania for using laws on criminal defamation, spreading “false information and blasphemy to prosecute human rights activists, bloggers and political dissidents”. And it urged Sudan’s new transitional government to “set an example on human rights promotion by taking concrete steps towards accountability and reforms.”