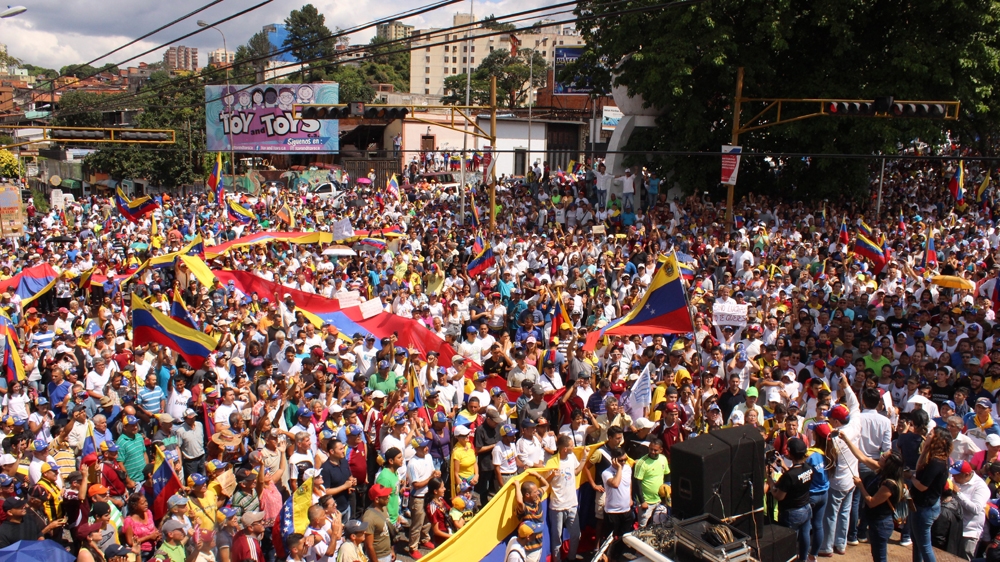 Thousands of people in Venezuela have taken part in competing rallies held by the country’s rival political factions, the first since July.

In the opposition gathering in the capital, Juan Guaido, who declared himself interim president in January, called on demonstrators to keep up the pressure on President Nicolas Maduro by staging daily protests.

“They thought they were going to put the Venezuelan people to sleep, they thought they had instilled fear into our hearts,” Guaido told supporters gathered in front of Bolivia’s embassy in Caracas.

“Bolivia took 18 days, we have been at it for years. I ask all of Venezuela to keep protesting,” he said, urging supporters to take inspiration from demonstrations in Bolivia that forced former President Evo Morales to flee into exile last week.

According to local media reports, the opposition protests in Caracas and elsewhere in the country were big but significantly smaller that those held earlier in the year.

“The political protests called by the opposition against Maduro will have limited effects,” analyst Carlos Pina told Al Jazeera.

“The military support to President Maduro remains intact … the opposition will need to rethink its strategy,” he said.

“Guaido has also been very limited in suggesting or proposing a strategy that could change the current [status quo],” Pina added.

Meanwhile, Maduro’s supporters also took to the streets in different parts of the country in rallies billed as events to reject “destabilisation attempts against Venezuela’s government.”

“We want peace, democracy. We must overthrow this racist fascism,” Maduro said in his address delivered via telephone to the people gathered in the pro-government rally in Caracas.

Some of the attendees held up placards in support of Morales, while Maduro denounced the lack of condemnation by United Nations human rights chief Michelle Bachelet “on the massacre that is happening in Bolivia”.

Translation: National March against [the] Fascism promoted by the US government in Bolivia and in Venezuela.

Venezuela has been mired in a deep political crisis since January, when Guaido declared himself interim president alleging that Maduro re-election in May 2018 was illegitimate.

Guaido has since been backed by dozens of Western countries and their regional allies.

Maduro has accused the opposition of stirring up violence and of attempting a coup with the help of the United States.

The country is also facing economic problems including hyperinflation and a lack of basic services such as electricity, water and transportation has severely affected much of the population.