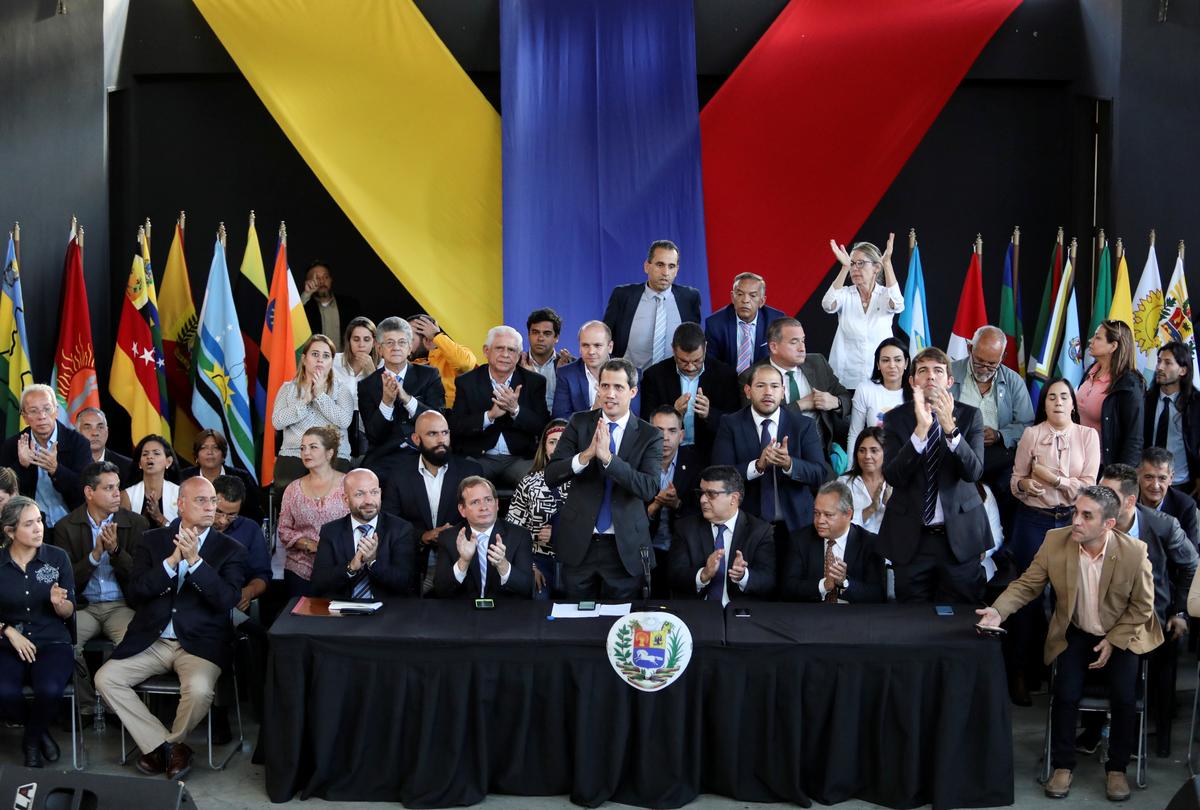 CARACAS (Reuters) – Venezuelan opposition leader Juan Guaido and allied legislators pushed past armed troops and forced open the doors of congress on Tuesday to hold a session two days after the ruling Socialist Party seized control of the body by proclaiming new leadership.

Pro-government legislators on Sunday declared Luis Parra the head of congress after troops in riot shields blocked opposition lawmakers from backing Guaido for a second term, but defiant legislators declared the session null and re-elected him anyway.

Guaido on Tuesday morning argued with troops in riot gear to get into the courtyard of congress, and lawmakers then overpowered the frightened National Guard troops who guarded the tall wooden doors leading to the floor of parliament.

“Brave legislators today literally opened the doors of democracy,” Guaido said in an afternoon meeting of lawmakers at a meeting hall in eastern Caracas. “Today, the legislators gave a great victory to the people of Venezuela.”

He announced a rally on Saturday and called on supporters to join legislators in returning next Tuesday to congress, signaling continued confrontation with Socialist Party officials who are seeking to take over the last major state institution not under their control.

Guaido also demanded an “urgent meeting” with Defense Minister Vladimir Padrino to explain the heavy military presence in congress. Troops on Sunday blockaded large parts of downtown Caracas and pulled Guaido down from wrought-iron gates outside parliament as he tried desperately to climb inside.

Earlier Tuesday, pro-government legislators held a brief session led by Parra – who was sworn in by allies of President Nicolas Maduro as parliament chief Sunday.

The session included a debate over proposals to tackle widespread shortages of gasoline and ended in under an hour.

Pro-government deputies left the floor of parliament just before Guaido arrived. Parra was later seen running through the courtyard in an apparent effort to avoid crossing paths with Guaido.

Socialist Party lawmaker Francisco Torrealba on state television accused the opposition of violently breaking into congress, and insisted the institution was still controlled by Parra.

Venezuela’s National Assembly President and opposition leader Juan Guaido, who many nations have recognised as the country’s rightful interim ruler, gestures as he arrives to hold a news conference in Caracas, Venezuela January 7, 2020. REUTERS/Fausto Torrealba

Parra’s swearing in Sunday marked an escalation of Maduro’s crackdown on the opposition whose key international ally, the Trump administration, has so far been unsuccessful in its year-long attempt to oust Maduro through economic sanctions and diplomatic pressure.

But Maduro’s move suggests he does not expect major consequences from the United States, though the government has steered clear of actions – like arresting Guaido – that could provoke a harsher response.

Parra last year was expelled from the First Justice opposition party in late 2019 due to corruption allegations, which he has denied.

Dozens of countries, including the United States, denounced Parra’s appointment as illegitimate, and said they continued to recognize Guaido as the parliament’s head and as Venezuela’s rightful president.

Washington is now considering sanctions on Parra and more than a dozen other lawmakers who took part in Maduro’s bid to wrest control of congress, two people familiar with the matter told Reuters.

Guaido was elected head of the congress in January 2019 and invoked Venezuela’s constitution to assume an interim presidency, denouncing Maduro as a usurper who had secured re-election in a 2018 vote widely considered fraudulent.

So far, Maduro has fended off Guaido’s challenge, retaining control of the armed forces and tightening the noose around opposition lawmakers. More than 30 of Guaido’s congressional allies are in hiding, in prison, or in exile.