Posted By: Elizabeth Melimopoulos 2 weeks ago 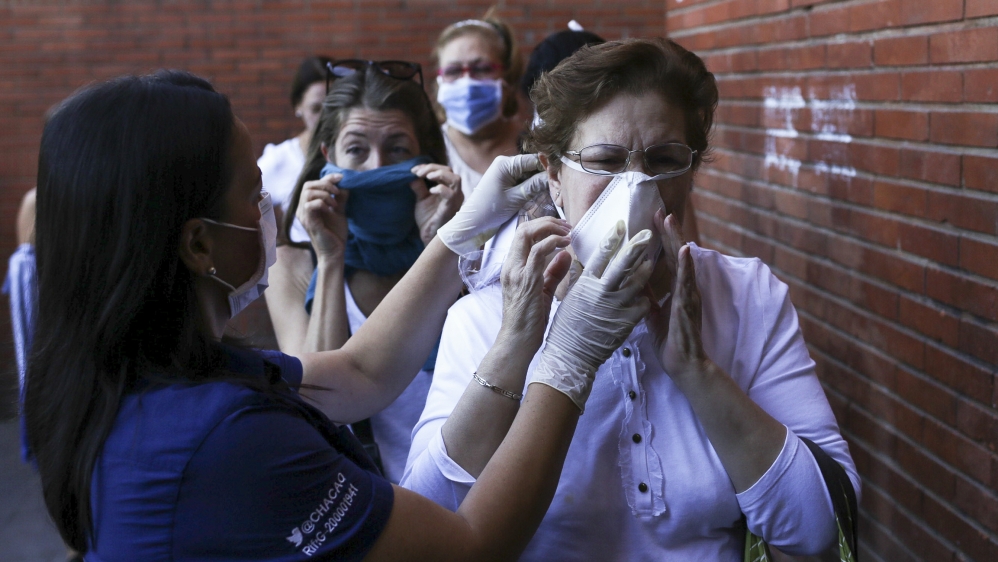 Even before the coronavirus pandemic swept across the world, healthcare professionals in Venezuela contended with an endless shortage of medicine and equipment.

The worst nightmare of Venezuelan healthcare professionals came true earlier this month when COVID-19 was detected in the country. Since then, at least 70 cases of the virus have been confirmed in Venezuela, increasing anxiety in a crisis-stricken country where the healthcare system lacks infrastructure and resources to treat basic diseases.

“We are facing an unknown disease, without knowing what the behaviour will be in our country,” said Dr Oscar Noguera, an internist and director of Ancora Humanistas, a nongovernmental organisation in Venezuela.

“Health personnel are already complaining about the lack of adequate clothing for their protection, while the increased emigration of doctors and nurses has left our hospitals in a vulnerable condition,” he told Al Jazeera. “The number of intensive care beds available in the country is barely close to 80.”

In an attempt to contain the outbreak, President Nicolas Maduro imposed a nationwide quarantine and restricted travel between states.

“We are preparing for the most dire situation we’ve ever faced before,” Maduro said on state television earlier this month. “All of the country will enter a quarantine. It is indispensable and necessary, and it is the answer.”

But such measures have done little to quell the anxiety that comes with the coronavirus.

“There is anguish, fear, and uncertainty as all the system has paralysed, but we also understand it’s time to remain calm,” Rosa*, a lawyer and professor from Bolivar State, told Al Jazeera.

The president also encouraged people to wear face masks, even if it meant improvising them, and he banned people from boarding the metro or taking trains without one.

“Since the outbreak, we have witnessed nervous purchasing, if you go to a pharmacy seeking for [disinfecting] alcohol or a mask you cannot find one,” said Luis*, a professor in the state of Tachira.

Meanwhile, some analysts warned that the quarantine is not a feasible option for a lot of people, as many operate in the informal economy.

“The quarantine poses a dilemma between producing [and surviving] or guarding and protecting yourself,” Carlos Pina, a Venezuelan political analyst, said.

The country has not confirmed any deaths linked to COVID-19, but the outbreak has come at a time when Venezuela is already suffering from one of the region’s worst humanitarian crises.

Venezuela’s health system is among the worst in the world in its capacity to respond and mitigate a pandemic, according to the Global Health Security Index.

Treatable diseases such as diphtheria, measles and malaria have continued to spread.

Venezuela’s government said the US sanctions are hurting the administration’s ability to buy medicines and food, while they have led to banks and foreign businesses to refuse services.

US officials maintain that the sanctions do not prevent the government from buying food or medicine.

“The ability to respond to the pandemic depends on the state in which the public health apparatus is, and Venezuela is currently experiencing a complex humanitarian emergency,” said Rafael Orihuela, doctor and former minister of health in Venezuela.

“To avoid the virus from escalating is impossible. We must prepare for the hard scenario of an increase of infections and deaths from coronavirus in Venezuela,” he told Al Jazeera. “As the country is today, it is hard to think that we will be able to get out of the danger of the virus alone,” he added.

President Nicolas Maduro encouraged people to wear face masks, even if it meant improvising them [AFP]

Venezuela’s government turned to the International Monetary Fund for five billion dollars in financing to strengthen the country’s health system.

“This is a crucial moment, and knowing the aggressive and highly contagious levels of this disease, we will take quick and forcible measures to stop its propagation,” Maduro said in a letter to IMF.

But the IMF rejected the request, arguing his government was not recognised by the international community. Venezuela has been locked in a political crisis for more than a year, with the US and more than 50 other countries recognising opposition leader Juan Guaido as the country’s interim leader.

Maduro is now seeking a smaller one-billion-dollar rescue package, according to Bloomberg News.

“From Venezuela’s soul, we want to thank the People’s Republic of China and President Xi Jinping for this generosity,” Vice President Delcy Rodriguez said last week at Caracas International airport where she received the aid.

Rodriguez also said that the World Health Organization (WHO) would provide medical supplies and technical assistance for the embattled country.

“We thank the WHO, who has confirmed that it will provide help to Venezuela as we are in a special condition. We are a country, illegally sanctioned, criminally blocked,” she said last week. Maduro also said that Russia was planning to send a donation in medical equipment and [testing] kits.

Trap inside and outside Venezuela

Venezuelan is, however, not just feeling the effects at home.

According to the United Nations, 4.5 million people have left the country since 2015.

Many who have fled lack healthcare, and with borders now closed, many feel more vulnerable than ever.

“The population that may feel most vulnerable is those that migrated by land (using a bus or by foot) to countries like Colombia, Ecuador, Peru or the Dominican Republic,” said Pina, the Venezuelan analyst.

“In these cases, many Venezuelans not only do not have health insurance, but also live from their daily work and therefore they are the ones who are most exposed, exposing themselves to being infected,” he said.

Inside the country, it is also challenging as many of them feel trapped in a situation where there are not many alternatives.

“Many families seem to feel helpless because the new government measures force them to be confined at home,” Pina said.

According to Pina many Venezuelans that live in the borders with Colombia and Brazil often go to these countries to satisfy their basic needs, including food or fuel, while many also work on the other side of the border.

“Quarantine measures are taken to prevent the spread of the virus, however, the economic consequences for the country can be disastrous. With this outbreak, the country could be entering a new phase of a humanitarian crisis,” Pina added

For Rafael Wong, a paediatrician and an infectious disease specialist in Bolivar State, the worry is not just for his patients, but also for fellow health professionals.

“We have to remember that statistically, our risks of acquiring the disease is higher, so when I do my daily job, I cannot have another feeling but that of concern,” he told Al Jazeera.

“However, I cannot let that take over, I carry on with my daily duties, and I do that in my best capacity,” he added.

“On our end, we also need to be careful, if we get sick we won’t be able to help, and we will become a burden for our own colleagues, so we need to really be careful, give our best, and demand the best conditions.”

*Name has been changed at the request of the individual to protect his/her identity.

According to the United Nations, 4.5 million people have left the country since 2015 [Schneyder Mendoza/AFP]