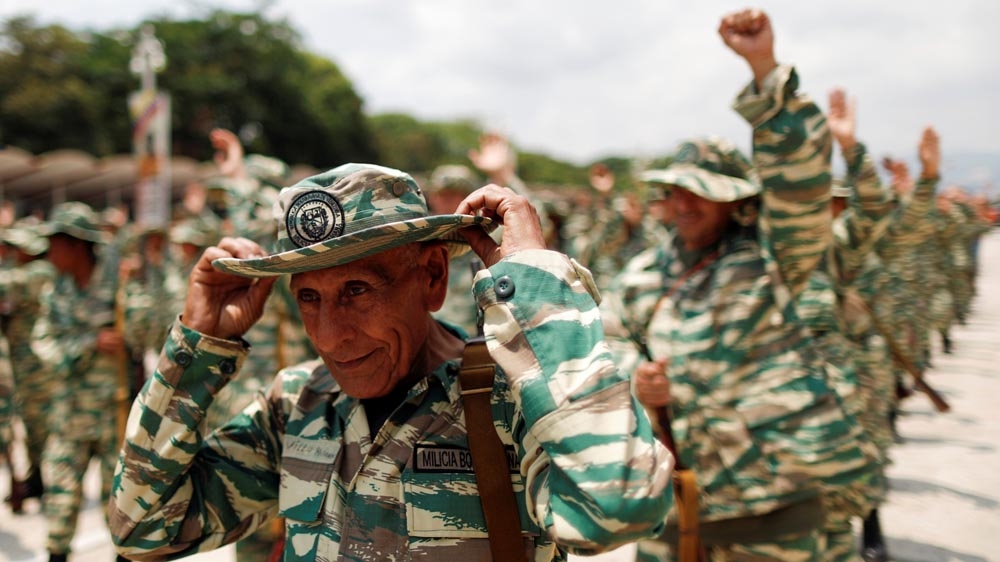 Venezuela’s civilian militia has officially been made part of the country’s militray [File: Carlos Garcia Rawlins/Reuters]

Venezuela has designated its civilian militia as part of the country’s military, according to the country’s official gazette, an administrative change that on paper at least will vastly expand the armed forces that have been crucial in keeping President Nicolas Maduro in power.

The militia now stands as a branch of the armed forces alongside the army, navy, air force and national guard. Maduro in January said the militia has 3.7 million members, compared with around 150,000 active members of the other branches.

But the change does not appear to have a significant practical effect because the militia has existed since 2008 and its members do not have the same professional training as active members of the principal armed forces components.

Videos of militia training sessions routinely become the butt of social media jokes for appearing disorganised and being largely made up of senior citizens.

The militia will be expected to “organise, equip, train and indoctrinate the people in order to contribute to the security of the nation”, according to the government’s Official Gazette dated February 1 and seen by Reuters News Agency but not yet officially released.

The military has been crucial in allowing Maduro to retain power despite a hyperinflationary economic crisis that has led nearly five million people to leave the country. Troops have participated in violent crackdowns of opposition protests and military intelligence has been active in snuffing out potential uprisings.

The militia, created by late socialist leader Hugo Chavez as part of a broad reorganisation of the armed forces, has played a significantly less important role. Its members are often seen working as security guards at government offices such as hospitals or metro stations, and frequently appear at government rallies.

Maduro says the militia is a crucial element of the country’s security in the face of potential aggression by the United States, which has imposed a broad sanctions programme against his government in efforts to force him from power.

“The militia is the popular and armed wing of the people and the armed forces,” Maduro said in a speech in January. In April, the president ordered the militia to get involved in agriculture to boost the country’s food supply.