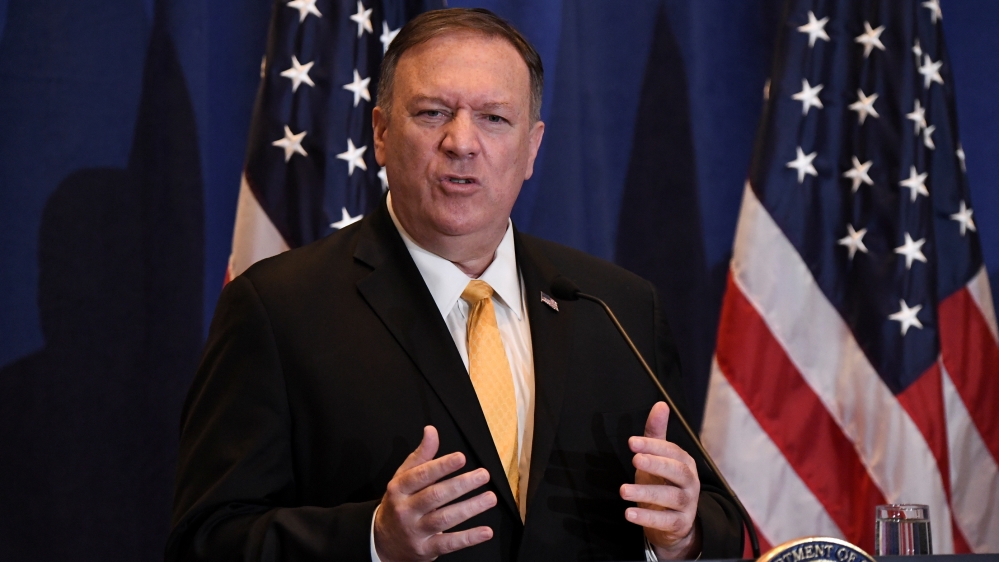 US Secretary of State Mike Pompeo on Monday accused Cuba and Venezuela of attempting to “hijack” democratic protests in Latin America, vowing that Washington would support countries trying to prevent unrest in the region from “morphing into riots”.

Amid recent demonstrations in a number of countries in the region, Pompeo stepped up allegations that Cuba and Venezuela had helped stir up unrest but offered few specifics to back his comments.

Pompeo cited recent political protests in Bolivia, Chile, Colombia and Ecuador and said that Colombia had closed its border to Venezuela out of concern that protesters from the neighbouring country would enter.

“We in the Trump administration will continue to support countries trying to prevent Cuba and Venezuela from hijacking those protests and we’ll work with legitimate (governments) to prevent protests from morphing into riots and violence that don’t reflect the democratic will of the people,” Pompeo told an audience at the University of Louisville, in Kentucky.

Protesters have taken to the streets of Chile for nearly two months in what started as student-led protests over a subway fare hike and have since mushroomed into wider demonstrations against inequality and the government’s crackdown on protesters.

In Colombia, protesters have participated in a series of “national strikes” over a variety of issues, including rumoured labour reforms, violence against Indigenous and social leaders and what many consider the failed implementation of the 2016 peace accords.

In Ecuador, Indigenous leaders and their supporters protested for nearly two weeks earlier this year before striking a deal with the government to cancel a disputed austerity package. And in Bolivia, weeks-long protests over October’s disputed election results and Evo Morales’s subsequent resignation continue.

Protests have swept across other countries including Peru and Argentina.

US relations with communist-ruled Havana have deteriorated since President Donald Trump took office in January 2017. His administration has steadily rolled back parts of the historic opening under Trump’s Democratic predecessor, Barack Obama.

The tension has focused especially on Havana’s support for Venezuela’s socialist President Nicolas Maduro, who has overseen an economic collapse and stands accused by the United States of corruption and human rights violations.

The United States and more than 50 other countries have recognised Venezuelan opposition leader Juan Guaido as the legitimate president. Guaido invoked the constitution to assume a rival presidency in January, arguing Maduro’s 2018 re-election was a sham.

But Maduro retains the support of the military, runs the government’s day-to-day operations and is backed by Russia, China and Cuba. He has accused the US and Guaido of attempting a coup.

In his speech on Monday, Pompeo said Maduro was “hanging on” and would continue to work to suppress the Venezuelan people, but that he was confident the Venezuelan president’s leadership would end.

“The end will come for Maduro as well. We just don’t know what day,” Pompeo said.