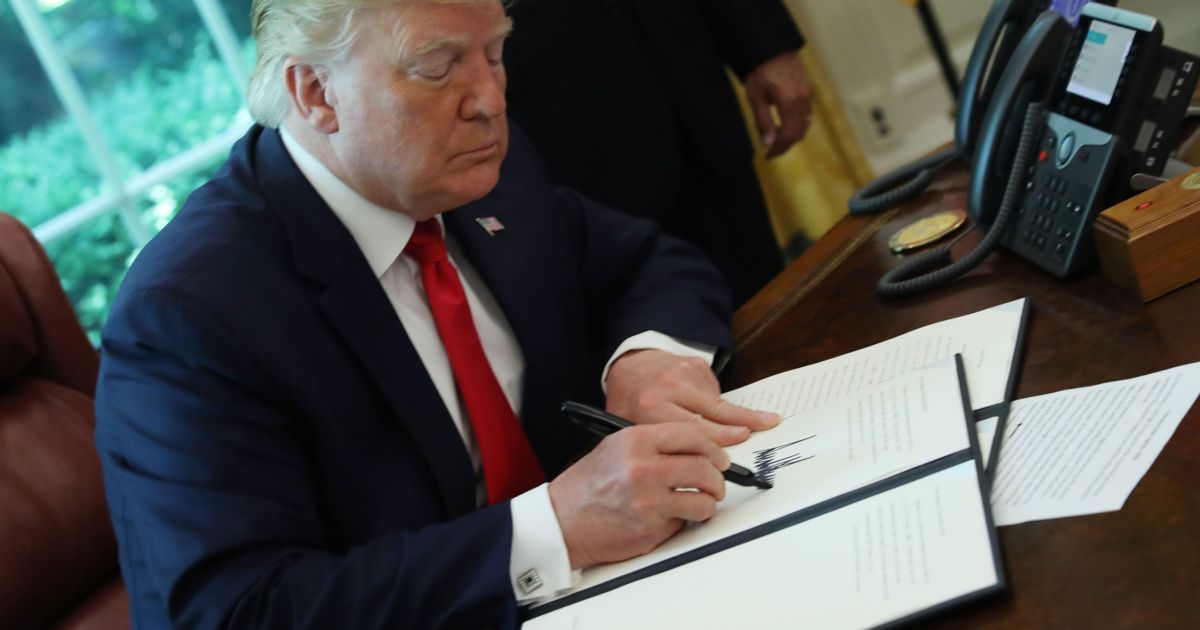 The Trump administration’s unilateral withdrawal from the Iran nuclear pact with world powers in 2018 and its subsequent ‘maximum pressure’ campaign of sanctions targeting Iran’s economy failed to coerce Tehran back to the negotiating table [File: Mark Wilson/Getty Images]

Former United States President Donald Trump’s administration unleashed a torrent of economic sanctions on individuals and entities during his single term in the Oval Office. The punitive measures were aimed at squeezing the US’s foes – most notably Iran, Venezuela and China – to advance Trump’s foreign policy agenda.

But sanctions often failed to achieve their objectives, and critics charge that the acceleration of sanctions on some countries near the end of Trump’s term was designed to box in newly sworn-in President Joe Biden on key foreign policy matters.

The Trump administration’s unilateral withdrawal from the Iran nuclear pact with world powers in 2018 and its subsequent “maximum pressure” campaign of sanctions targeting Iran’s economy failed to coerce Tehran back to the negotiating table. The relentless barrage of blacklistings backfired in some respects because Iran is once again enriching uranium.

Venezuela’s already decimated economy was also hit with successive rounds of US sanctions in an effort to pressure President Nicolas Maduro out of office and usher in Juan Guaido, who Washington recognises as Venezuela’s interim president.

The Trump administration’s sanctions also drew heavy criticism for exacerbating the hardships of civilians, especially as measures continued to be unleashed during the COVID-19 pandemic when nations were struggling to fund their public health response.

Here is a brief but by no means exhaustive summary and timeline of key sanctions on four nations whose economies were targeted on Trump’s watch.

The US reimposed nuclear-related sanctions targeting Iran’s energy sector, including petroleum-related transactions, as well as transactions by foreign financial institutions with the Central Bank of Iran.

Effective November 5, 2018, the sanctions were imposed after the US withdrew from the 2015 Joint Comprehensive Plan of Action (JCPOA), also known as the Iran nuclear deal, in May 2018.

The US Department of the Treasury sanctioned an Iran-based entity, and four people connected to it, for allegedly organising conferences for the country’s Islamic Revolutionary Guard Corps (IRGC) for “efforts to recruit and collect intelligence from foreign attendees, including US persons”.

By means of an executive order, Trump announced sanctions on Iran’s Supreme Leader Ayatollah Ali Khamenei and the Office of the Supreme Leader.

The order added that any individual “appointed by the Supreme Leader” would also be sanctioned.

On the same day, the US Treasury said eight members of the IRGC’s navy, ground forces and aerospace division would also be sanctioned.

The Trump White House imposed sanctions on Iran’s metal and steel industries and some senior leaders, following Tehran’s attack on US two military bases in Iraq – made in retaliation for the US killing of Iranian General Qassem Soleimani.

The sanctions target the nation’s steel industry, as well as eight senior Iranian officials, and other sectors of the economy, including mining, construction, manufacturing and textiles.

In the same month, the Atomic Energy Organization of Iran and its director, Ali Akbar Salehi, were also placed under US sanctions.

The US imposed sanctions on several Iranian authorities, including its interior minister, accusing them of engaging in serious cases of human rights abuses.

It alleged that Interior Minister Abdolreza Rahmani Fazli gave orders authorising the Law Enforcement Force of Iran to use lethal force in response to anti-government protests in November 2019, leading to the killing of protesters, including at least 23 minors.

The US Treasury announced another round of sanctions that effectively shut Iran out of the global financial system.

Eighteen major Iranian banks were blacklisted, including 16 targeted for “operating in Iran’s financial sector”; one for being controlled by a sanctioned Iranian bank; and one for being affiliated with Iran’s military, according to the Treasury.

The Trump administration sanctioned Mohammad Baseri and Ahmad Khazai, two intelligence officers from the Iranian Ministry of Intelligence, for their alleged role in the 2007 abduction and probable death of retired FBI agent Robert Levinson.

On January 13, the US blacklisted two Iranian foundations it said are controlled by Supreme Leader Ayatollah Ali Khamenei and their subsidiaries, saying the institutions enabled Iran’s elite to sustain a “corrupt” system of ownership over large parts of the economy.

On January 15, the US imposed sanctions on three Iranian entities for alleged conventional arms proliferation and on firms in Iran, China and the United Arab Emirates for doing business with the company Islamic Republic of Iran Shipping Lines.

The US Treasury sanctioned Venezuela‘s chief judge and seven other members of the country’s Supreme Court of Justice as punishment for seizing powers from Venezuela’s opposition-led National Assembly in early 2017.

The judges had their assets frozen within US jurisdiction, and the US barred American citizens from doing business with them.

On August 25, the US Treasury restricted the trading of Venezuelan bonds sold by Venezuela’s government in US financial markets. The Treasury also prohibited US financial institutions from engaging in new purchases or trade with Venezuela’s state oil company, Petroleos de Venezuela (PDVSA).

On May 18, the US sanctioned former Venezuelan government official Diosdado Cabello Rondon – regarded as an ally of President Nicolas Maduro, and considered the second most powerful person in the country after Maduro – for “narcotics trafficking, money laundering, embezzlement of state funds, and other corrupt activities”.

Following opposition figure Juan Guaido’s self-proclamation as the interim president of Venezuela on January 23, the US hit PDVSA with sweeping sanctions in a move aimed at pressuring Maduro to cede power to his opponents.

The sanctions stopped PDVSA from collecting the proceeds of oil exported to US customers, while also freezing the assets of PDVSA’s units, including Citgo, its US-based subsidiary.

On April 17, the US sanctioned the Central Bank of Venezuela “to prevent it from being used as a tool of the illegitimate Maduro regime”.

“Treasury will continue to target corrupt Maduro insiders, including those tasked with conducting diplomacy and carrying out justice on behalf of this illegitimate regime,” Treasury Secretary Steve Mnuchin said.

Trump signed an executive order imposing an economic embargo against Venezuela, freezing all Venezuelan government assets in the US and barring transactions with the country’s authorities.

“Every country that has investments in the US should be very worried because this sets a dangerous precedent against private property,” Venezuelan Vice President Delcy Rodriguez said in response to the sanctions.

On September 20, Washington imposed sanctions on the Equipment Development Department (EDD) of the Chinese defence ministry, and its director Li Shangfu, over the purchase of S-400 surface-to-air missiles and Sukhoi Su-35 jets from Russia.

The sanctions triggered a visa ban and prohibited the EDD and its director from conducting transactions with the US financial system.

The legislation, passed unanimously by both houses of the US Congress, requires the US State Department to certify at least once a year that Hong Kong retains enough autonomy to qualify for the special US trading consideration that helped it become a world financial centre.

The law also provides for sanctions against officials responsible for human rights violations in Hong Kong.

The US imposed sanctions on Chen Quanguo, a member of China’s powerful Politburo, and three other senior officials, accusing them of serious human rights abuses against the Uighur Muslim minority.

Chen is the Communist Party Secretary in the far western region of Xinjiang, where the United Nations estimates that about one million Uighurs have been detained in reeducation camps that China describes as vocational skills training centres necessary to combat “extremism”.

The Politburo member is the highest-ranking Chinese official to be hit by US sanctions so far.

A Chinese police officer takes his position by the road near what is officially called a vocational education centre in Yining in the Xinjiang Uighur Autonomous Region in China [File: Thomas Peter/Reuters]

On November 10, the US sanctioned four Hong Kong and Chinese mainland officials for threatening the peace and security of Hong Kong.

On November 28, sanctions were imposed on Chinese and Russian companies that Washington said had supported the development of Iran’s missile programme.

The four firms were accused of “transferring sensitive technology and items to Iran’s missile programme”.

The companies were subjected to a new US investment ban forcing US investors to divest holdings of the blacklisted firms by November 11, 2021.

In partnership with Canada and the European Union, the US sanctioned more than a dozen Russian officials and businesses, citing Moscow’s “continued aggression in Ukraine”.

The US imposed fresh sanctions on Russia over the 2018 poisoning of former double agent Sergei Skripal, an attack that took place in the United Kingdom.

A police officer guards a cordoned-off area in the city centre where former Russian intelligence officer Sergei Skripal and his daughter Yulia were found poisoned, in Salisbury, the United Kingdom [File: Hannah McKay/Reuters]

The US blacklisted a subsidiary of Russian state oil major Rosneft that the Trump administration said provided a financial lifeline to the government of President Nicolas Maduro in Venezuela.

Ramzan Kadyrov, the regional strongman leader of Russia’s Chechen Republic, was sanctioned over human rights violations, barring him from travelling to the US.

International human rights groups have accused Kadyrov and his lieutenants of abductions, torture and killings of their opponents.