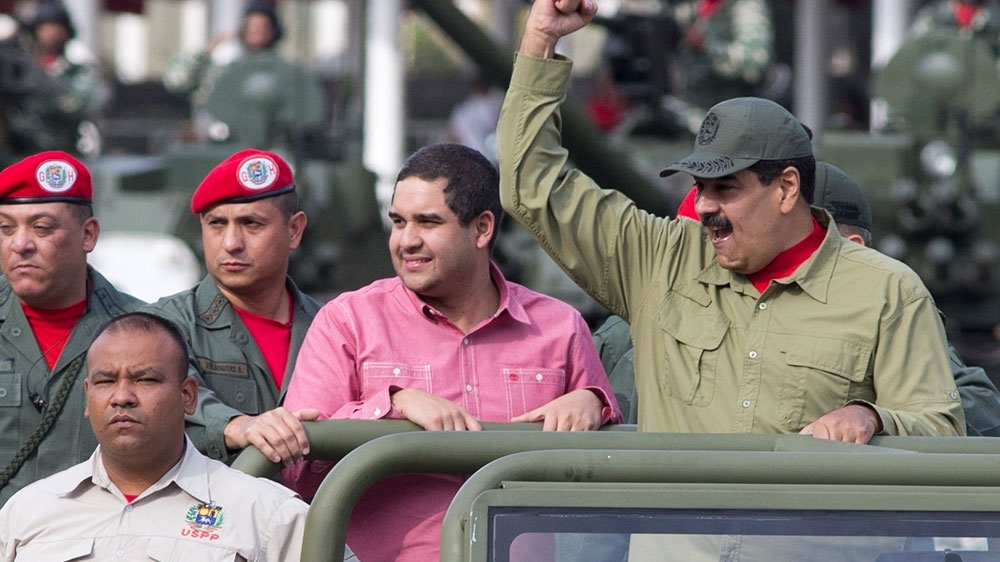 The Trump administration on Friday announced sanctions on the son of Venezuelan President Nicolas Maduro in a move to increase pressure on family members of top officials backing Maduro and suspected of corruption.

The action by the US Treasury Department freezes any US assets belonging to Nicolas Maduro Jr and prohibits US nationals or American institutions from doing business with him.

“Maduro’s regime was built on fraudulent elections, and his inner circle lives in luxury off the proceeds of corruption while the Venezuelan people suffer,” said Treasury Secretary Steven Mnuchin.

“Maduro relies on his son Nicolasito and others close to his authoritarian regime to maintain a stranglehold on the economy and suppress the people of Venezuela. Treasury will continue to target complicit relatives of illegitimate regime insiders profiting off of Maduro’s corruption.”

Until recently, the 29-year-old Maduro Jr kept a low profile as a little-known flutist in Venezuela’s world-famous network of youth orchestras. But his political career took off shortly after his father was elected president in 2013 and he was named to lead a newly created corps of inspectors of the presidency, fueling allegations of nepotism.

He’s also a member of the constitutional assembly, a rubber-stamping rival of the opposition-controlled congress charged with rewriting the nation’s charter. In 2017, he delivered a fiery speech from the assembly vowing to storm the White House in response to President Donald Trump’s threat of military force to remove his father from power.

His sanctioning marks the start of a new strategy targeting family members of insiders.

A senior US administration official said the Trump administration is considering expanding actions against family members of Maduro officials as part of its focus on corruption by the socialist leader’s top allies.

To date, the Trump administration has sanctioned more than 100 top government officials and other insiders accused of corruption, human rights violations and drug trafficking, including Maduro himself and his wife, Cilia Flores.

The official spoke on condition of anonymity due to lack of authorisation to discuss the matter on the record.

Maduro Jr, who closely resembles his father and is known almost universally as “Nicolasito” – or “Little Nicolas” – is also a leader in the ruling socialist party’s youth wing and previously was coordinator of the government-run film school, despite having no known previous experience in cinema.

According to the US Treasury Department, Maduro Jr has also been involved in propaganda and censorship effort and has profited from Venezuelan mines along with Maduro and Flores. Treasury also alleges that he helped devise a strategy this year to pressure Venezuela’s military to deny humanitarian aid from entering the country by characterizing it as an attempt to undermine democracy.

He also allegedly worked to increase censorship of Venezuela’s telecommunications infrastructure, framing the censorship as necessary because of US Government activities.

There was no immediate response from Maduro Jr, his father or any other government official.