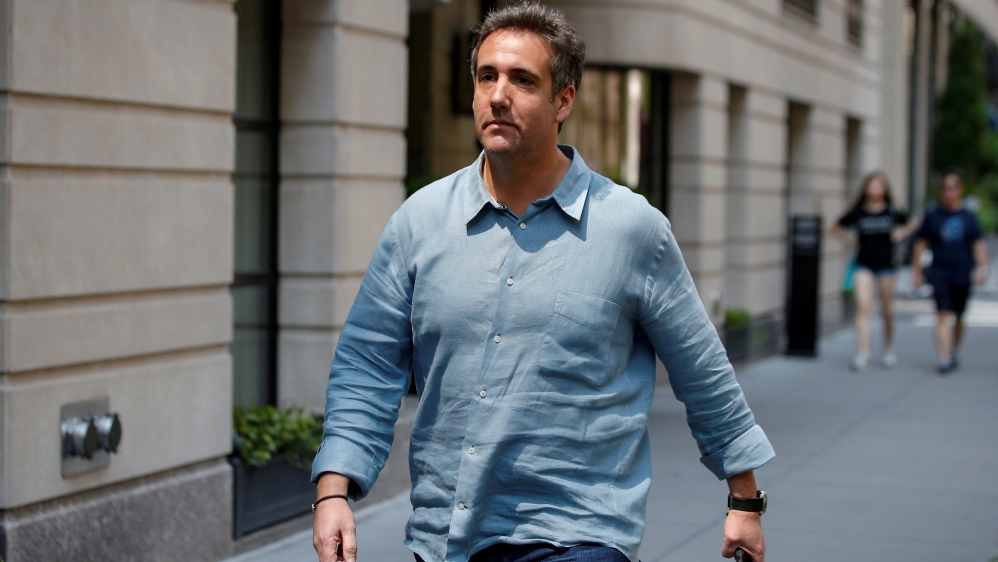 Michael Cohen once said he would ‘take a bullet’ for President Trump, now he is planning to publish a tell-all book [File: Brendan McDermid/Reuters]

A federal judge on Thursday ordered President Donald Trump’s former lawyer Michael Cohen released from prison on Friday and returned to home confinement after suggesting during a court hearing that prosecutors sent Cohen back to prison as retaliation for planning to publish a book about the president just before the November election.

Cohen was sent home from prison in May because of the coronavirus pandemic. He was shackled again on July 9 after he questioned an agreement that barred him from publishing his book, engaging with news organisations and posting on social media.

Judge Alvin Hellerstein said he had never seen in his 21 years on the bench a provision barring a prisoner from speaking to the media. “How can I take any other inference but that it was retaliatory?”

Cohen has been in solitary confinement in a federal prison in Otisville, New York, about 70 miles (110 km) northwest of New York City.

“Michael Cohen is currently imprisoned in solitary confinement because he is drafting a book manuscript that is critical of the President of the United States – and because he recently made public that he intends to publish this book shortly before the upcoming election,” Cohen‘s lawyers, who include attorneys from the American Civil Liberties Union, wrote in seeking an order for his immediate release.

Prosecutors on Wednesday said in court papers that Cohen was “antagonistic” during the July 9 meeting with probation officers and should remain behind bars.

Cohen took issue with nearly every provision of an agreement that would have let him finish his sentence at home, prosecutors said. Among the provisions were the media ban, electronic monitoring and approval for employment.

Jon Gustin, a BOP official, said in a court filing that he made the decision to send Cohen back to prison.

“In my view, Cohen‘s behavior and, in particular, his refusal to sign the conditions of home confinement was unacceptable and undermined his suitability for placement on home confinement,” Gustin wrote.

Gustin said he was not aware of Cohen‘s book.

Adam Pakula, the probation officer who drafted Cohen‘s agreement, said he based it on terms for the supervision of high-profile inmates that he got from a fellow officer, including the provision on media contact.

Pakula also said he was not aware of Cohen‘s book at the time.

Cohen, who once said he would “take a bullet” for Trump, was sentenced in 2018 for directing hush payments to pornographic film star Stormy Daniels and former Playboy model Karen McDougal, who claimed they had affairs with Trump. Trump has denied having the encounters.

Cohen served a year of his three-year sentence before being released in May.

In a friend-of-the-court filing,10 law professors said the government cannot jail a critic for exercising his right to free speech under the US Constitution.

The professors noted the Trump administration’s “disparate treatment of its allies and prior attempts to silence or retaliate against critics of the President.”