Posted By: William Roberts 2 months ago 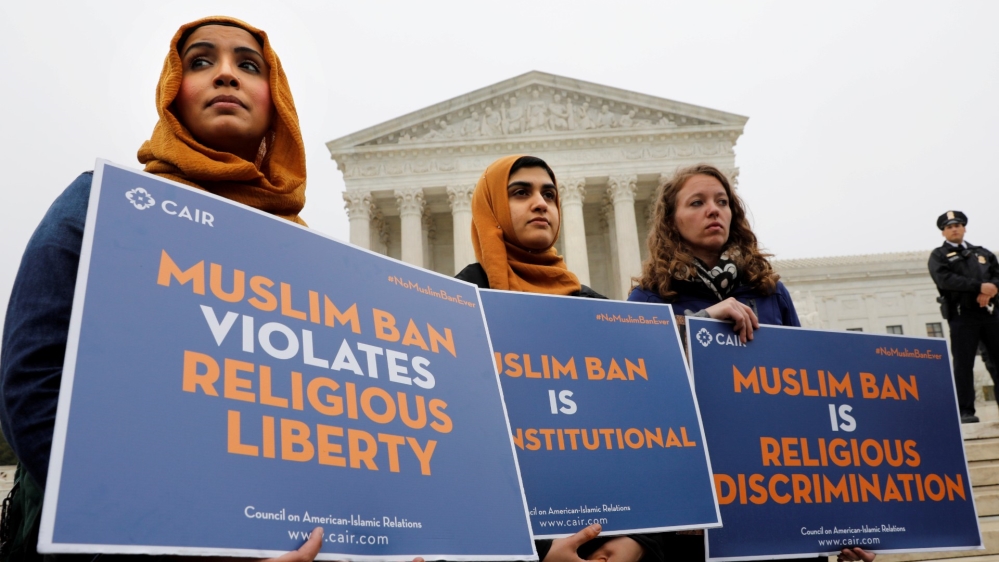 The bill, called the NO BAN Act, was broadly supported by Democratic legislators but is unlikely to advance in the Senate because of opposition from Republicans and the White House.

The bill expands anti-discrimination provisions in US immigration law and would limit the ability of US presidents in the future to bar entry based on religion.

Today, the House passed the #NoBanAct because no one should be discriminated against or singled out based on the faith they practice. I will end President Trump’s Muslim Ban on day one and sign this bill into law.

Specifically, the bill would terminate Trump’s executive orders imposing a ban on immigration from mostly Muslim-majority countries. The president’s initial ban targeted Iran, Libya, Somalia, Syria and Yemen, triggering criticism that it amounted to unlawful religious discrimination. Trump then expanded the ban to include Venezuela and North Korea, and later added Nigeria, Sudan, Myanmar and three other countries to the list.

In Wednesday’s debate, Democrats plan to share stories from dozens of their American constituents who have seen family members prevented from entering the US for arbitrary reasons under the ban.

The legislation, however, is unlikely to be embraced in the Republican-led Senate, which means prospects for its passage this year are dim. Instead, it appears the issue will be fought out in the US presidential election contest.

On Monday, Democratic presidential candidate Joe Biden, who is courting Muslim votes, told a Muslim political organisation that he would reverse the ban if elected president “on day one”.

Biden appeared by video at a two-day virtual conference hosted by Emgage Action and attended by 3,000 Muslim-American voters.

“Muslim communities are the first to feel Donald Trump’s assault on Black and brown communities in this country, with his vile Muslim ban. That fight was the opening barrage in what has been nearly four years of constant pressure and insults,” Biden told the group.

“If I have the honour of being president, I will end the Muslim ban on day one,” Biden said.

Wa’el Alzayat, CEO of Emgage Action, a Muslim-American civic engagement and political mobilisation organisation, said, “Biden’s vow to end the Muslim ban on the first day of his presidency is poignant.”

“It exemplifies his commitment to ending this form of institutionalised Islamophobia that has caused great pain to global Muslim communities,” Alzayat told Al Jazeera.

In a political speech at the White House last week, Trump cited his travel ban as he sought to draw distinctions between himself and Biden.

Trump accuses Biden of wanting to “end all travel bans, including from jihadist regions”, and he implied Biden would allow “people that are going to come in and blow up our cities, do things”.

But that rhetoric belies the facts and data about how the travel ban has been implemented to effectively prohibit immigration from predominantly Muslim countries, Khera said.

“Their argument is what Trump has been saying since the get-go – which is, they try to wrap what is blatant bigotry in a shroud of national security which does not meet what the real threat is and is not the reality of who is being excluded from the country,” she said.

The bill would require the US Department of State, in consultation with the Department of Homeland Security, to provide a public report on the numbers of people denied entry from specific countries.

Democrats had planned to bring the NO BAN bill to the House floor for a vote in early March, but pulled the legislation because of the coronavirus that causes COVID-19.

Republicans had planned to attack the legislation as an irresponsible bid by congressional Democrats to prevent Trump from imposing travel bans to limit the spread of the virus.

The bill was amended to provide a “public safety” exception that allows presidents to restrict travel as necessary “to contain a communicable disease of public health significance”.

“We are not too thrilled with that language that was added at the last moment,” said Iman Awad, legislative director for Emgage Action.

The Trump administration, through another executive order issued in April, has effectively shut down immigration to the US at present because of the pandemic.

The legislation to lift the so-called “Muslim ban” was introduced by Democrats in April 2019 and is sponsored in the House by Representative Judy Chu of California and in the US Senate by Chris Coons of Delaware.

The US Supreme Court had ruled in 2017 that the president has the authority to impose the ban under existing US immigration law. During his election campaign in 2015, Trump had called for a “total and complete shutdown of Muslims entering the United States”.