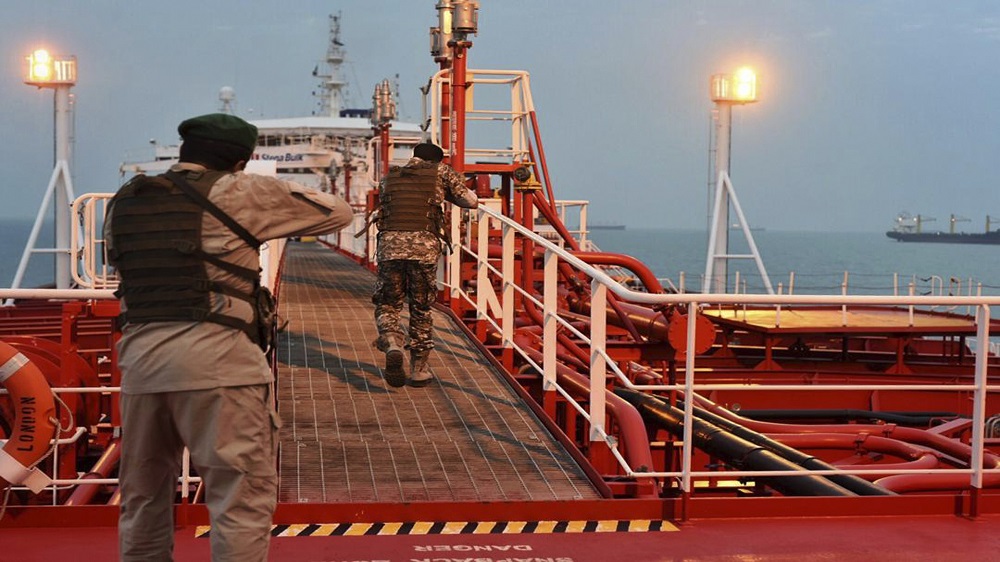 In this July 21, 2019 photo, members of Iran’s Revolutionary Guard inspect the British-flagged oil tanker Stena Impero, which was seized in the Strait of Hormuz [Morteza Akhoondi/Mehr News Agency via AP]

A United Nations agency has acknowledged that a US-sought oil tanker “hijacked” off the coast of the United Arab Emirates (UAE) after allegedly smuggling Iranian crude oil is back in Iranian waters.

The International Labour Organization (ILO) on Sunday said the MT Gulf Sky was hijacked on July 5, citing its captain. That mirrors earlier reporting by The Associated Press news agency.

“The vessel was taken to Iran,” the ILO said. All 28 Indian crew members disembarked in Iran and all but two of the crew without passports flew from Tehran to India on July 15, it added.

The ILO cited the International Seafarers’ Welfare and Assistance Network for its information. The agency earlier filed a report saying the vessel and its sailors had been abandoned by its owners without pay since March off Khorfakkan, a city on the eastern coast of the UAE.

Iranian state media and officials have not acknowledged the hijacking and arrival of the MT Gulf Sky to Iran. The United States government similarly has not commented.

In May, the US Justice Department filed criminal charges against two Iranians, accusing them of trying to launder some $12m to buy the tanker, then named the MT Nautica, through a series of front companies.

The two men charged, one of whom also has an Iraqi passport, remain at large.

A US bank froze funds associated with the sale, causing the seller to launch a lawsuit in the UAE to repossess the vessel, the Justice Department said earlier. That civil action was believed to still be pending, raising questions of how the tanker sailed away from the Emirates after being seized by authorities there.

As tensions between Iran and the US heated up last year, tankers plying the waters of the Middle East became targets, particularly near the crucial Strait of Hormuz, the Gulf’s narrow mouth through which 20 percent of all oil passes.

Suspected mine attacks the US blamed on Iran targeted several tankers. Iran denied any involvement.

Iran seized a British-flagged tanker in the Gulf last year after British forces seized an Iranian tanker off the territory of Gibraltar. Both vessels were released after a months-long standoff.

A flotilla of tankers carrying Iranian fuel for gasoline-starved Venezuela reached the US sanctions-hit nation in June.

The shipments caused a diplomatic standoff between Iran and Venezuela and the US as both nations are under American sanctions.

The US recently beefed up its naval presence in the Caribbean for what it said was an expanded anti-drug operation.