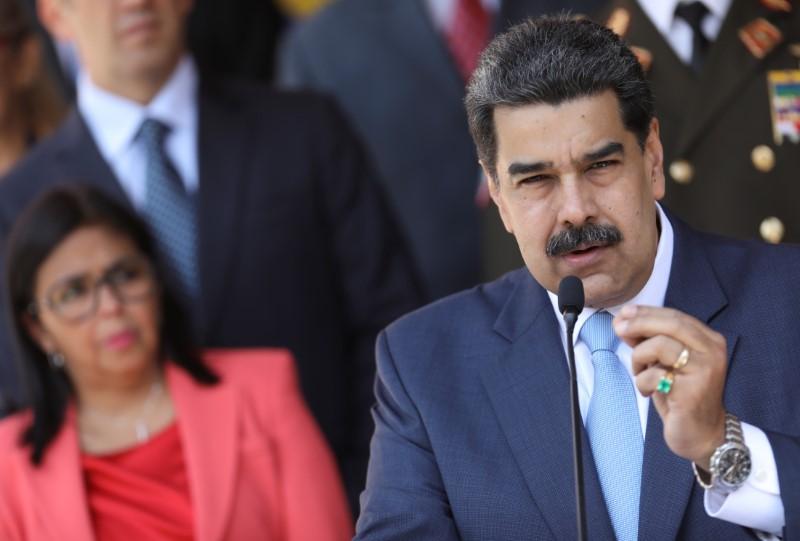 WASHINGTON (Reuters) – The U.S. government on Thursday indicted Venezuelan President Nicolas Maduro and other top Venezuelan officials on charges of “narco-terrorism,” the latest escalation of the Trump administration’s pressure campaign against the socialist leader.

The State Department offered a reward of up to $15 million for information leading to the arrest and conviction of Maduro, who has been in power since 2013.

Attorney General William Barr announced the charges against Maduro, who already faces U.S. sanctions and has been the target of a U.S. effort aimed at pushing him from power.

Venezuela’s information ministry did not immediately reply to an email seeking comment.

Barr accused Maduro and his associates of conspiring with a dissident faction of the leftist Colombian guerrilla group FARC “to flood the United States with cocaine.”

“While the Venezuelan people suffer, this cabal…lines their pockets,” Barr said of Maduro and the more than a dozen others who were indicted. They include Venezuela’s defense minister and the chief justice of the country’s supreme court.

The indictment, a rare U.S. action against a sitting foreign head of state, marks a serious escalation against Maduro by Washington at a time when some U.S. officials have privately said President Donald Trump is increasingly frustrated with the results of his Venezuela policy.

The United States and dozens of other countries have recognized opposition leader Juan Guaido as the country’s legitimate president. But Maduro has remained in power, backed by the country’s military and by Russia, China and Cuba.

U.S. officials have long accused Maduro and his associates or running a “narco-state,” saying they have used drug trafficking proceeds to make up for lost revenue from a Venezuelan oil sector heavily sanctioned by the United States.

The indictments were unsealed in New York, Florida and Washington.