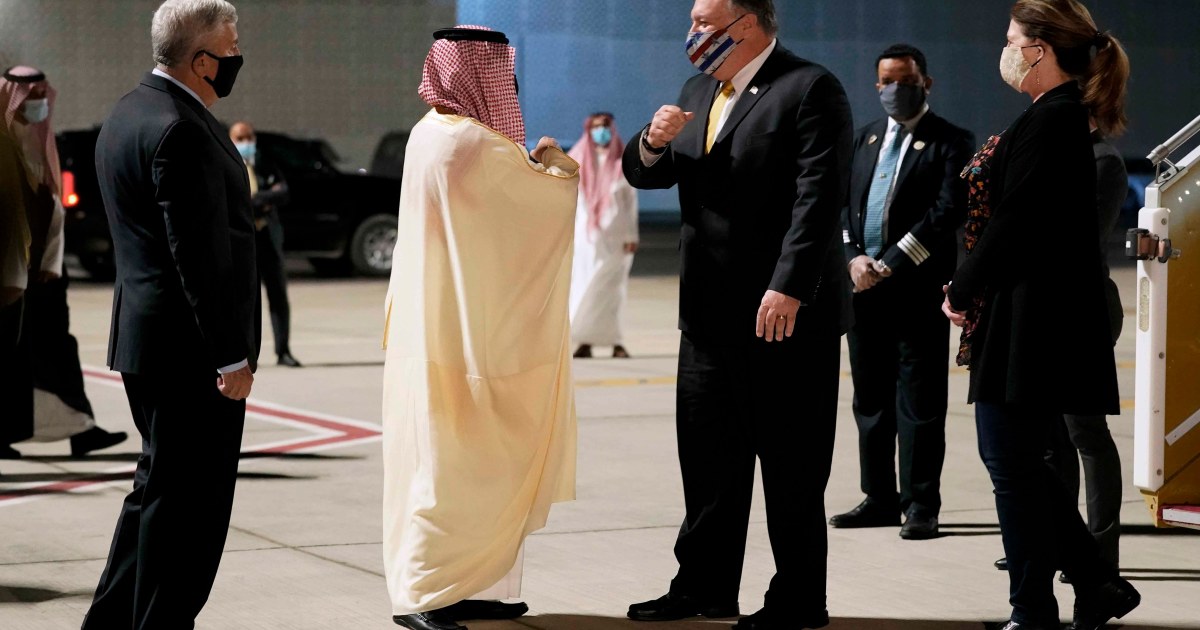 US President Donald Trump has caused much damage by questioning the legitimacy of the US elections and the victory of his opponent, Joe Biden. His refusal to accept the results of the vote has not only caused much trouble at home but it has also undermined the image of the United States abroad and its moral authority to preach smooth power transition and commitment to democratic ideals to foreign leaders.

This, along with the policies he is leaving behind after four years in the White House, is setting up a turbulent transition for Biden at home and most probably a rough start for the new administration abroad, especially in the Middle East.

In recent weeks, Trump’s administration has been giving unprecedented attention to the region. At least four US officials have visited Israel and close Gulf allies in recent weeks: Secretary of State Mike Pompeo, Special Representative for Iran and Venezuela Elliott Abrams, Assistant Secretary for Political-Military Affairs R Clarke Cooper from the State Department and the White House adviser, Jared Kushner.

Meanwhile, Trump has ramped up sanctions on Iran and is suspected of giving a green light for Israel to kill Iranian nuclear scientist Mohsen Fakhrizadeh. A US aircraft carrier group led by the nuclear-powered USS Nimitz has also moved back into the Gulf region. This offensive posture seems linked to US domestic politics rather than to a clear policy objective.

Allies of the outgoing administration in the Middle East may have congratulated Biden, but they are also giving the impression that they will join hands with Trump and the political opposition to the Democratic White House he will soon lead.

Still, they, along with the rest of the Middle East, are gearing up for the Biden presidency. Saudi Crown Prince Mohammed bin Salman now seems inclined to resolve the dispute with Qatar (even though it is not clear yet if he will give this foreign policy win to Trump or Biden) and ease relations with Turkey; he is also more cautious about normalisation with Israel. MBS is aiming to defuse tensions so he can start on the right foot with the Biden administration.

Egypt’s President Abdel Fattah el-Sisi seems to be making conciliatory moves. The Egyptian government has been releasing political prisoners in recent weeks. In Turkey, Erdogan has felt less constrained to let go of his son-in-law Berat Albayrak as finance minister whose primary added value until recently was being the indispensable contact person for Kushner and Trump’s White House. Iran is also trying to avoid escalation in the region, hoping to potentially restore nuclear talks with Biden and get US sanctions relief.

It seems Middle Eastern leaders are expecting Biden’s presidency to be the exact opposite of Trump’s and to bring back aspects of Barack Obama’s. But this may not be the case, as his recent appointments of national security officials have shown. However, the new administration will certainly change the way US foreign policy is conducted in at least three ways.

First, institutional decision making will be restored in Washington. US foreign policy under Trump was dangerously personalised by a leader with narcissistic and authoritarian inclinations, which helped foreign leaders gain more influence in the White House. Officials who challenged his authority were fired from his administration or pushed to resign and those who stayed were loyalists or opportunists. Traditional foreign policymaking was sidelined and so was inter-agency cooperation. Trump did not trust key institutions like the Pentagon and the State Department, which were defunded or marginalised under his administration.

Once Biden and the Democrats are officially in power, Middle East leaders will no longer be able to get their way by exchanging late-night WhatsApp messages with Trump’s son-in-law or pretend the US State Department is a trivial agency. They will have to turn to traditional diplomacy, dealing with the embassies and official emissaries. The re-establishment of this institutional process also means a return to rivalries between US agencies over foreign policy issues, most notably in the Middle East. This will likely slow down the decision-making process in Washington.

Second, the Biden administration will bring back the predictability of US foreign policy. The domestic turmoil of Trump’s presidency – the high-level investigations, the impeachment, the racial tensions, the Twitter rants, the constant change of appointed officials, etc – affected not only US politics but also political dynamics abroad.

Third, there will likely be a major shift in the US priorities in the Middle East. The Biden administration will most likely align with the thinking of the Washington establishment, seeking to pull US resources out of the Middle East to focus on deterring Russia and China, a move that Trump is now making more difficult by antagonising Iran.

The Biden administration will seek to mitigate conflicts across the Middle East and will most probably face resistance from concerned actors looking to maximise their strategic positions. This expected shift of priorities in Washington to deter Russia and China on a global scale will be most probably be viewed by Middle East leaders once again as a sign of weakness and as an affirmation of the limits of US power.

Trump has overly invested in the Middle East with emphasis on a transactional approach, and Middle East leaders should prepare to not to be overindulged by Washington in the next four years. His core approach was the advancement of an Arab-Israeli alliance against Iran at the expense of traditional Arab partners like Jordan, and the support of disparate allies ranging from Turkey’s Recep Tayyip Erdogan to Saudi Arabia’s Mohammed bin Salman.

Unlike Trump, the Biden presidency will most probably be reactive instead of proactive in the Middle East. This means minimal engagement with Iran, complex relations with Turkey and the appeasement of Israel. Biden will be somewhere between Trump and Obama and will have to reckon with Trump’s legacy in the Middle East, which includes new preconditions to strike a deal with Iran and a timid Arab-Israeli normalisation process.

Some Middle Eastern leaders are wary of the coming change in Washington. If the Biden administration sets a new tone in exposing their authoritarianism or goes too far in engaging the Iranian regime, these staunch Trump allies might be inclined to ignore Biden’s demands on human rights issues and exploit their new alliance with Israel to stand their ground. They can directly cooperate with Israel or use its clout in Washington to pressure the Biden administration.

The legacy of the outgoing Trump presidency may offer some opportunities for the new administration moving forward, but the regional challenges will persist. The Trump team has already planted a field of foreign policy landmines in the Middle East and clearing it over the next four years will be a fraught endeavour. Middle East leaders will test Biden early on and the new US president will have to show some spine if he is to be taken seriously over the next four years.