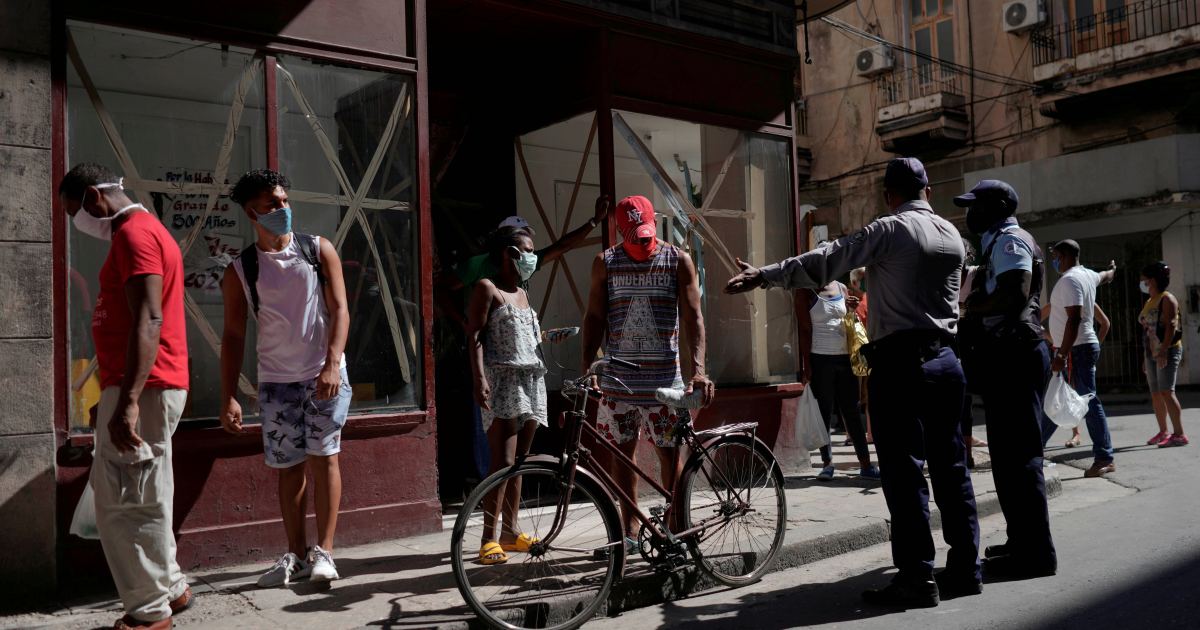 A police officer organizes a line of people waiting to buy food amid concerns about the spread of the coronavirus disease in Havana, Cuba [File: Alexandre Meneghini/Reuters]

The move comes as Trump is trying to lock in the Cuban American vote in the key battleground state of Florida before the November 3 presidential election.

“Today, as part of our continuing fight against communist oppression, I am announcing that the Treasury Department will prohibit US travellers from staying at properties owned by the Cuban government,” Trump said at a White House event on Wednesday.

“We’re also further restricting the importation of alcohol and Cuban tobacco,” Trump said during a ceremony honouring Bay of Pigs veterans and commemorating the 40th anniversary of the 1980 Mariel boatlift that brought 120,000 Cubans to Miami.

Since taking office in January 2017, Trump has sought to unwind a detente with Cuba pursued by his Democratic predecessor, President Barack Obama.

The Treasury Department said at the time that the US would no longer allow so-called “group people-to-people educational travel”, one of the most popular exemptions to the overall ban on US tourism to Cuba.

Earlier this year, the Trump administration also ordered Marriott International to wind down its hotel operations in Cuba.

Starwood Hotels, now owned by Marriott, was the first US hotel company to sign a deal with Cuba since the 1959 revolution after Obama sought to normalise relations with the regime.

“The Cuban regime has been redirecting revenue from authorized US travel for its own benefit, often at the expense of the Cuban people,” said US Treasury Secretary Steven T Mnuchin in a statement on the department’s website. “This Administration is committed to denying Cuba’s oppressive regime access to revenues used to fund their malign activities, both at home and abroad.”

The Trump administration’s sanctions have further crippled Cuba’s economy already struggling from the coronavirus pandemic and a drop in aid from struggling leftist ally Venezuela.

Back in July, communist-run Cuba announced that it was loosening restrictions on small businesses to help stimulate the battered domestic economy.

The Cuban American expatriate community in south Florida is a crucial constituency for Republicans in US presidential elections.

No Republican has won the presidency without Florida since Calvin Coolidge in 1924. Trump will hold a rally in Jacksonville on Thursday.