Posted By: Fox News 10 months ago 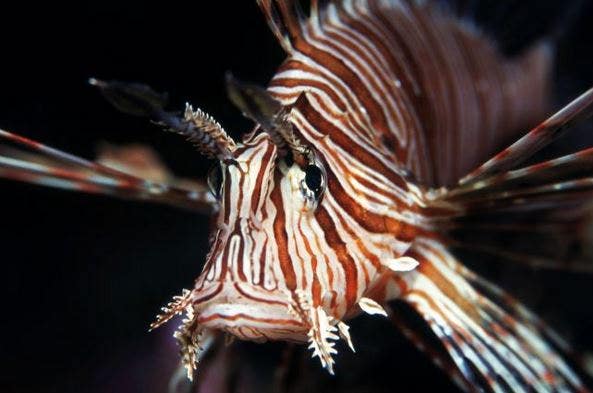 Lionfish are voracious eaters and can expand their stomachs 30 times their original volume to accommodate that appetite. (Shutterstock)

One of the most notorious invasive species around, the lionfish, is known for its voracious appetite and can literally eat its competitors out of an ecosystem. And that’s what the striking fish is doing, feasting its way through waters that stretch from the Gulf of Mexico to the Eastern Seaboard.

Now, scientists and startups are crafting methods for capturing and killing the hungry invaders. But while these new ideas show promise, tried-and-true spearfishing seems to be the most effective way to eradicate lionfish, scientists told Live Science.

“It’s actually hard to describe how a lionfish eats because they do it in a split second,” said Kristen Dahl, a postdoctoral researcher at the University of Florida. Lionfish use a complex series of tactics that no other fish in the world is known to employ. In the blink of an eye, a lionfish goes from silently hovering above its prey to flaring its fins, firing a disorienting jet of water from its mouth, unhinging its jaw and swallowing its meal whole, scientists reported in a study published in 2012 in the journal Marine Ecology Progress Series. The attacks happen so quickly that nearby fish don’t seem to notice.

“It’s actually nice when I’m looking at gut contents,” Dahl said, “because if something has been freshly eaten, it’s in immaculate condition.”

New fish on the block

Lionfish (Pterois volitans) are one of the most notorious invasive species in the United States. Their bold colors and frilly fins make lionfish popular in the aquarium trade; over the past 25 years or so, it seems aquarium fish owners have sometimes dumped unwanted lionfish — which are native to the Indo-Pacific region — into the Atlantic Ocean, according to the National Oceanic and Atmospheric Administration (NOAA). Their popularity in the aquarium trade has also spurred several breeding programs.

Lionfish are fast and powerful, but their biggest advantage is novelty. Atlantic prey fish simply don’t know what’s going on. Biologists call this phenomenon prey naivete, and they believe it is largely responsible for the lionfish’s dramatic success as an invader.

Since the first breeding populations were spotted off the coast of North Carolina in 2000, lionfish have rapidly overtaken coastal environments in the Atlantic Ocean, Gulf of Mexico and the Caribbean Sea.

“Sightings increased rapidly in 2004 along the Atlantic seaboard of the United States,” according to Pam Schofield, research fishery biologist at the U.S. Geological Survey.

“Lionfish sightings quickly spread throughout the Caribbean and then the Gulf of Mexico,” Schofield, who tracks non-native marine fish in U.S. waters, told Live Science. There are now breeding populations in the coastal waters of Venezuela, throughout the coastal Caribbean and the Gulf of Mexico. On the Eastern Seaboard, breeding populations extend into North Carolina, and stray individuals are seen as far north as Massachusetts, Schofield said. Reports of lionfish sightings have tapered off since their peak in 2010, but that’s probably not because their populations have decreased — lionfish are so pervasive that spotting one is no longer noteworthy.

Lionfish aren’t easily caught when traditional fishing techniques are used, so a number of research groups and startup companies are developing novel tools for managing the invasion. These include specially designed traps that lure in lionfish while sparing native species, remotely operated vehicles that allow a human pilot to remotely spear lionfish and autonomous hunting vehicles that use artificial intelligence to find the fish themselves. While some progress has been made in new technologies, spear guns used by scuba divers still seem to be the tool that’s most effective tool at killing them, Dahl said.

Florida’s Fish and Wildlife Conservation Commission, a leader in lionfish management, has a number of incentive programs to entice recreational and commercial scuba divers to harvest lionfish, according to the FWC. The lionfish derby is one of the most successful management tools being used today. At a derby, spearfishing divers spend a day working together to remove as many lionfish as they can. At the larger derbies, organizers award prizes to the teams or individuals who catch the biggest, smallest or most lionfish. “The derbies are a good opportunity to educate people about the lionfish and about the danger of releasing aquarium fish into the wild,” Dahl said. She’s worked and volunteered at dozens of derbies. “If enough people learn about this invasion, maybe there won’t be another ‘lionfish.'”

Culling lionfish one by one will never eliminate the species from the Atlantic, but it can help mitigate their effects. While a single lionfish can eat a lot of native fauna, lionfish wreak havoc on a reef only after their populations reach a certain density, researchers reported in 2014 in the journal Ecological Applications. And the incentives seem to be working. At a handful of popular dive sites in the Florida Keys, recreational divers are so diligent in culling invasive lionfish that it is unusual to see a single one, according to several dive tour operators.

Scientists knew from the start that population growth would eventually taper off as lionfish populations reach the point at which there’s no more food or habitat to support additional individuals. But the number of lionfish in parts of the Gulf of Mexico where Dahl and her colleagues have tracked their populations for several years have actually declined. It’s too early to say what’s behind the change, but Dahl points to a poorly understood parasitic skin lesion that “has put a dent in their population.”

Now, less than two decades since the invasion began, ecologists are still trying to learn enough about lionfish to manage the new invasion.

”We’re not sure if [the population decline] is going to last or if it’s a boom-bust population cycle,” Dahl said. “It could be a little bit of both. We aren’t really sure.”