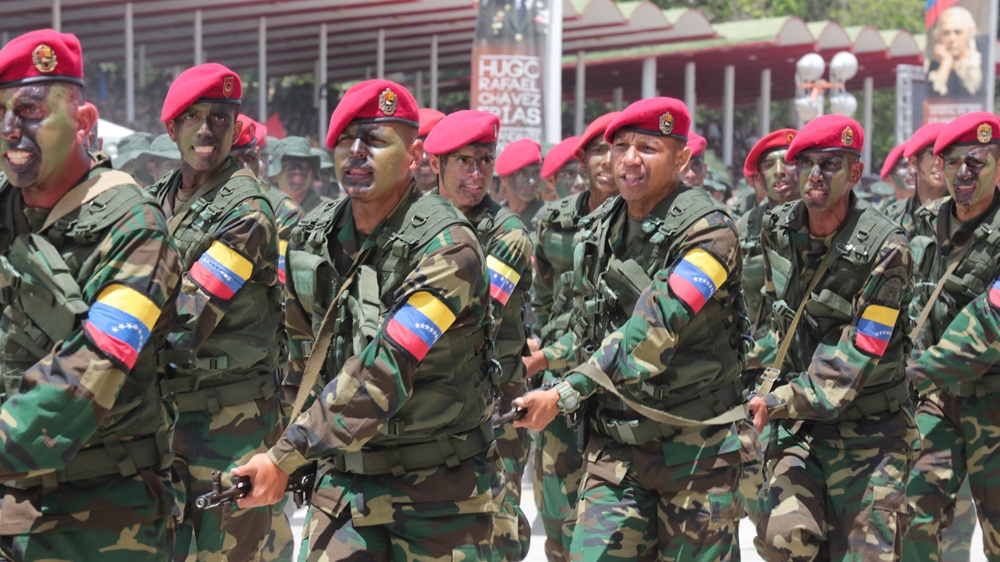 Venezuela‘s bitterly divided political factions have held competing commemorations of the country’s independence, one led by President Nicolas Maduro while the other by the self-proclaimed interim president Juan Guaido.

Speaking to a gathering of top military officials on Friday, Maduro reiterated his support for a negotiation process mediated by Norway between his socialist government and Guaido, who is the leader of the opposition-held National Assembly and claims Maduro’s 2018 re-election was a fraud.

“There is room for all of us within Venezuela,” Maduro said in a speech in Caracas before calling for military exercises on July 24 to defend the South American country’s “seas, rivers and borders”.

“We look to the heavens, asking for peace,” Maduro said. “All the while our military exercises play out. We plead to God with our missiles pointed.”

Venezuela was plunged into a deep political crisis in January when Guaido invoked the constitution to assume a rival interim presidency, calling Maduro a usurper.

He has been recognised as the rightful head of state by dozens of countries, including the United States and most South American neighbours.

But Maduro retains the recognition of Cuba, Russia and China, and remains in control of state functions and the armed forces.

“The key [in all of this situation] is with the military, and today’s event show that the military support remains solid and strong,” Luis Vicente Leon, and economist an analyst said.

Meanwhile, Guaido held a separate independence day event, calling on supporters to march toward the headquarters of the military counterintelligence directorate, or DGCIM, where navy captain Rafael Acosta died last month. Opposition leaders and family members said he was tortured in custody.

A new round of Norway-mediated talks expected for this week was also called off after Acosta’s death.

On Friday, Bachelet said her teams had been working on the report, which covers a period from January 2018 nearly to the present, for a long time. She insisted upon the validity of the reporting, based on hundreds of interviews and meetings with government officials, Maduro’s opponents, as well as victims, their relatives, rights defenders and many others.

She also expressed hope that the report could help pave the way toward improvements in the rights situation in Venezuela, and noted that they now have a physical office in Venezuela – access not granted for many years.

“There is no longer any valid euphemism to characterise this regime other than dictatorship,” Guaido told reporters earlier on Friday. “The systematic violation of human rights, the repression, the torture… it is clearly identified in the (UN)report.”

“While the regime is cornered and left alone, we must remain firm and united until victory,” he wrote on Twitter.

However, some citizens showed dissapointment with Guaido’s direction this time.

“Guaido needed to keep the people animated and out in the streets, but the [street] support has been in frank fall,” Jose Meza, a Venezuelan analyst and journalist said.

“I believe diplomatic negotiations are needed, and other kind of strategy should be adopted.”

“The content of this report is incomprehensible, dominated by a selective and biased vision,” Deputy Foreign Minister William Castillo said.

“It’s a text lacking in scientific rigor, with serious errors in methodology and which seems like a carbon copy of previous reports.”

Also on Friday, the government of Chile barred the entry to “more than 100” Venezuelans linked to the “dictatorship” of Maduro.