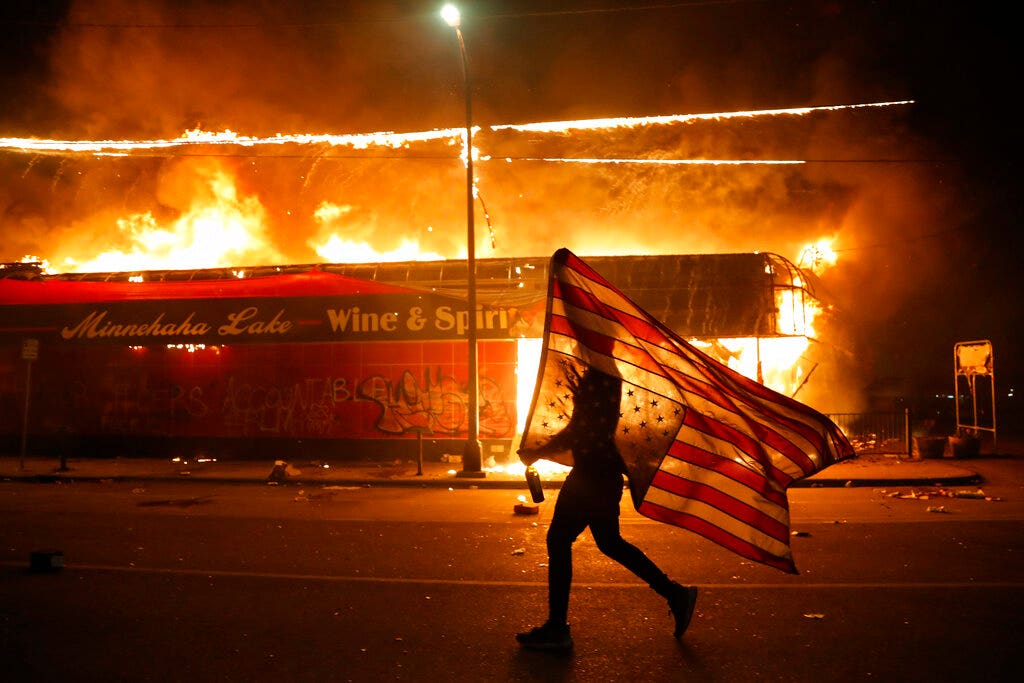 A protester carries the carries a U.S. flag upside, a sign of distress, next to a burning building Thursday, May 28, 2020, in Minneapolis. Protests over the death of George Floyd, a black man who died in police custody Monday, broke out in Minneapolis for a third straight night. (AP Photo/Julio Cortez)

Good morning and welcome to Fox News First. Here’s what you need to know as you start your day …

Minneapolis rioters set police precinct on fire in third night of violence after George Floyd’s death
The Third Precinct police station in Minneapolis was set ablaze Thursday night as violent protests continued in the city — and other cities across the U.S. — following Monday’s death of George Floyd, a black man who died while in police custody.

In response, more than 500 members of the National Guard were heading to the Twin Cities region, called in by Gov. Tim Walz, the Star Tribune of Minneapolis reported.

The Third Precinct police station in Minneapolis was set ablaze Thursday night as violent protests continued in the city — and other cities across the U.S. — following Monday’s death of George Floyd, a black man who died while in police custody. (Fox 9)

Rioters broke into the precinct around 10 p.m. local time, after police on the rooftop previously tried to disperse the gathering crowd using “flash bang” shots and tear gas, according to reports.

The rioters entered the building and sparked the fire after police officers on the roof were rescued by helicopter, reports said.

The precinct is located only a short distance away from where Floyd died Monday. Video images showing Floyd lying in the street, with a police officer’s knee against his neck, sparked outrage across the nation. Four police officers connected to the incident were fired Tuesday. Click here for more on our top story.

Trump blasts Minneapolis mayor, vows military support if needed
President Trump took to Twitter early Friday to vow military support for the governor of Minnesota after another night of violent protest in Minneapolis, which included a police station being overrun and set on fire.

“I can’t stand back & watch this happen to a great American City, Minneapolis,” Trump tweeted. “A total lack of leadership. Either the very weak Radical Left Mayor, Jacob Frey, get his act together and bring the City under control, or I will send in the National Guard & get the job done right.

A second tweet continued, “These THUGS are dishonoring the memory of George Floyd, and I won’t let this happen. Just spoke to Governor Tim Walz and told him that the Military is with him all the way. Any difficulty and we will assume control but, when the looting starts, the shooting starts. Thank you.” Click here for more.

“If you do not have any repository symptoms such as fever, cough or runny nose, you do not need to wear a mask,” Dr. April Baller, a public health specialist for the WHO, said in a video on the world health body’s website posted in March. “Masks should only be used by health care workers, caretakers or by people who are sick with symptoms of fever and cough.”

The recommendation has not changed and differs from the Centers for Disease Control and Prevention (CDC), which urges individuals to wear a mask or face-covering in public settings, regardless of infection or not, to limit the spread of the virus. Click here for more.

THE LATEST FROM FOX BUSINESS
Mark Cuban lays out his plan to boost post-COVID economy: ‘Give people checks that they have to spend.’
Debate over $600 in jobless aid to intensify as claims rise.
Tyson Foods will shut US pork plant as more workers catch COVID-19.
Tesla’s Elon Musk hits $769 million payday.

#TheFlashback: CLICK HERE to find out what happened on “This Day in History.”

Not signed up yet for Fox News First? Click here to find out what you’re missing.

Click here to find out what’s on Fox News and Fox News Radio!

Fox News First is compiled by Fox News’ Bryan Robinson. Thank you for making us your first choice in the morning! Try to stay positive. Stay safe, stay healthy, and be smart about this coronavirus crisis — we will get through this together. We’ll see you in your inbox first thing Monday morning.