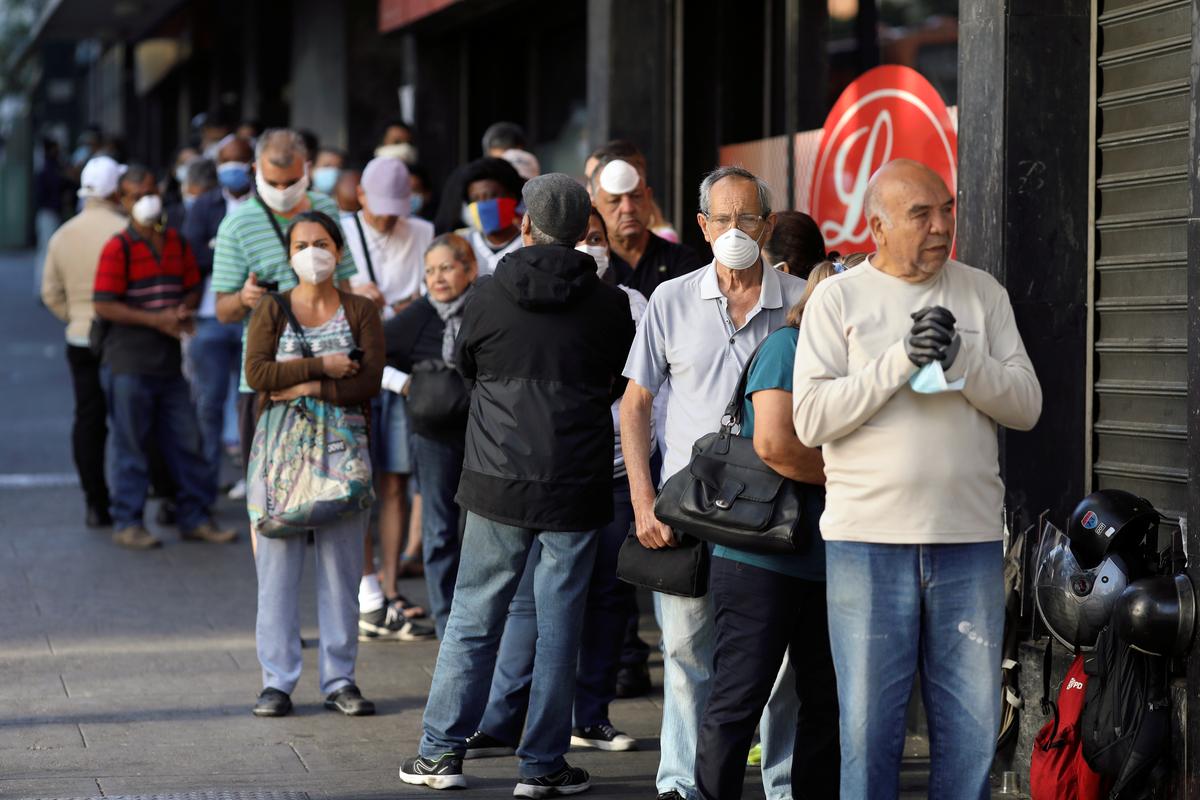 CARACAS (Reuters) – Roadblocks across Venezuela snarled the transportation of goods on Tuesday and businesses in the capital Caracas reported that food deliveries failed to arrive, in signs that a national coronavirus quarantine could worsen a humanitarian crisis.

People queue in front of a supermarket during the first day of a national quarantine in response to the spreading coronavirus disease (COVID-19) in Caracas, Venezuela March 17, 2020. REUTERS/Manaure Quintero

President Nicolas Maduro on Monday expanded a limited quarantine to the whole of the South American nation, which has been hit by U.S. sanctions. Vice President Delcy Rodriguez on Tuesday said the country had detected three new cases, bringing the total number of coronavirus cases in the country to 36.

Medical experts warn that the decay of Venezuela’s health system during a six-year economic collapse will hamper Maduro’s attempts to control the spread of the virus, which has already killed more than 7,400 people around the world.

According to a letter published by the foreign ministry on Tuesday, Maduro has asked the International Monetary Fund (IMF)for $5 billion in emergency financing to “strengthen” the health system against the virus, the first time he has sought IMF aid during his seven years as president.

The IMF said in a statement it was “not in a position to consider this request,” noting there was no “clarity on recognition” of Maduro’s government among its member countries. Most Western democracies call Maduro a dictator who is usurping power after rigging a 2018 re-election vote.

But according to Reuters witnesses in seven states, security forces at checkpoints were holding up trucks carrying food, gasoline and other basic goods between regions.

At the border between Caracas and Miranda state, a dozen armed soldiers wearing face masks were blocking traffic and turning back most vehicles. Several dozen heavy goods vehicles were queuing to enter Caracas as soldiers searched their cargo, though a Reuters reporter saw none pass.

“We are stuck with a very limited supply of fuel and food,” said Carlos Albornoz, head of an association of Venezuelan meat and milk producers.

Albornoz said authorities were stopping producers from delivering food across the whole country, and so far the government had not issued them with any sort of permission to pass through checkpoints unhindered.

Inside Caracas, the military and police also cut off access to key thoroughfares, restricting movement for residents, who Maduro had ordered to stay at home.

But many Venezuelans said they could not afford to stay indoors as they relied on daily income to buy enough food to feed their families.

Businesses in Caracas reported on Tuesday that expected food deliveries had failed to arrive. The owner of a delicatessen in the up-scale Chacao district told Reuters his delivery truck, loaded with cheese and milk from the western state of Zulia, was stuck at checkpoints en-route.

At another market in Caracas, the Bicentenary market, several hundred people queued to enter, most wearing masks, anxious to buy supplies.

“I don’t know what’s going to happen to us,” said Jose Herrera, a 33-year-old metro worker.

“It’s not a secret that a country like ours does not have the right conditions to deal with a pandemic,” he said, citing the example of Italy, which despite a developed health system has reported over 2,000 deaths from the virus.

The impact of the quarantine was also felt in Venezuela’s struggling health sector.

Some health professionals said they could not reach the hospitals where they work because of the roadblocks. Ana Rosario Contreras, president of Caracas’ nursing school, said she registered at least five cases of nurses who were unable to work this morning, despite carrying identification.

In the states of Zulia and Tachira, bordering Colombia, the lock-down also worsened long-standing shortages of petrol as authorities shut most gas stations to all customers, except government officials, doctors and vehicles transporting food.

“Everything is shut, there’s no movement between states, and even less by the border,” said Juan Restrepo, head of a group coordinating transport between Venezuela and Colombia. “We’re desperate because we need to work.”