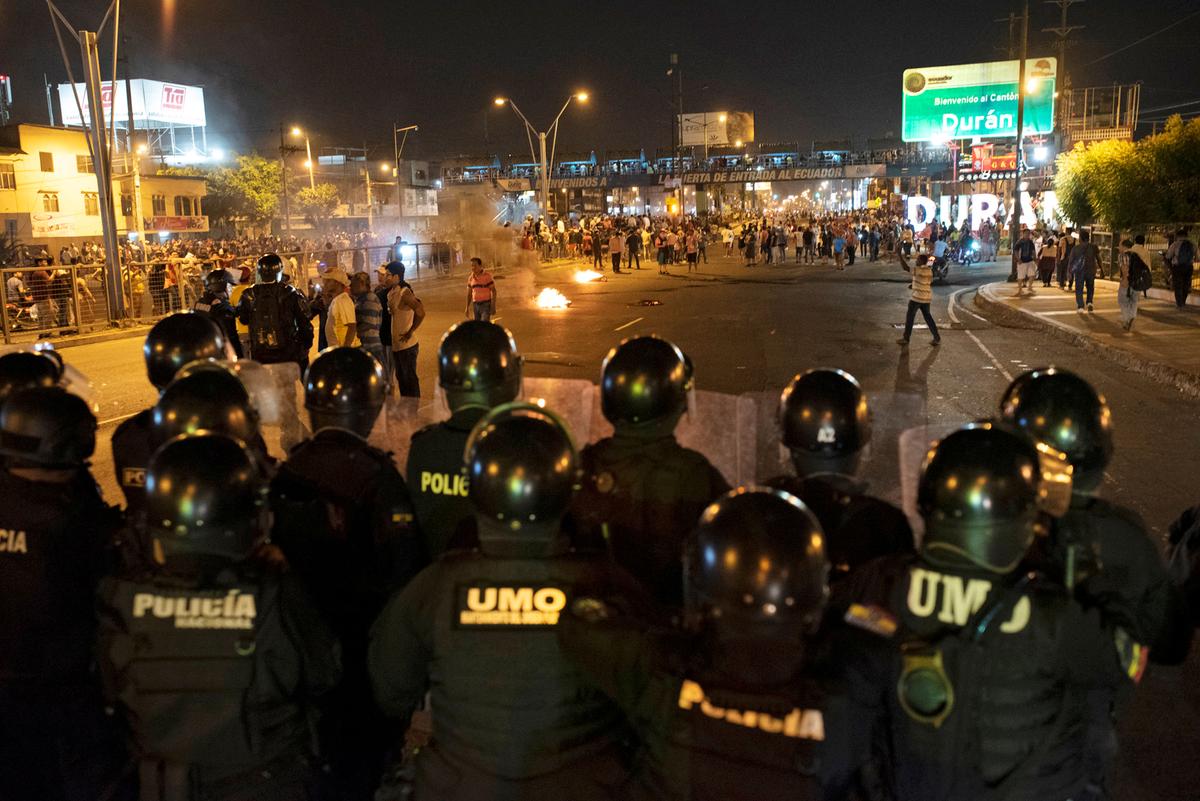 QUITO/GUAYAQUIL (Reuters) – Ecuador’s government sought foreign mediation via the United Nations or the Catholic Church on Tuesday, after almost a week of anti-austerity protests that have forced the government to move from the capital and brought hundreds of arrests.

Thousands of indigenous demonstrators have converged on the highland capital, Quito, and were planning to march near the heavily guarded presidential palace on Tuesday.

Facing the biggest challenge to his two-and-a-half-year rule, President Lenin Moreno has declared a state of emergency here and relocated government operations to the coastal city of Guayaquil where there has been less trouble.

“The only response is dialogue and firmness at the same time,” presidency secretary Juan Roldan told local radio, saying authorities were open to receiving help from the United Nations, the Catholic Church or university rectors.

Officials say the number of arrests has risen to 570.

Protests erupted last Thursday when the government cut fuel subsidies here as part of a package of economic reforms, in keeping with a $4.2 billion International Monetary Fund (IMF) loan.

Indigenous groups and others have been barricading roads with burning tires, rocks and branches, while police have deployed armored vehicles, water cannons and tear gas in response.

Among those detained were a Congress member who supports Moreno’s predecessor Rafael Correa, said Roldan.

Moreno has accused the leftist Correa, his one-time mentor and boss when he was vice president, of seeking a coup with the help of Venezuela’s President Nicolas Maduro.

“They want to turn Ecuador into Venezuela,” Roldan said.

Moreno had enthusiastically backed Correa during his decade-long rule but broke with him after winning a 2017 election to succeed him, and moved economic policies to the right.

Speaking in Belgium, where he lives in self-exile, Correa told Reuters the accusation against him was nonsense.

“They are such liars … They say I am so powerful that with an iPhone from Brussels I could lead the protests,” he said, holding up his mobile telephone.

“People couldn’t take it anymore, that’s the reality,” he said, referring to the belt-tightening economic measures.

Maduro, who has presided over an economic implosion and political crisis in Venezuela, has yet to respond to the accusation of involvement in Ecuador.

With protesters swarming around Quito, various government buildings were attacked overnight, authorities said, adding to looting, assaults on farms, and the destruction of ambulances and police vehicles in recent days.

Indigenous groups have also captured some soldiers, while the unrest has affected oil output. Ecuadorean state-run Petroamazonas estimates it could lose some 165,000 barrels-per day (bpd), or one-third, of crude production due to unrest at its facilities.

“There are groups bent on causing chaos and confrontation, endangering democratic order,” a government statement said.

Dialogue was necessary, the statement added, citing possible measures to compensate the impact of fuel price rises, such as credit lines for farmers and transport cooperatives.

Although he enjoys the support of business and the military, Moreno’s popularity has sunk to under 30%, compared with 70% after his 2017 election.

Indigenous-led protests brought down three presidents in the years before Correa’s rule.

Nicholas Watson, managing director of consultancy Teneo, said the next two days would be pivotal as the government sought to mollify protesters.

“A destabilization plan orchestrated by Correa is not far-fetched,” he added in a report. “Correa has a direct interest in forcing Moreno out, not just as political revenge for Moreno’s ‘betrayal’ but in an attempt to dodge multiple judicial investigations currently underway against him and several former lieutenants.”