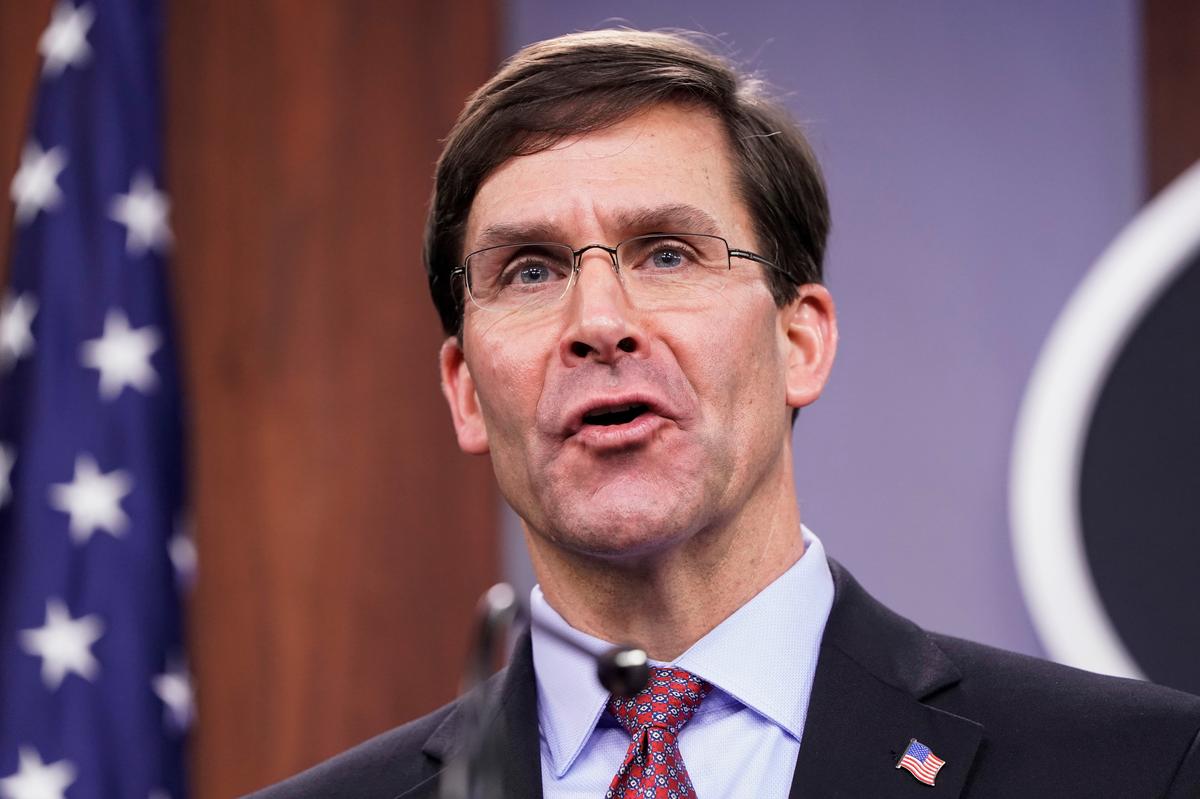 MIAMI (Reuters) – U.S. Defense Secretary Mark Esper suggested on Thursday he could be ready to start a highly anticipated global force repositioning this year as part of an effort to refocus the Pentagon on challenges from China and Russia.

Esper said he did not want to put a firm timeline on the completion of his so-called “defense-wide review,” which is expected to trigger those troop movements.

“If I had to put an end-date (on the review), I want to make sure we are in some type of better posture by the beginning of the next fiscal year,” Esper told reporters, referring to the government’s calendar year for spending, which begins on Oct. 1. “So I want to move fairly quickly.”

Esper made the remarks during a trip to Miami as he began a review of military missions in Latin America, part of a sweeping global examination of deployments that he hopes will allow him to redirect more forces to Asia and send others back to the United States from overseas.

Many experts say the effort is overdue, given military advances in China during the past two decades as America focused on counter-terrorism operations in Iraq, Afghanistan, Syria and elsewhere.

Still, at a time of heightened tension with Iran and Iran-backed groups, it’s unclear how big of a shift can be expected, particularly in an election year.

The review is being closely watched by proponents of U.S. military engagement in Latin America and Africa – two of the typically worst-resourced regions for the U.S. military.

The Africa review sessions, another of which is slated for Friday, are already triggering expectations within the Pentagon of at least a modest reduction in U.S. troops in West Africa, where many U.S. officials are concerned about the growing strength of Islamist militants. No decisions have been made.

A significant reduction in U.S. forces dedicated to U.S. Southern Command could be felt quickly. U.S. deployments to Latin America for activities like training are often measured in the dozens, instead of the thousands that can move in and out of the Middle East.

Esper sought to ease any concerns on Thursday as he visited the Miami-based Southern Command headquarters.

“Everybody always assumes that when we talk reviews, it means reduction. Not necessarily,” he said.

“That’s one of the notions I’ve been trying to dispel … While it may mean right-sizing, it also could mean the addition of forces into a region, if we need them.”

As the U.S. military seeks to more aggressively address China, Southern Command is arguing that Latin America should be central to that effort.

Chinese naval port calls have increased 70 percent in the past five years in the region, and Beijing is ramping up weapons sales, infrastructure investment and trade with Latin American countries, according to U.S. military data.

Southern Command counted $615 million in Chinese weapons sales to Venezuela alone over the past decade.

Still, it’s unclear whether those arguments will sway Pentagon leadership, which is seeing similar trends globally.

One U.S. official, speaking on condition of anonymity, noted that there had been other rounds of cuts and reprioritizations at Southern Command.

Fewer analysts on some issues, and a shifting focus to growing challenges from Russia and China, means “we’re assuming risk in a number of areas in order to meet the present challenge,” the official added. “And that’s what you do.”