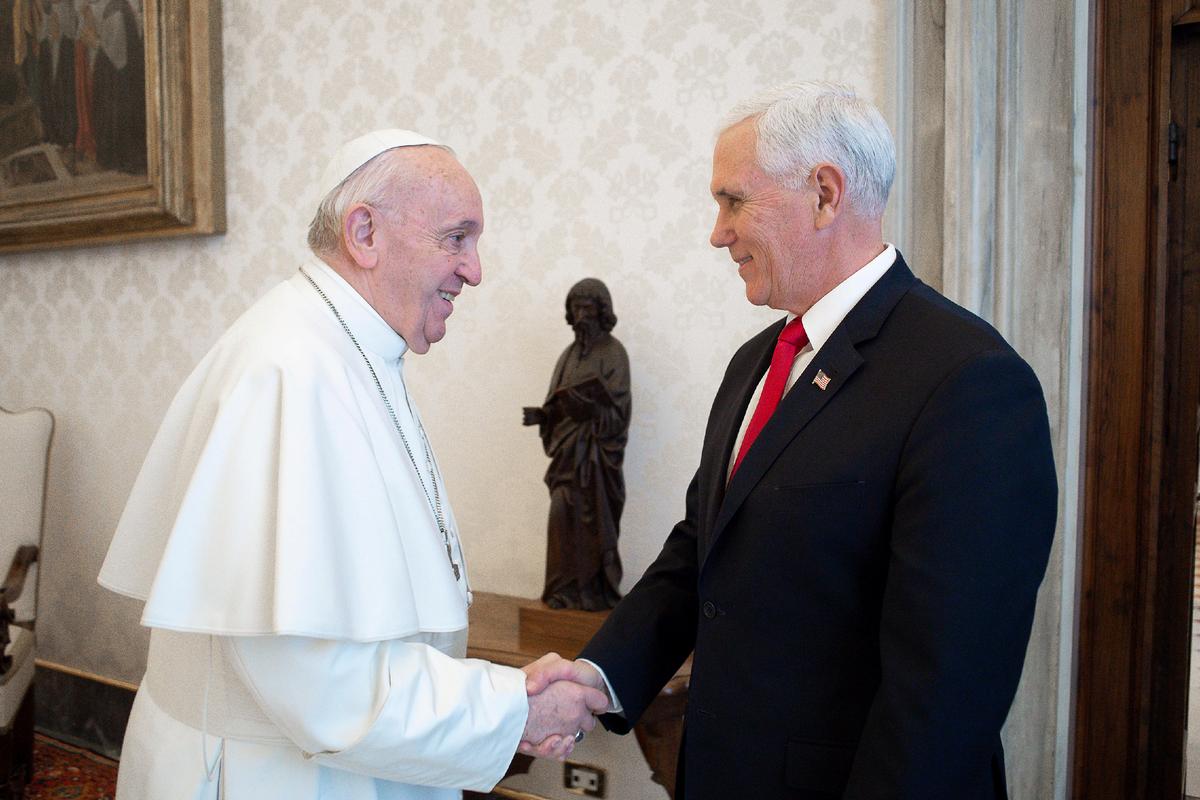 VATICAN CITY (Reuters) – U.S. Vice President Mike Pence, a former Catholic, held an unusually long meeting with Pope Francis on Friday and quipped that he emerged from the encounter feeling like “a hero”.

Pence’s talks with Francis in the papal library lasted about an hour, twice as long as the meeting between the pope and U.S. President Donald Trump in the same frescoed room in May 2017.

During an exchange of gifts after the private talks, Francis gave Pence a small white box with a papal medal inside.

“I didn’t want to ask,” Pence said with a laugh as the pope handed him the box. “This is for mom.”

As he was leaving the papal library, Pence, still clutching the small white box, said: “Thank you, Your Holiness, you have made me a hero … God bless you.”

Pence, who had a strict Irish Catholic upbringing but later converted to evangelical Protestantism, appeared to be referring to the fact that the rest of his family had stayed in the Roman Catholic Church and that his departure from the faith had put some strain on family relations.

During their private talks, Pence and the pope discussed, among other topics, Friday’s “March for Life” anti-abortion demonstration in Washington, the vice-president’s office said. Trump will become the first U.S. president to attend the annual rally.

Thousands of people from around the country converged on the nation’s capital for the event, which began in 1973 after the U.S. Supreme Court, in its Roe v. Wade decision, established a woman’s constitutional right to have an abortion.

After meeting the pope, Pence discussed global hot spots, including the situation in Venezuela, in separate talks with the Vatican Secretary of State, Cardinal Pietro Parolin, Pence’s office said.

Francis also gave Pence some of his recent writings, including his World Day of Peace message for this year and Pence gave the pope a wooden cross made from a tree in the vice president’s official residence.

“I want to extend the warmest greetings on behalf of President Donald Trump, who so enjoyed his visit here,” Pence said at the start of their meeting.

Pence introduced his wife Karen to Pope Francis. He also introduced the rest of the delegation, including U.S. Ambassador to the Vatican Callista Gingrich and her husband Newt Gingrich, the former speaker of the U.S. House of Representatives.

He was later given a tour of the Sistine Chapel.

From the Vatican, he went to meetings with Italy’s President Sergio Mattarella and Prime Minister Giuseppe Conte.

Pence flew to Italy from Israel, where he had attended events commemorating the 75th anniversary of the liberation of the Auschwitz death camp.