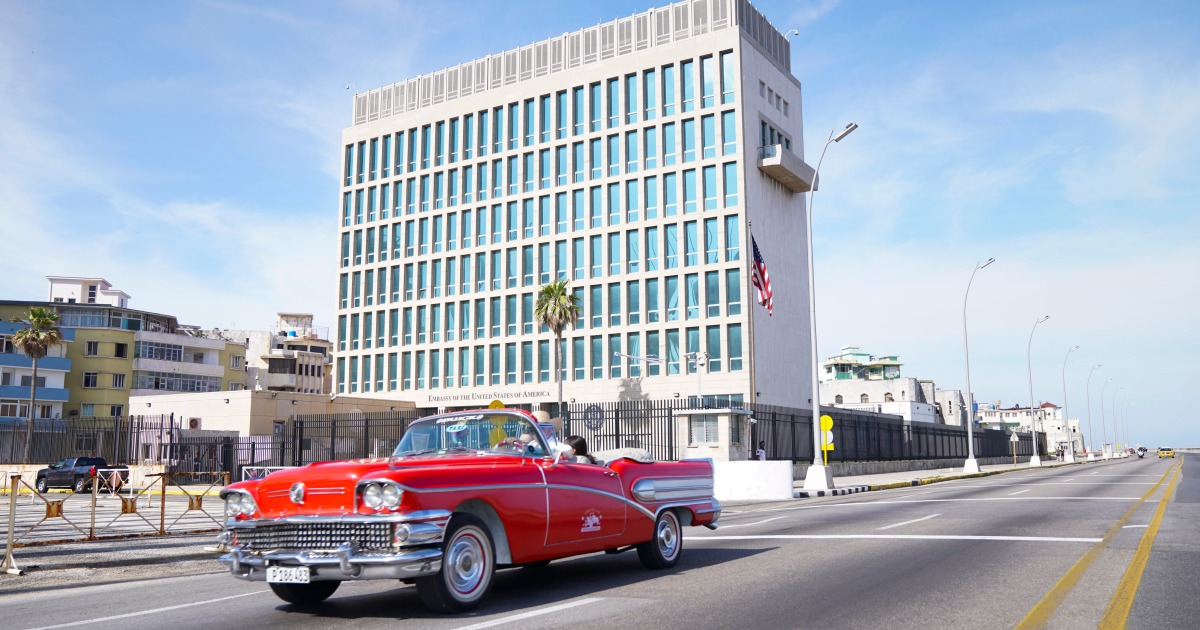 The incoming administration of US President-elect Joe Biden is planning to reset the relationship between the United States and Cuba, but Trump’s move days before he leaves office will make that harder.

Cuba had originally been put on the United States’ ‘state sponsors of terrorism’ list in 1982, but was removed by President Barack Obama in 2015 as he sought to improve economic and diplomatic relations with the Communist island nation [File: Pablo Martinez Monsivais/AP Photo]

The Trump administration will place Cuba back on the list of state sponsors of terrorism on Monday, according to two senior State Department officials, reversing an Obama-era decision and making it harder for President-elect Joe Biden to quickly revive diplomatic ties with Havana.

Secretary of State Michael Pompeo is expected to indicate he’s designating Cuba because the country continues to harbor American fugitives including Joanne Chesimard, convicted of killing a New Jersey state trooper in 1973, and refuses a Colombian extradition request for National Liberation Army members linked to a 2019 bombing that killed 22.

Cuba joins only Syria, Iran and North Korea — nations more widely condemned for fomenting terrorism — on the U.S. list. Cuba had originally been put on the list in 1982 but was removed by President Barack Obama in 2015 as he sought to improve economic and diplomatic relations with the Caribbean nation.

Biden has indicated he wants to revive the Obama-era policy of easing economic and travel restrictions in hopes that closer ties and more capitalism will pave the way for democratic change in Cuba. That strategy could include reducing restrictions on travel, investment and remittances for the island nation that are perceived to disproportionately hurt Americans and ordinary Cubans.

Under President Donald Trump, the U.S. labeled Cuba part of a “Troika of Tyranny” with Nicaragua and Venezuela. His moves were popular with Cuban-Americans in Florida, a state Trump won in his re-election bid with the help of Cuban-American refugees, Venezuelan-Americans and other anti-Communist Latino voters.

His administration had been mulling the terrorism-sponsor move for months. Two senior State Department officials, who asked not to be identified discussing internal deliberations, said politics played no role in the decision to re-designate Cuba and said several administrations — including Obama’s — had made policy decisions about the island late in their presidencies.

The officials said the process of getting Cuba back on the list was a lengthy one and if the U.S. had wanted to play politics, it would have re-designated Cuba before the November presidential election, not after.

The administration had signaled as far back as May that it might restore the designation on Cuba. That was when officials announced Cuba was back on a separate list of nations not cooperating fully with U.S. counterterrorism efforts over its refusal to extradite the National Liberation Army members.

According to the State Department, state sponsors of terror are countries that have “repeatedly provided support for acts of international terrorism.” One of the officials said there is legal precedent dating back to the presidency of George H. W. Bush for keeping a country on the list for harboring terrorists even if it isn’t actively supporting terrorist acts.

Cuba and the U.S., enemies after the late Fidel Castro took power in 1959, established diplomatic relations in 2015 when Obama was president and Biden was vice president. The U.S. eased a five-decade trade embargo and took other steps toward normalization, although a complete end to U.S. restrictions would require an act of Congress.

Despite nascent openings and increasing foreign investment since the 1990s, Cuba’s economy remains heavily controlled by the government and the military.

During Trump’s term, he opened the door for lawsuits against companies benefiting from property confiscated by the government in Cuba, prohibited educational trips and cruises there and limited direct flights. Biden could move to take Cuba off the terrorist list, but a formal review could delay the process by several months and rekindle debate about Cuba’s Communist leaders.