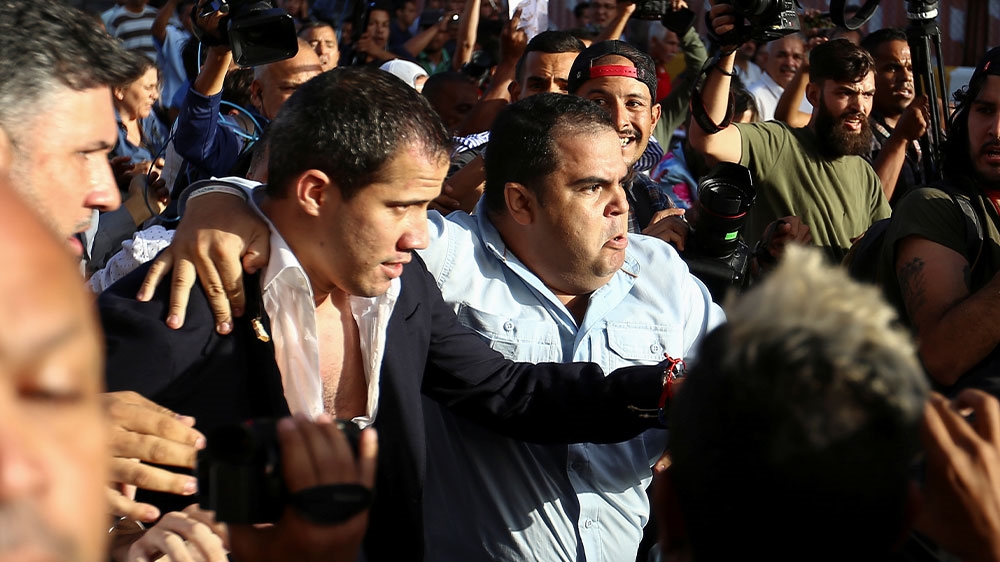 Venezuelan opposition leader Juan Guaido appeared to have breezed through security at an airport near Caracas on Tuesday, returning home without incident from a risky international tour that included a White House meeting with United States President Donald Trump.

He entered Venezuela via the country’s main airport, Maiquetia.

Guaido, who is recognised as Venezuela’s interim president by more than 50 countries, was received at the White House in the US and feted at the World Economic Forum in Davos, Switzerland after slipping out of the country in January in defiance of a travel ban by the government of President Nicolas Maduro.

US President Donald Trump raising his thumb during his meeting with Venezuela’s opposition leader Juan Guaido at the White House in Washington, DC [Kevin Lamarque/Reuters]

Outside the airport on Tuesday, less friendly crowds awaited him.

“Dirty traitor!” and “Get out!” they shouted as an SUV whisked him away. Guaido backers shouted his name in support: “Guaido! Guaido!”

“I’m bringing with me the commitment of the free world willing to help us recover democracy and Freedom,” Guaido said on Twitter. “We begin a new moment.”

He now faces an opposition movement that has struggled to maintain the frenetic street protests of 2019 and has been unable to end Maduro’s grip on power.

Maduro calls Guaido a puppet of Washington, which has implemented a broad sanctions programme against Maduro’s government in an effort to force him from power.

Guaido is urging Venezuelans to remain unified and to take to the streets again, demonstrating their will to end the socialist government that the opposition leaders calls a “dictatorship”.

Opposition lawmakers who met him at the airport said they were heading to a public square in Caracas.