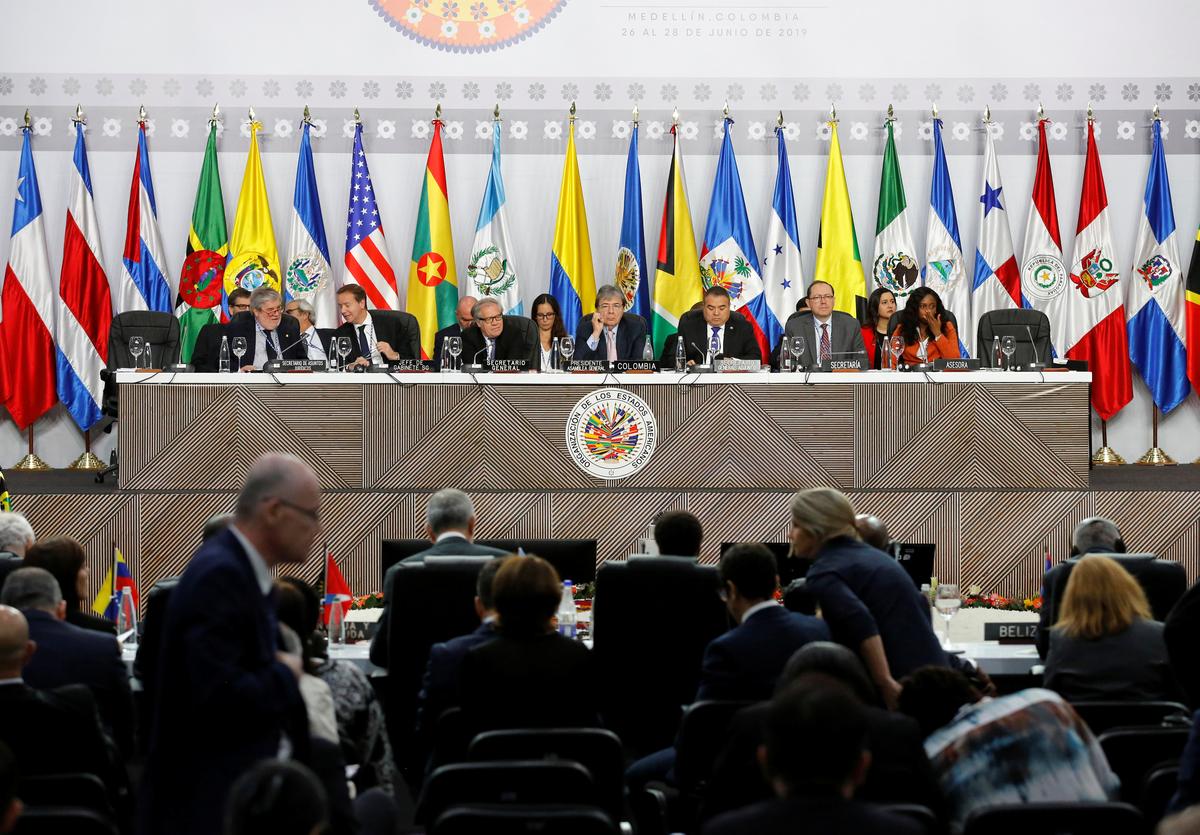 MEDELLIN, Colombia (Reuters) – Members of the Organization of American States (OAS) ended two days of meetings on Friday without a clear plan for increasing pressure on embattled Venezuelan President Nicolas Maduro, despite a majority vote to recognize a representative from the country’s opposition.

The oil-rich country’s economic and political crisis has dominated recent OAS meetings, with some member states denouncing Maduro as a dictator and others continuing to back him.

OAS Secretary General Luis Almagro had said the group would seek to ramp up pressure on Maduro during this week’s session in Medellin, Colombia and even debate eventual sanctions.

But the member states were divided by the presence of a representative sent by Veneuzela’s opposition leader Juan Guaido, who argued that Maduro’s 2018 re-election was illegitimate. In January, Guaido invoked the constitution to assume an interim presidency.

Uruguay withdrew from the assembly on Thursday in protest. The OAS permanent council approved the delegation in April but member states did not vote on it until Friday when 20 countries including Argentina, Brazil, Canada, Colombia, Chile, Ecuador, the United States and Peru backed recognition until Venezuela holds its next elections.

Eight countries voted against recognizing the delegation, while six abstained. Bolivia, Mexico and Nicaragua have expressed dismay at the opposition’s presence.

“Colombia voted with enthusiasm for this declaration,” said Colombian foreign minister Carlos Holmes Trujillo. “The only objective that we all seek is for our Venezuelan brothers to finally be able to vote freely for the government they want.”

The leader of the opposition delegation said the Venezuelan people need a voice at the OAS.

“Our delegation is grateful for this support of our people,” Julio Borges said during the meeting. “We can only tackle the Venezuelan tragedy in one way – giving a voice to the Venezuelan people.”

Guaido tweeted that the vote was a great victory for the cause of Venezuelan democracy.

Maduro announced Venezuela’s withdrawal from the OAS in 2017 and has accused the Washington-based group of being a U.S. pawn.

Venezuela, home to the world’s largest oil reserves, has been in political limbo as shortages of food and medicine have led millions to flee.

The number of Venezuelan migrants abroad could double by the end of next year to 8 million, the OAS said in a report on Friday.

The assembly also approved a resolution supporting a peaceful solution to Nicaragua’s political crisis, which has rolled on for more than a year amid protests against President Daniel Ortega.