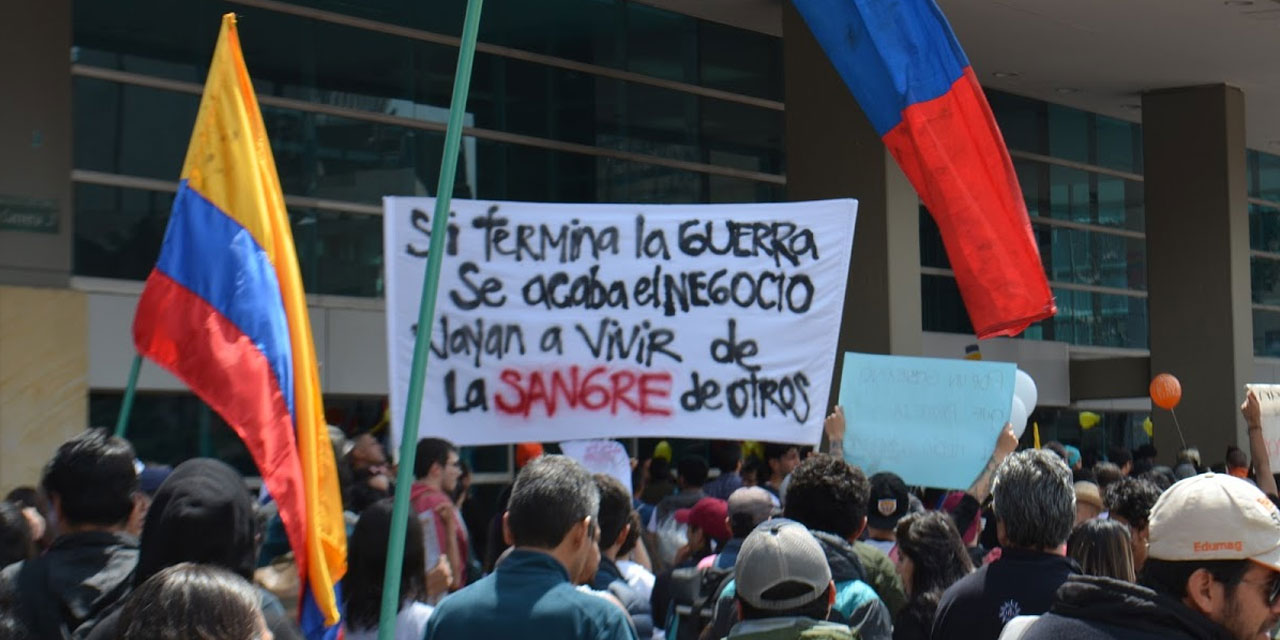 Colombia’s government appears to have been using a military counterinsurgency strategy in response to ongoing protest. This is misguided and dangerous, not just for citizens, but for the country’s democracy.

The strike organizers from the beginning have never expressed a wish to overthrow the government, they want to be heard about their problems and want President Ivan Duque to stop acting like a tin-pot dictator.

The government’s misguided response to the popular rejection of Duque, I believe, is largely due to his far-right advisers and their ignorance of how a democratic state works.

The protests are a forewarned consequence of his government’s consistent refusal to acknowledge it is merely a temporary representative of the executive branch of the State, not the State itself.

Consequently, the president and his ministers have failed to hold meaningful dialogue with civil society, execute policies through consensus politics, and acknowledge its commitments made by previous administrations.

Instead, the Duque administration has been trying to force legislation of the far-right Democratic Center party through congress without majority support, in some cases in violation of the constitution and international agreements, or allegedly through the use of fraud.

In regards to the protests, Duque was reportedly made to believe that the national strike was an attempt to overthrow him.

Consequently, the president’s response obeyed to a military defense strategy instead of a political one.

This authoritarian corruption of Duque’s understanding of democracy and legitimate opposition is dangerous and has been eroding the legitimacy of the government since day one.

Most recently, it has fueled calls for Duque to resign, calls I do not support as the president was elected legitimately and should finish the job he was elected to do. He just needs to sack a few inept authoritarians and negotiate a compromise.

So far, Duque’s refusal to adhere to the basic principles of democracy, recent violations of the constitution in response to the protests and his persistent refusal to talk have done tremendous damage to the president and democracy.

Duque’s persistent stigmatization of the protesters, who according to a poll enjoyed the support of 70% of the population immediately ahead of the national strike, is making his position increasingly impossible.

For the sake of Duque, maintaining democratic normalcy and civil society, the president must wake up and understand that protesters are not insurgents and may constitutionally not be treated as such.

Those who are peacefully exercising their democratic right to protest are not seeking to overthrow his government, but I believe they will and can if the government tries to instill an authoritarian regime like in Venezuela.

Hopefully, the impending talks with experienced politicians and convinced democrats like Bogota Mayor-elect Claudia Lopez can explain the president how democracies work and that he is being misinformed by his staff.

Duque must understand that his party represents approximately 20% of the Colombian population. Any president of any Republic must have the support of at least 50% of Congress in order to legitimately execute policies.

In his first year, Duque was able to pass only six bills through congress, of which at least one was deemed unconstitutional. The response to this ineffectiveness is not pushing harder, but negotiating a congressional majority with the parties the president deems convenient.

Also in regards to the protests, the response is not pushing harder, but dialogue, as has been pointed out by the protesters themselves, the Inspector General, the European Union and members of Congress from left to right.

Fortunately, this message has come through and talks begin later today.

Weekly Semana was kind enough to call Duque’s disastrous first year in office “a year of learning,” but it seems that the president hasn’t learned. He has continued to try to push through policies that do not enjoy majority support.

An escalation of the ongoing protests is dangerous and unnecessary. They can be ended simply by the talks announced by the president.

For all I know, all of the leaders of the national strike are pragmatists who understand that not all of their demands can be fulfilled, none of them have expressed any interest in overthrowing the government.

Hopefully, the strike leaders can teach the president this pragmatism and convince him he misguidedly believes that those defending democracy are insurgents.

Those in the street are defending the state with the approval of a congressional majority and the courts. All recognize the mandate given to him when he was elected president.

The common demand — both on the streets and in Congress — to stop pushing the political agenda of a shrinking minority at the expense of the public is not on the table; it would be abandoning democracy for the benefit of a tin-pot dictator.

The sooner Duque embraces this common understanding of democracy and begins sacking the idiots that surround him, the sooner he can go back to governing the country as he was elected to do.