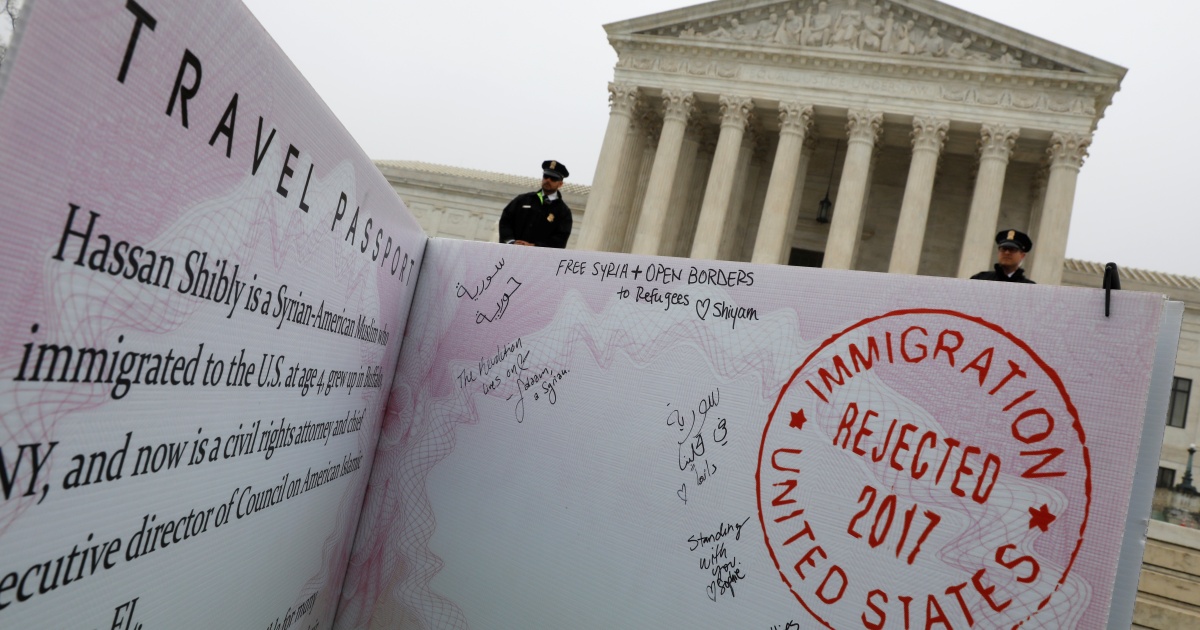 A mock-up of banned Muslim travellers’ passport is placed outside the US Supreme Court, while it weighs the legality of President Donald Trump’s travel ban targeting people from Muslim-majority countries in Washington, DC, US [File: Yuri Gripas/Reuters]

The outgoing administration of US President Donald Trump issued a new temporary rule that could require tourist and business travellers from two dozen countries – most in Africa – to pay a bond of as much as $15,000 to visit the United States.

The US State Department on Monday said the temporary final rule, which takes effect December 24 and runs through June 24, targets countries whose nationals have higher rates of overstaying B-2 visas for tourists and B-1 visas for business travellers.

The Trump administration said the six-month pilot programme aims to test the feasibility of collecting such bonds and will serve as a diplomatic deterrence to overstaying the visas.

“The Pilot Program is designed to apply to nationals of specified countries with high overstay rates to serve as a diplomatic tool to encourage foreign governments to take all appropriate actions to ensure their nationals timely depart the United States after making temporary visits,” according to the State Department document.

A protester holds a sign outside the US Supreme Court, while the court justices consider the legality of President Donald Trump’s latest travel ban targeting people from Muslim-majority countries, in Washington, DC, US [File: Yuri Gripas/Reuters]Trump, who lost a re-election bid earlier this month, made restricting immigration a focus of his four-year term in office. President-elect Joe Biden, a Democrat, has pledged to reverse many of the Republican president’s immigration policies, but untangling hundreds of changes could take months or years.

Biden’s transition team did not immediately respond to a Reuters request for comment related to the visa bond requirement.

But in earlier comments, Biden has said that “on day one” he would revoke Trump’s travel restrictions – often known as the “Muslim Ban” – which affects nationals from Iran, Libya, Somalia, Syria, Yemen, as well as citizens from Venezuela, North Korea, Nigeria, Sudan and Myanmar.

Mock-ups of banned Muslim travellers’ passports are placed outside the US Supreme Court during a protest in Washington, DC, US [File: Yuri Gripas/Reuters]Trump signed the travel ban by way of executive order in 2017, in a move that drew widespread outrage from activists and rights groups who accused the Trump administration of discrimination and racism.

This latest visa bond rule will allow US consular officers to require tourist and business travellers from countries whose nationals had an “overstay rate” of 10 percent or higher in 2019 to pay a refundable bond of $5,000, $10,000 or $15,000.

Twenty-four countries meet that criterion, including 15 African countries. While those nations had higher rates of overstays, they sent relatively few travellers to the US.

Historically, US consular officers have been discouraged from requiring travellers to the US to post a bond, with State Department guidance saying processing of the bonds would be “cumbersome”, the temporary rule said.

According to the document, countries whose tourist and business travellers could be subject to the bond requirement include those from Afghanistan, Iran, Syria, Yemen, Libya, Mauritania, Eritrea and Sudan. Other countries include Angola, Bhutan, Burkina Faso, Burundi, Cabo Verde, Chad, Democratic Republic of the Congo, Djibouti, as well as Gambia, Guinea-Bissau, Laos, Liberia, Myanmar (Burma), Papua New Guinea, and Sao Tome and Principe.