Posted By: Jihan Abdalla 10 months ago 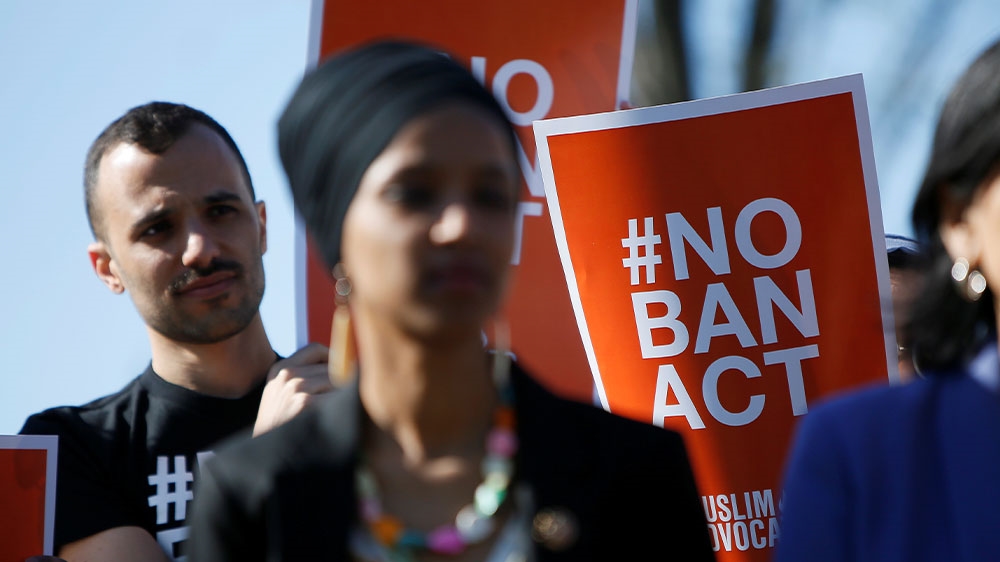 Representative Ilhan Omar stands in front of ‘NO BAN ACT’ posters during a news conference by members of the US Congress [File: Jim Bourg/Reuters]

Washington, DC – On the third anniversary of the announcement of United States President Donald Trump’s Muslim ban, Democrats said on Monday that the House of Representatives will soon consider legislation that would repeal the travel ban and limit the president from imposing future restrictions based on religion.

House Speaker Nancy Pelosi said the House will consider the “NO BAN Act” which would overturn the ban and prevent the president from establishing future restrictions unless the administration provides strong evidence to justify it in consultation with Congress.

“House Democrats continue to stand opposed to President Trump’s cruel, un-American travel ban in all of its iterations. In the coming weeks, the House Judiciary Committee will mark up and bring to the floor the NO BAN Act to prohibit religious discrimination in our immigration system and limit the president’s ability to impose such biased and bigoted restrictions,” Pelosi said in a statement.

House Judiciary Committee Chairman Jerrold Nadler said on Monday that his panel would take up the bill in two weeks. The bill was introduced in April, and is supported by nearly 250 members of Congress and hundreds of civil rights, faith, national security and community organisations from across the country.

Three years after the Trump Admin launched its outrageous Muslim travel ban, reports indicate the Admin is preparing to expand this dangerous policy. Democrats will continue to stand up against Trump’s efforts to dishonor our proud immigrant heritage. https://t.co/7CHCB6CHb0

The bill has a chance of passing in the Democratic-led House, but faces an uphill battle in the Republican-controlled Senate.

In a news conference held outside the US Senate, Democratic Senator Chris Coons, one of the authors of the NO BAN Act denounced what he called the “intentional use of cruelty” in the Trump’s administration’s immigration policy and said the Muslim ban was based on “prejudice, populism and discrimination”, rather than fact or security considerations.

“Our whole effort in introducing this legislation and trying to move it forward is to say our Supreme Court got it wrong,” Coons told reporters.

Trump’s first travel ban, which targeted several Muslim-majority countries, was announced without warning on January 27, 2017, days after the president took office. It created outrage and led to chaos in airports across the country as hundreds of travellers were detained and thousands of previously issued visas to the US were revoked.

After lower court rulings invalidated the first two iterations, the Supreme Court on June 2018 upheld the third version of the ban which applied to citizens of five majority-Muslim nations – Iran, Libya, Somalia, Syria and Yemen – and put restrictions on some travellers from Venezuela and North Korea.

The current ban suspends immigrant and non-immigrant visas to applicants from the affected countries, but it allows exceptions, including for students and those who have established “significant contacts” in the US.

The move comes days after Trump confirmed he was planning on expanding the ban. Although he did not say which countries will be added, US media reported the expanded ban may include Belarus, Myanmar, Eritrea, Kyrgyzstan, Nigeria, Sudan and Tanzania.

Any expansion to the ban is expected to draw more legal challenges by rights groups who say the travel restrictions unfairly target Muslims, has separated families and prevented people from accessing vital education and healthcare in the US.

“Trump doesn’t just want a border wall, he’s creating an invisible wall keeping out people around the world based solely on their religion,” Congresswoman Ilhan Omar at Monday’s news conference. “That is why we will keep fighting until we finally are able to repeal this Muslim ban and put this hateful policy in the waste pin of history where it belongs.”

I still believe in an America that protects the free exercise of all religions.

I still believe that Congress shall make no law establishing a religion.

Three years after the #MuslimBan, I will continue to fight for that America. #NoBanAct

Trump campaigned in 2016 on a promise to ban Muslim immigrants and refugees from entering the country.

He has made cracking down on immigration the focus of his presidency and it is a core topic for his reelection drive before the November 3 vote. He has pushed for the building of a border wall along the US’s southern border to prevent migrants and asylum seekers from entering through Mexico.