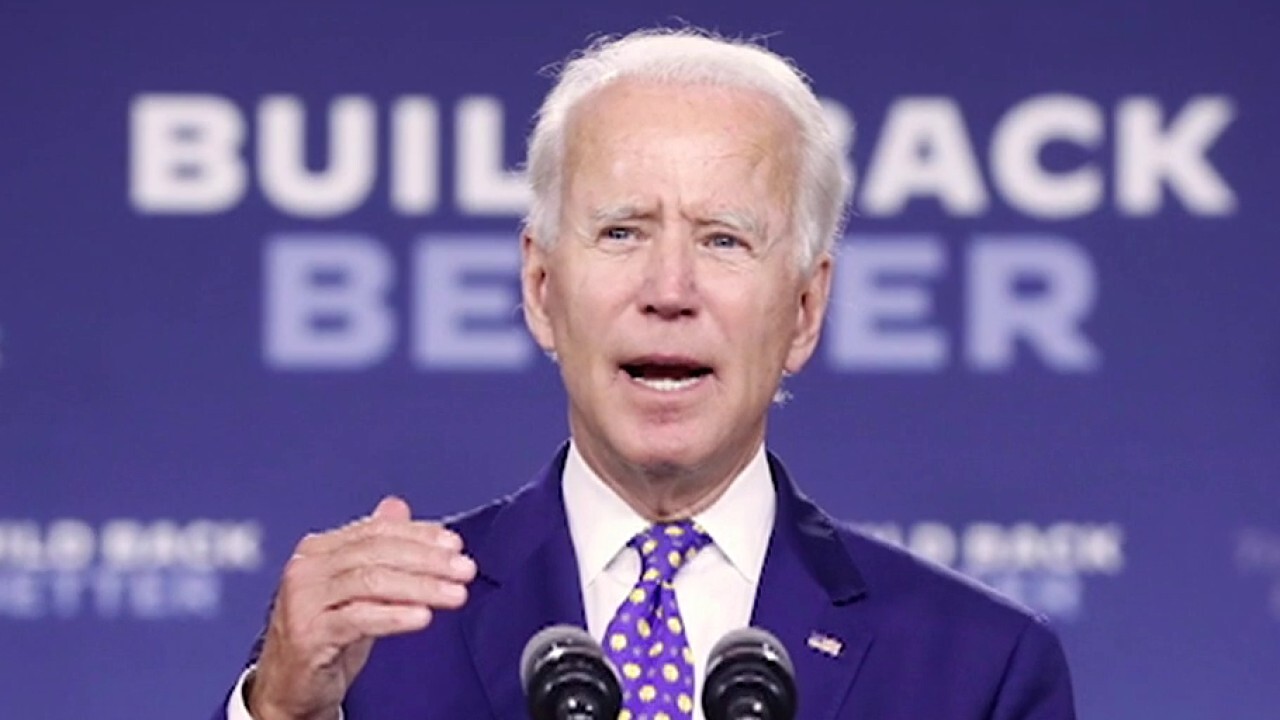 Democratic presidential nominee Joe Biden continues to give ambiguous answers on whether he supports his fellow Democrats’ extreme calls for packing the Supreme Court, saying this past week that he would decide based on whether or not Judge Amy Coney Barrett is confirmed by the Senate.

The former vice president’s answers on the issue are growing more pathetic by the day.

During the first presidential debate, Biden said whatever position he takes on court-packing “will become the issue.”

Recently, at a campaign event in Phoenix, Biden said “you’ll know my opinion on court-packing when the election is over.”

DAVID BOSSIE: BIDEN WANTS TO PACK SUPREME COURT TO PUT AMERICA ON ROAD TO SOCIALISM — HE JUST WON’T ADMIT IT

A day later in Las Vegas, Biden stated voters do not deserve to know if he will attempt to pack the Supreme Court if he becomes president.

The Supreme Court is on the minds of American voters right now – Biden must give a straight answer. His position on a matter that is consequential to the American people deserves an answer.

For someone who claims to be campaigning on restoring the soul of our nation, it shouldn’t be difficult to reject a court-packing plan that would destroy America’s judicial independence.

If you think that’s farfetched, just look at another country that packed their Supreme Court – socialist Venezuela.

In 2004, Hugo Chávez and his socialist allies expanded the Venezuela Supreme Court size by more than half. Chávez packing the court with loyalists who helped advance his socialist agenda and destroyed the once great country.

In America, we cannot afford to allow a socialist agenda to transform our treasured institutions.

DEROY MURDOCK: TRUMP VS. BIDEN – VOTERS IN 2020 SHOULD THINK LONG AND HARD ABOUT POLICY, NOT PERSONALITY

Democrats want to consolidate as much power as possible and massively expand the size of government’s role in our lives.

Clearly, Democrats are demonstrating utter contempt for our Founding Fathers’ original goal – the creation of a republic that limits government and embraces individual freedom.

The Democrats are currently busy trying to find a way to derail the nomination of Judge Amy Coney Barrett to the United States Supreme Court. Judge Barrett is the perfect choice to replace the late Justice Ruth Bader Ginsburg, a legal titan.

The future justice is a historic nominee with a stellar academic record, sterling legal credentials, and unwavering love for the United States and U.S. Constitution.

The American people should find comfort in the fact that Judge Barrett is exceptionally qualified and will faithfully adhere to the foundational judicial principle of enforcing the Constitution as written.

I am confident that by the month’s end, the Senate will vote to confirm Judge Amy Coney Barrett as the ninth Justice on the Supreme Court based on her impeccable record.

Unfortunately for our country, Democrats can’t accept the inevitable reality ahead. They are openly calling to pack the Supreme Court as retribution for Judge Barrett’s nomination and eventual confirmation.

Democrats want to expand the number of justices on the Supreme Court in an effort to fundamentally transform America without a single vote of Congress. Their court-packing plan is the fastest way to delegitimize our Judicial branch – the only non-political branch of the American government. It was for this reason that Justice Ginsburg herself strongly urged against packing the Supreme Court.

In an interview with NPR in 2019, Justice Ginsburg made the following blunt comments on Democrats’ calls to pack the Supreme Court, “If anything would make the court look partisan,” Justice Ginsburg said, “It would be that – one side saying, ‘When we’re in power, we’re going to enlarge the number of judges, so we would have more people who would vote the way we want them to.'”

Democrats don’t care about that dangerous consequence – all they care about is ensuring their radical socialist agenda is greenlit by the highest court in the land.

Democrats can’t win by playing by the rules, so they want to change the rules and tear down American institutions in the process. You would think that as the face of the Democrat Party, Biden would reveal his opinion on his party’s new radical position, yet he continuously refuses to share it with the American people.

It is not an exaggeration to say our democracy is on the ballot November 3.

If Democrats take power, they will prove that they will stop short of nothing to advance their radical socialist agenda. Packing the court is just the first step in the process. We must come together and reject their dangerous ideology for the sake of our country and our children’s future.

A vote for President Trump is a vote to save American freedom.

Mercedes Schlapp is a Senior Advisor to Donald J. Trump for President Inc. and was formerly the White House Director of Strategic Communications in the Trump administration.