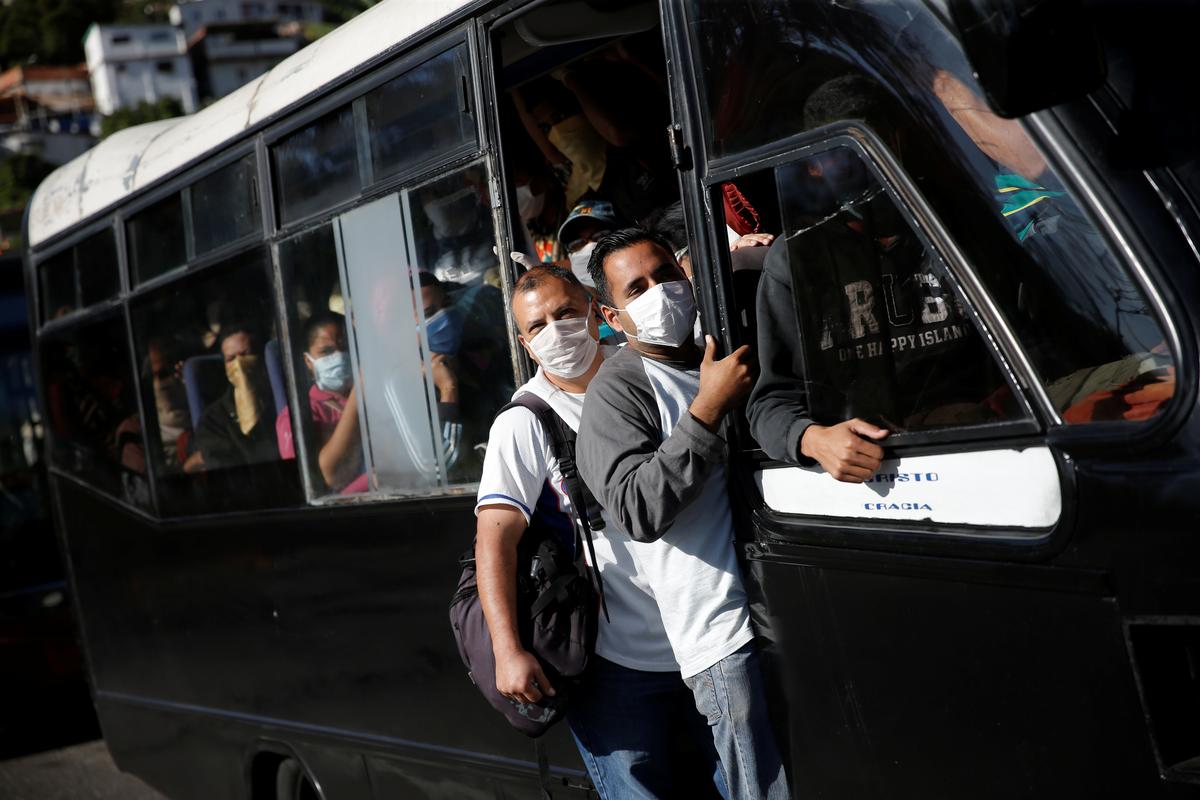 CARACAS (Reuters) – Caracas woke on Monday to quiet streets and military checkpoints on the first day of a quarantine ordered by President Nicolas Maduro to combat the coronavirus, while many of the Venezuelan capital’s residents who did go out wore masks, often improvised.

A crowded bus with people using protective masks passes through a checkpoint after the start of quarantine in response to the spreading of coronavirus disease (COVID-19) in Caracas, Venezuela, March 16, 2020. REUTERS/Manaure Quintero

Venezuela has confirmed 17 cases of the virus and no deaths, but the decay of its public health system after years of economic collapse has raised alarm about whether Maduro’s government is in a position to control its spread.

Many Venezuelans say they fear contracting the virus as they know there are few healthcare resources to treat them if they need treatment. Maduro’s government is encouraging all Venezuelans to buy masks, or fashion their own, for protection.

But Jose Luis Nieves, a 32-year-old foraging for food in a rubbish dump by Caracas’ Plaza Venezuela, said he could not afford to stay indoors. He said he earns the equivalent of $2 a month recycling cardboard and plastic he finds in the street.

“If we don’t work, we don’t eat,” he said, a dirty white mask hanging from his neck. “Otherwise my kids are going to die of hunger. We have to head out like always.”

Authorities on Monday set up military checkpoints on the main roads entering Caracas and were turning away some drivers, according to Reuters witnesses.

Intelligence officials were also guarding entrances to some supermarkets in the city to ensure all customers were wearing masks.

On Sunday, Maduro ordered businesses to close and citizens to remain in their homes in a “social quarantine” affecting Caracas and six other states, with exceptions for transport, health and food delivery services.

Hospitals in Venezuela have lost huge numbers of medical professionals and are so dilapidated that, in some cases, staff use paint buckets as improvised toilets and reuse surgical gloves.

Medical professionals express concern that the health system will be quickly overwhelmed.

Maria Arocha, a 78-year-old sat in a plaza in Caracas’ upmarket Chacao district, said she had spent the past three days with flu symptoms and a sore throat, and was trying to get evaluated, but there was no doctor at the first clinic she visited.

“I don’t think it’s coronavirus,” she said, while praising the quarantine to limit its spread.