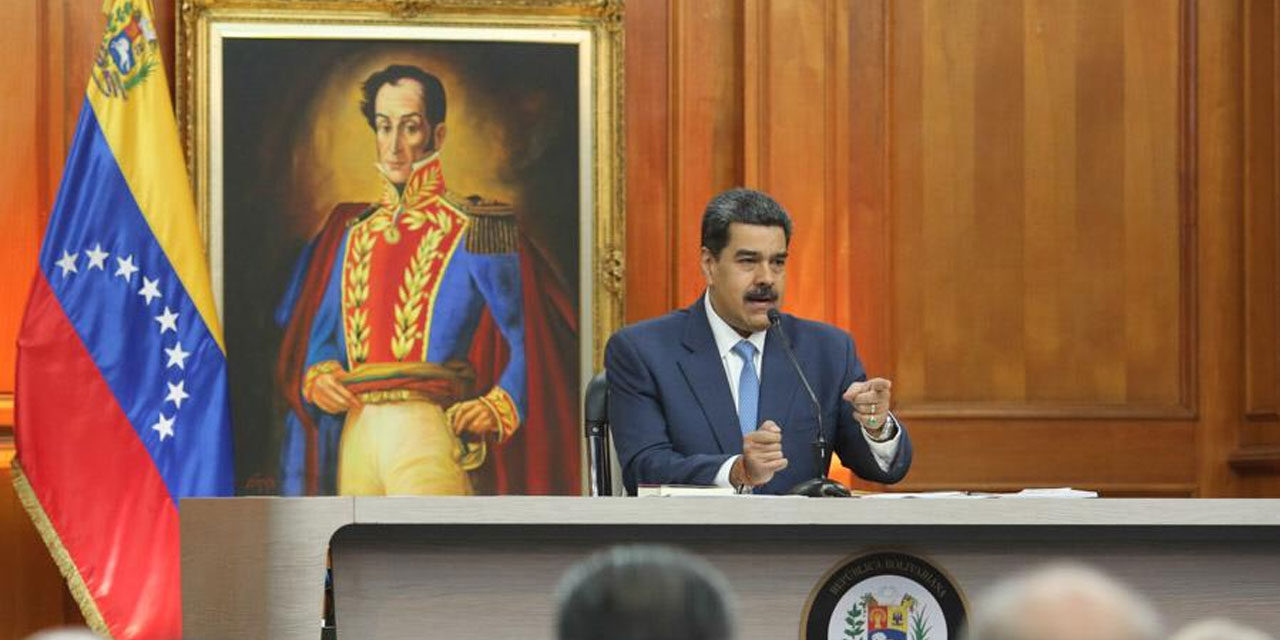 Venezuelan President Nicolas Maduro reiterated his call on his counterpart from Colombia, Ivan Duque, to reestablish consular relations on Friday “before its too late.”

In his first international press conference, Maduro repeated baseless accusations that Duque would training terrorist groups against the neighboring country and warned to “respect Venezuela” before “it’s too late.”

In Colombia, terrorist groups, mercenaries, traitors and deserters are being trained with the purpose of bringing a war to Venezuela. We are prepared to confront these terrorist groups… Duque is behind all this, unfortunately.

Venezuela’s authoritarian leader called the press conference to talk about charges his foreign minister filed before the International Criminal Court against the United States, a long-time ally of Colombia’s governments.

While Maduro accused his American counterpart Donald Trump of waging an “economic and humanitarian war” against Venezuela through sanctions “that have cost thousands of lives.”

In the case of Trump, Venezuela’s president reiterated he was open to talks.

In Duque’s case, Maduro reiterated his offer to reestablish diplomatic ties he broke off after Colombia’president actively supported Venezuelan opposition leader Juan Guaido in a US-sponsored operation to force aid trucks over the border.

I ratify my proposal to all of Colombia to regularize and re-establish policies and a diplomacy of communication, respect and understanding within the framework of the ideological-political differences that we have.

“Let’s rectify this before it’s too late,” said Maduro, adding that “above all, I ask that the internal political life of Venezuela be respected.”

While stressing that “we want peace, understanding, dialogue,” Venezuela’s leader said to be prepared for the worst.

There has to be a thorough rectification of the political class, of the ruling class of power in Bogota in time. Later will be too late and we will not be stopped by anyone… We are able to pass the highest mountains and peaks, and arrive over roads that you might least expect.

Because Maduro also expects military action from army officials exiled in Brazil, Venezuela’s president said that more than 2.3 million soldiers and militia members would take part in a military exercise over the weekend.

We will mobilize 2,370,430 fighters of the armed forces and the national Bolivarian militia in the 2020 Bolivarian Shield exercise to defend the entire national territory.

The military exercise in the second since September last year in a repeated show of military force amid the ongoing political tensions between Venezuela and its two neighbors.

During the exercises in September, Colombia’s military on the border went on its highest state of alert.

This time, the military is already on its highest state of alert as the military exercises coincide with an “armed strike” of the ELN guerrilla group that on Friday alone left at least six policeman in Cesar, a northern province on the Venezuelan border.

The last-minute announcement of the military exercise put extra pressure on Duque who has refused to reestablish diplomatic relations and has been among the most outspoken in his refusal to recognize Maduro’s presidency.

Dozens of countries in the Americas and Europe refused to recognize the results of last year presidential election, but Colombia is among the few to be expelled from the country.

While few in Colombia recognize Maduro’s reelection, a growing number of voices from the left to the center-right support reestablishing diplomatic ties to prevent escalation of the tensions.