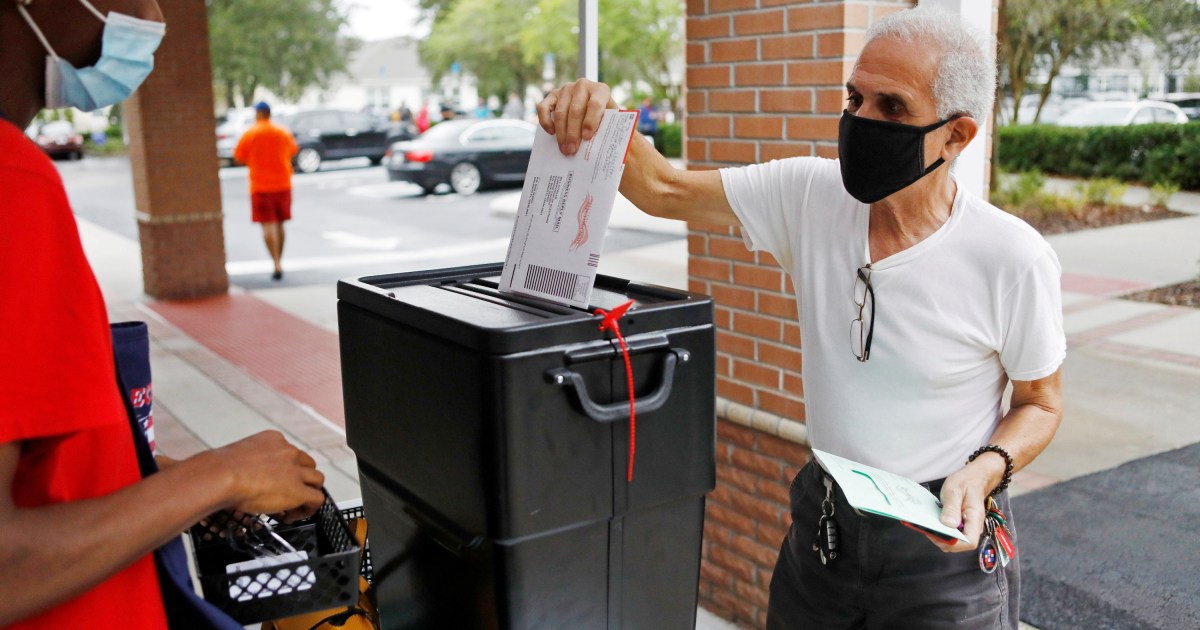 Latino voters in important swing states like Florida are being hit with a wave of Spanish-language misinformation ahead of the November 3 United States elections, in which their votes could play a key role in the outcome.

Ranging from unproven voter fraud allegations to “Deep State” plots against President Donald Trump, Florida Latinos are facing a “major spike” in exposure to conspiracy theories related to the election and its candidates across social media, messaging apps, the radio and YouTube, according to local reports.

In Florida, the Spanish-language misinformation has largely targeted Democrats and progressive causes. One conspiracy theory, which claims that Democratic presidential candidate and former Vice President Joe Biden has a “problem” with paedophilia, has been amplified by a Venezuela-focused news website and also by a Puerto-Rican born pastor on Facebook, according to Politico.

Other misinformation includes comparisons between Black Lives Matter protesters and Nazis, as referenced in an advertisement in Miami’s local Spanish-language newspaper, El Nuevo Herald, and accusations by radio guests that absentee voting is “throwing your ballot into a tomb”.

El Nuevo Herald’s editor has since apologised for running the advertisement.

While it is hard to measure the potential impact of such misinformation, a 2019 Pew Research Center study found 43 percent of residents in “higher-share Hispanic areas” view local media as “influential”.

Beyond traditional media, social media like Facebook, YouTube and encrypted messaging service WhatsApp – which Facebook owns and which is popular among the Spanish-speaking population in Florida – are also rife with conspiracy theories, according to reports.

While it is difficult to quantify how many views are received by posts and messages on Facebook or WhatsApp, Spanish-language YouTube videos discussing Biden’s “sexual record” have hundreds of thousands of views.

“Our community is digesting misinformation at an alarming rate”, Eduardo Gamarra, a professor of politics at Florida International University in Miami who tracks voting attitudes, told ABC News.

“There’s a significant amount of activity of broad conspiracy theories that have all the worst of American politics … and they have filtered into Latino households”, Gamarra said.

Much of it appears to be linked to QAnon, a set of intertwining conspiracies that claim Trump was elected to combat a satanic cabal of liberal elites who engage in child sex trafficking, harvesting chemicals from adolescent blood to keep themselves young.

“Misinformation is not new in politics and heavily targets predominantly Spanish-speaking Latinos across the country, like in Florida”, said Eileen Garcia, communications director for Solidarity Strategies, a Latino-owned political consulting firm based in Washington, DC that works to elect progressive candidates.

“We saw in 2016 and are seeing again in 2020 Donald Trump and the Republicans not only attacking Latinos, but actively trying to prevent us from voting through misinformation and ‘voter suppression’ efforts”, she told Al Jazeera.

Republicans deny any efforts to engage in voter suppression and it is difficult to pinpoint the source of many of the conspiracies circulating across social media.

The spread of conspiracy theories like QAnon in the mainstream is on the rise across communities in the US, not just among the Latino population. There are at least 24 candidates running for office in 2020 who have expressed support for QAnon.

But the increase in Spanish-language misinformation targeting Florida comes as Latino voters could play a major role in deciding a crucial election.

The Pew Research Center estimates the 2020 election could be the first in which Latino voters are the largest minority voting group, with 32 million eligible voters.

Most of these voters are spread across three states: California (7.9 million), Texas (5.6 million) and Florida (3.1 million), Pew estimates.

Florida, a critical swing state won by Trump in 2016, is widely viewed as essential to the president’s re-election hopes.

But Trump and Biden are neck and neck in most recent polls. If Biden wins the state, it is hard to envision a path for Trump to attain the necessary number of votes in the Electoral College to claim victory, barring major upsets in other states. With such tight margins in polls, the onslaught of misinformation could potentially help to decide the outcome of the race in Florida.

For its part, Solidarity Strategies is working to combat the misinformation, according to Garcia, in order to “ensure that every Latino has all of the accurate information they need about the candidates and voting methods in order to cast safe and informed votes”.

Garcia concluded by highlighting the fruits of Solidarity Strategies and other organisations that have worked to register Latino voters.

The “results speak for themselves as Latino turnout has more than doubled across all age groups compared to 2016” in early voting, Garcia said, citing data from Catalist, a progressive voter database service.