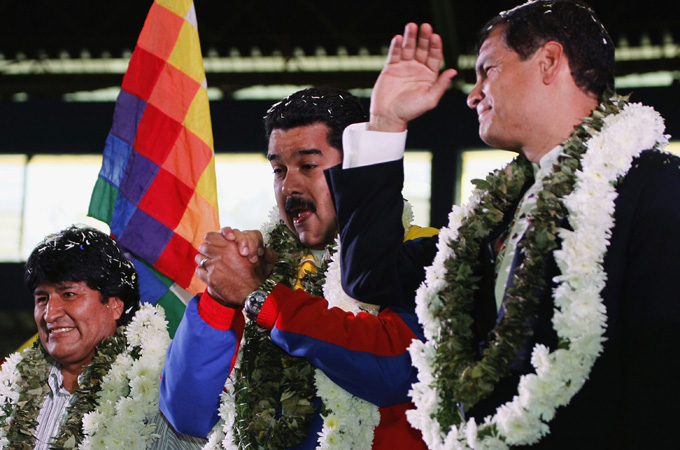 Latin America’s political left has been facing mounting pressure after political defeats in Bolivia, Argentina and Ecuador, demonstrations and parliamentary opposition in Venezuela, the far-right victory in Brazil and flagging enthusiasm for the revolution in Cuba.

This film offers an insight into the new challenges the continent is facing with unprecedented access to political leaders in Latin America including Venezuelan President Nicolas Maduro and former Presidents Dilma Rousseff of Brazil, Jose “Pepe” Mujica of Uruguay, Evo Morales of Bolivia and Rafael Correa of Ecuador.

Marco Enriquez-Ominami, a filmmaker and former presidential candidate in Chile, thoughtfully explores how things have changed since the beginning of the 21st century when Latin America witnessed an extraordinary cycle of economic growth and social development.

This transformation changed the scene radically and led to the building of a democratic culture, respect for the rule of law, economic independence and a redistribution of wealth. The result was a considerable reduction in poverty and the emergence of new political leaders.

But now, this period of political dominance has given way to one of increasing instability.

Nicolas Maduro explains that Venezuela is now experiencing the collapse of what he calls “the oil model” on which his country relied for the past 100 years.

“The fact is, 2015 saw the exhaustion of the oil-rentier model. What did this model mean? A country that was spending $35bn on imports in order to satisfy a very strong domestic market. But in 2016, our foreign currency income fell to an all-time low. This wrought havoc on our economy, already weakened by an internal economic war, with contraband, fraud … it hit a country on its knees,” Maduro explains.

He adds: “Our oil experts failed. I have never said this publicly, our experts, our analysts, our strategists failed. They saw nothing coming. I have documents to prove it.”

From 2016 onwards, the policies of these leaders began to be questioned by the same voters who had originally put them in power. It was the beginning of the end for the left in Latin America.

“The greatest harm ever done to economics was the stripping of its original definition: political economy. Look at why and for whom measures are taken. On close inspections, it is always for capital,” Rafael Correa, Ecuador’s former president and left-wing economist, argues.

Correa lives in self-imposed exile in Belgium after facing charges related to the alleged kidnapping of an opponent in 2012.

“What is the left? The supremacy of humans over capital,” he adds.

The right won the 2015 election in Argentina (though has since lost out to the current centrist regime), Jair Bolsonaro has been elected President of Brazil – and Maduro continues to face the challenge of the opposition-led parliament in Venezuela. Along with the death of Fidel Castro, all are signs of a shift in a continent well acquainted with revolution and counter-revolution.

Add to the mix Donald Trump in the White House, Brexit in the United Kingdom and a Europe struggling with both a crisis in confidence and immigration, the left appears to have no meaningful answers.

So, is Latin America’s shift a swing of the political pendulum or part of a wide global trend?