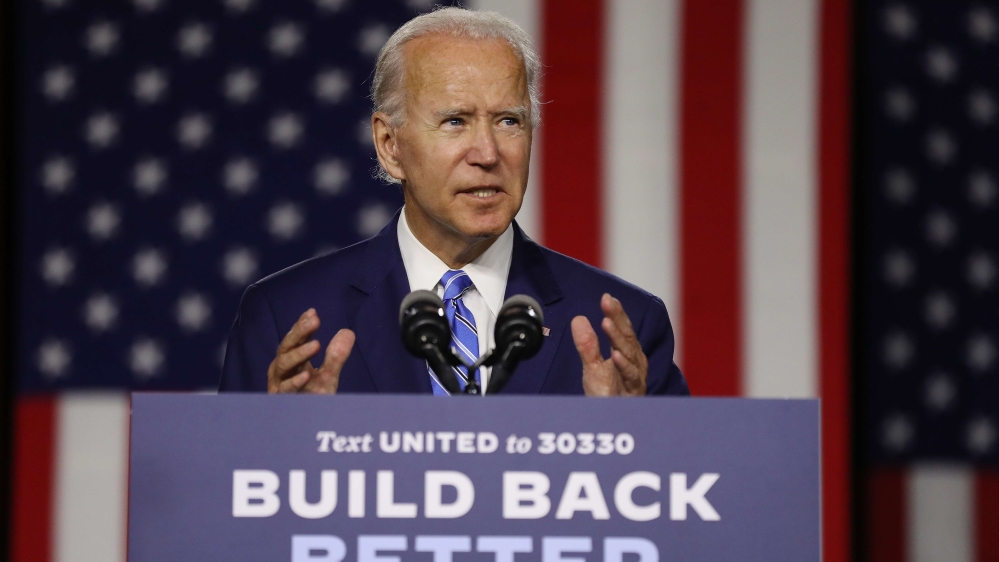 As the presidential election campaigns in the United States draw to a close, amid President Donald Trump’s often belligerent and divisive actions, Joe Biden, the Democratic Party candidate, is being projected as America’s – and the world’s – last hope.

This is hardly surprising, as Trump’s re-election campaign has served up a fantastic constellation of distortions about American “values” that would certainly sit well in Gone With The Wind, the award-winning classic American film that espoused the “splendour” of slavery and white supremacy. Moreover, his brash proclamations about “making America great again” led to unprecedented polarisation and a cacophony of ominous calls for conservative America to stand up to “leftist” forces allegedly bent on destroying the world’s greatest nation.

Attorney General William P Barr has described America’s liberals as intent on “tearing down the system” and “fascistic”. Kay Cole James, a leading conservative who served in George W Bush’s administration, claimed: “Antifa and the BLM organization want to impose an ideology on America that would only bring greater poverty, a loss of freedom, destruction to churches and civil society, and violent law enforcement tactics to enforce compliance – exactly what we’ve seen in places like Venezuela, Cuba and North Korea.”

After convincing his supporters that America needs “saving”, the president took on the role of a dashing white saviour with John Wayne patriotism and Clark Gable flair, and promised Americans that he would continue to protect them from all of their imagined enemies – from anti-fascist protesters and anti-racism activists to immigrants and the “Chinese virus”.

As Trump worked hard to sell himself as the leader America needs to return to its former glory, Biden cast himself as the antithesis of the madman in the White House.

Doing so, to be honest, has not been incredibly hard – all Biden had to do was to promise to repeal the racist, conservative and isolationist policies Trump has established in the last four years, especially in foreign affairs.

The most intriguing statement of intent promoted by Biden lately is a promise to end Trump’s unqualified support for Saudi Arabia. The oil-rich nation has been accused of committing war crimes in Yemen and orchestrating the assassination of Saudi journalist Jamal Khashoggi in Turkey. In a statement released on the second anniversary of Khashoggi’s killing, Biden pledged to “end US support for Saudi Arabia’s war in Yemen, and make sure America does not check its values at the door to sell arms or buy oil.”

He went as far as to claim that under a Biden presidency, “America’s commitment to democratic values and human rights will be a priority, even with our closest security partners. I will defend the right of activists, political dissidents, and journalists around the world to speak their minds freely without fear of persecution and violence.”

This extraordinary, and frankly dubious, commitment chimes well with Biden’s promise to re-establish the position of the US, whose credibility he believes was “tarnished” by the Trump presidency, as a just and trusted global leader. Essentially, Biden wants to bring back Bill Clinton, George W Bush and Barack Obama’s America: an ostensibly strong, righteous and benevolent America that is a force for good across the world.

The America that, he so proudly claims, provided “moral leadership” to the world.

The problem is, such an America just does not exist.

In fact, it never did – not under Clinton, Bush or Obama.

And America has never enjoyed any discernible “credibility”.

Believing Biden when he says he cares about human rights in Saudi Arabia and Yemen would require us to also believe that he understands the plight of the civilian populations carelessly bombed, maimed and killed by American and allied forces in Iraq, Afghanistan and Syria. That he did not agree with John Kerry when he described the Egyptian military’s coup against the country’s democratically elected president as “restoring democracy”. That he has defended the civil rights activists, journalists and protesters detained, harassed and killed by American-backed security forces in Egypt. That his heart has bled for the thousands of Palestinians killed by Israeli security forces in the last 10 years. That he publicly disagreed with Obama when in 2014, as Palestinian civilians in Gaza were being slaughtered by relentless Israeli air attacks, he declared that “Israel has a right to defend itself”.

But he has not. Instead, throughout his decades-long political career, Biden has consistently toed the American line; he supported Israel’s apartheid, Egypt’s assaults on human rights and civil liberties, and Saudi Arabia’s murderous policies.

Worse still, Biden never raised any opposition to the American Service-Members’ Protection Act. Signed into law by Bush in 2002, it is a US federal law that aims “to protect United States military personnel and other elected and appointed officials of the United States government against criminal prosecution by an international criminal court to which the United States is not party.”

It allows the US president to use “all means necessary and appropriate to bring about the release of any US or allied personnel being detained or imprisoned by, on behalf of, or at the request of the International Criminal Court (ICC)”. In June, the Trump administration imposed economic and travel sanctions on ICC workers directly involved in investigating American troops and intelligence officials and those of allied nations, including Israel, for possible war crimes in Afghanistan and elsewhere.

The ICC has been investigating possible war crimes committed by US troops in Afghanistan and Israeli troops in Palestine. Crucially, Biden has not stated a burning desire to revoke this regressive and counterproductive act. He never lobbied the US Congress and Senate to repeal the American Service-Members’ Protection Act when he was vice president, and he has no intention to do so if he is elected president in November. He does not want to stand up for international justice, or the thousands of people unfairly tortured and killed by American and allied troops.

And he does not want America to stop conducting drone attacks – extrajudicial killings that are sold as essential components of a “comprehensive counterterrorism strategy”.

All in all, this supposedly progressive presidential candidate – just like his “America first” rival – wants America and its allies to inflict “greater poverty, a loss of freedom, destruction to churches and civil society, and violent law enforcement tactics to enforce compliance” in third world countries, but avoid being investigated and facing accountability for its endless transgressions of international law. He wants America to continue inflicting violence on the world, but be praised as a moral and just global leader for doing so.

So why is America lost in this shameless spectacle about values, greatness, moral leadership and credibility, when it clearly has none? It is understandable that America’s number one objective in foreign affairs is America’s wellbeing, seemingly at any cost. But why does it pretend to care about being perceived as a  protector of peace and democracy around the world, when it has long sponsored, backed and initiated political insurgencies, military coups and repressive regimes in South America, Africa and the Middle East?

It could go about funding murderous strongmen and destroying lives abroad without seeking moral cover and undue global validation for its violent actions, but it does not. Instead, every four years, without fail, it indulges in an embarrassing song and dance about advancing or restoring America’s leadership on the world stage and, as Biden puts it, leading through the “power of example”. Yet history tells us that neither the Republicans nor Democrats have ever really made the world a safer place. And even now, with Trump in office, the presidential election, whatever the result, will not make America more moral or just.

America, under Biden, will be as dangerous as ever.