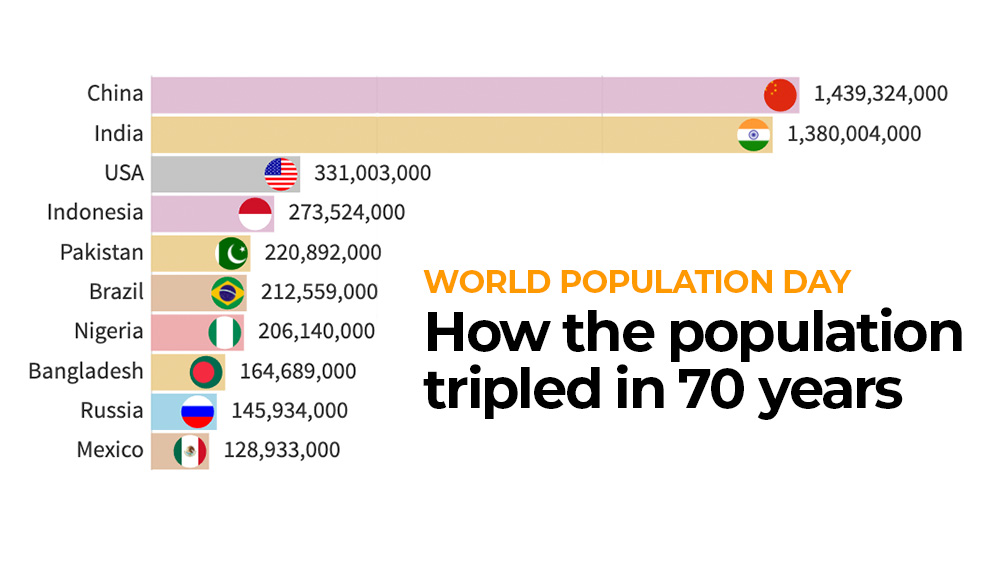 People across the globe observe July 11 as the World Population Day – as designated by the United Nations to raise awareness about reproductive health and achieve sustainable development around the world.

The theme this year is focused on safeguarding the health and rights of women and girls around the world, especially during the ongoing COVID-19 pandemic.

The animation below shows how the world grew from 2.5 billion people in 1950 to 7.7 billion now.

When the world’s population reached each billion milestone:

Which countries are growing the fastest?

The population of India is expected to overtake China by 2024, based on projections made by the UN’s Population Division. India would then become the world’s most populous country comprising one out of every six people on the Earth.

The animation below shows the top 10 fastest-growing countries per decade since the 1950s.

The fastest-growing continent over the past five years was Africa (2.51 percent) and the slowest growing was Europe (0.12 percent). In countries in the Middle East, an influx of foreign workers combined with a higher standard of living led to the sharpest population increases over the decades.

If you are curious, the countries with the maximum decreases in population size over the past five years were: Lithuania (-1.48 percent), Latvia (-1.15 percent), Venezuela (-1.13 percent), Bosnia and Herzegovina (-0.89 percent) and Bulgaria (-0.71 percent).

How has your country’s population grown over the past 70 years? Explore the interactive map below to find out.