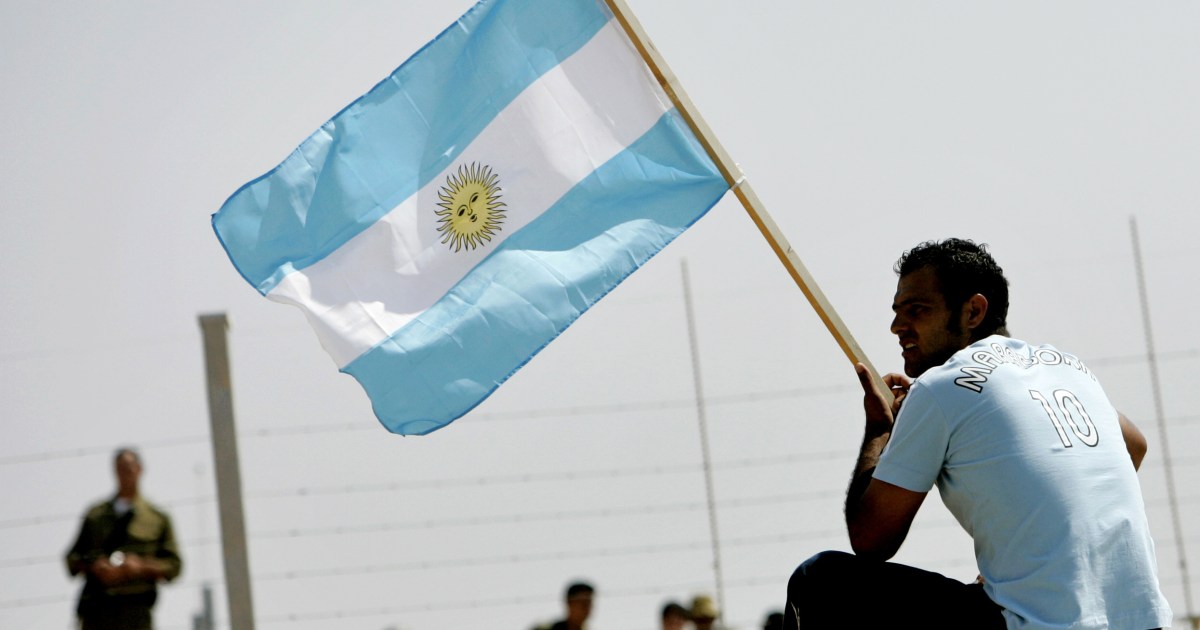 The Argentinian footballer, who has died at 60, proudly expressed his support for Palestine on several occasions.

A Palestinian waves the Argentina flag while wearing a Maradona t-shirt during a demonstration against the Israeli separation wall in the occupied West Bank village of Bilin [File: Eliana Aponte/Reuters]

As the world mourns the death of football’s legendary player, Diego Maradona, many people are also paying tribute to his vocal support for the Palestinian cause.

His death came two weeks after being released from a Buenos Aires hospital following brain surgery.

Maradona has been hailed as an anti-imperialist, left-wing socialist, who has supported progressive movements.

He was seen on more than one occasion accompanying Chavez, wearing an anti-George Bush shirt.

He unapologetically supported Palestine, even after hanging up his football boots.

Hamas spokesman Sami Abu Zuhri tweeted his condolences to Maradona’s family and fans across the world.

“We are so sad for the death of one of the greatest footballers, ‘Maradona’, who is known for his support of the #Palestine cause,” he wrote.

We are so sad for the death of one of the greatest footballers, “Maradona”, who is known for his support of the #Palestine cause.
Our condolences to his family and his lovers around the world.#Maradona pic.twitter.com/BHDs7ajkwg

In 2012, Maradona described himself as “the number one fan of the Palestinian people”.

“I respect them and sympathise with them,” he said. “I support Palestine without any fear.”

“What Israel is doing to the Palestinians is shameful,” he said in a statement.

“In my heart, I am Palestinian.”

In our hearts we were all Argentinian, imitating your dribbling and goals in the neighbourhoods of Palestine. I’m sure like other kids all over the world. pic.twitter.com/6NU3PNeL2r

A year later, reports circulated that Maradona was in negotiations with the Palestinian Football Association over the possibility of coaching the Palestinian national team during the 2015 AFC Asian Cup.

In July 2018, he met Palestinian President Mahmoud Abbas during a short meeting in Moscow, again reiterating his long-standing support for Palestinians.

“In my heart, I am Palestinian,” he told Abbas as he embraced him in a clip that was uploaded on his Instagram page.

In the same year, Maradona expressed his opinions on the US’s role in Syria, which was in its seventh year of civil war as President Bashar al-Assad consolidated his control over the majority of the country.

“You don’t need to go to university to know that the United States wants to wipe Syria out of existence,” he said.

Maradona: “You don’t need to go to the University to know that the USA wants to wipe Syria out of existence.”

The quote #r4today are omitting from their obituary this morning.pic.twitter.com/fHHpYUK2WH