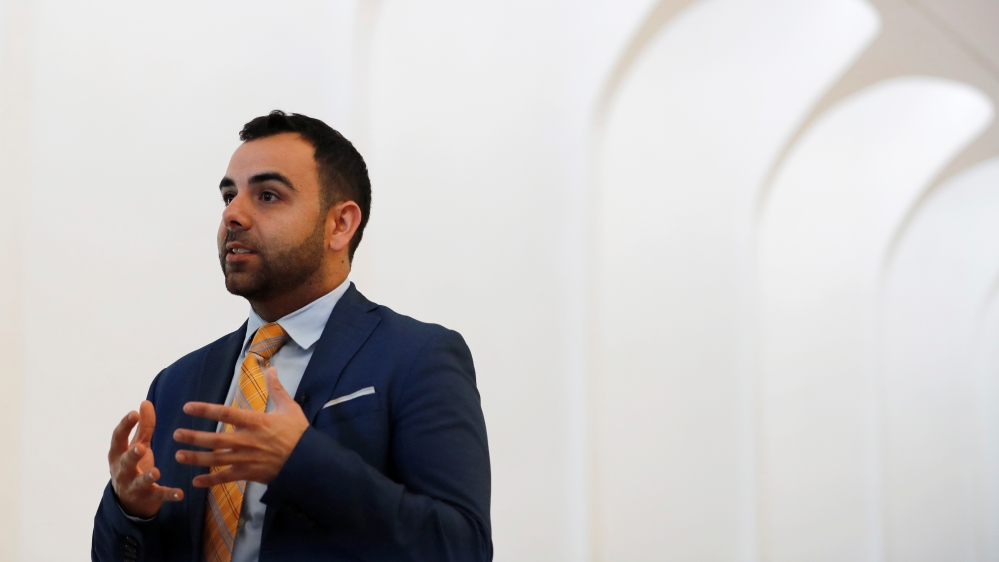 Israel has sought to expel Omar Shakir, HRW director for Israel and the Palestinian territories for more than a year [File: Ammar Awad/Reuters]

A senior Human Rights Watch (HRW) official who is set to be expelled from Israel over his alleged support for promoting boycotts of the country will continue carrying out his work from a neighbouring country, according to the rights group.

The Israeli government’s decision to expel Omar Shakir, a US citizen who represents HRW in Israel and the  occupied Palestinian territories , was upheld by Israel’s top court on November 5, after months of deliberations.

“Despite my deportation today, the Israeli government has failed to muzzle HRW or the human rights movement,” Shakir said at a press conference in Jerusalem, alongside Kenneth Roth, HRW’s executive director.

“It’s [the case] about an escalation of assaults on the human rights movement,” Shakir said on Monday, shortly before he is expected to leave Israel.

“There must be a reboot in the way the international community engages around this issue … So long as there’s no consequence for the regular human rights abuse, so long as impunity reigns, you will only see more and more rights defenders coming under pressure,” he said.

According to Roth, Shakir will continue to “direct the work”, and would likely resume working from Amman, the capital of neighbouring Jordan.

“Human Rights Watch will not submit to the blackmail of the abuser,” Roth said at the press conference.

“It so often happens the censorship effort has only heightened global interest in what’s being censored … It has only intensified the spotlight on Israeli misconduct,” Roth said.

Shakir’s departure on Monday afternoon will mark the first expulsion of its kind under a 2017 law allowing the deportation of foreigners who support boycotting Israel, though there have been cases of people being denied entry under the measure.

Israeli law bars entry to those who publicly support a boycott of Israel or its settlements in the occupied West Bank, considered illegal under international law.

The case against Shakir was initially based on alleged statements in support of a boycott he made before taking up his post, according to HRW.

The government later added new statements it alleged were in support of a boycott.

HRW says it has criticised Israel’s human rights record but has never advocated a boycott, adding that the same is true for Shakir since he joined the organisation. It says Shakir is being targeted for the group’s opposition to settlements in the occupied West Bank and its calls for companies to stop working with the settlements.

Today Israel deports me, culminating 2.5 year effort to muzzle human rights advocacy. But its done the opposite: it has made plain Israel’s disdain for intl norms, unified human rights community & @hrw work on Israel/Palestine will continue w/ me at helm from outside #WhoisNext pic.twitter.com/hHpXbW2Z73

“This has never been about BDS,” he said, referring to the Boycott, Divestment and Sanctions (BDS) movement for Palestinian rights.

“It has always been about the Israeli government’s efforts to muzzle Human Rights Watch, but it’s had exactly the opposite effect,” added Shakir, who also noted that HRW will “continue doing the work”.

Launched in 2005 by Palestinian civil society groups, the BDS movement seeks to use non-violent means to end the Israeli occupation of Palestinian territories, dismantle Israel’s separation wall, achieve equal rights for Palestinian citizens of Israel and implement the right of return for Palestinian refugees.

Israel sees the movement as a strategic threat and accuses it of anti-Semitism – a claim activists strongly deny.

Roth said by expelling Shakir, Israel was joining a “fairly ugly group of governments” – including Iran, Egypt and Venezuela – that have barred its researchers.

“They all thought that if you can somehow silence the messenger, you can then silence Human Rights Watch. It didn’t work out. We find ways to cover these countries even if our researcher is not able to be on the ground and we’ll do the same thing with Israel,” he said.

Despite Shakir’s deportation, his request for another hearing is still pending, according to the Israeli daily Haaretz.