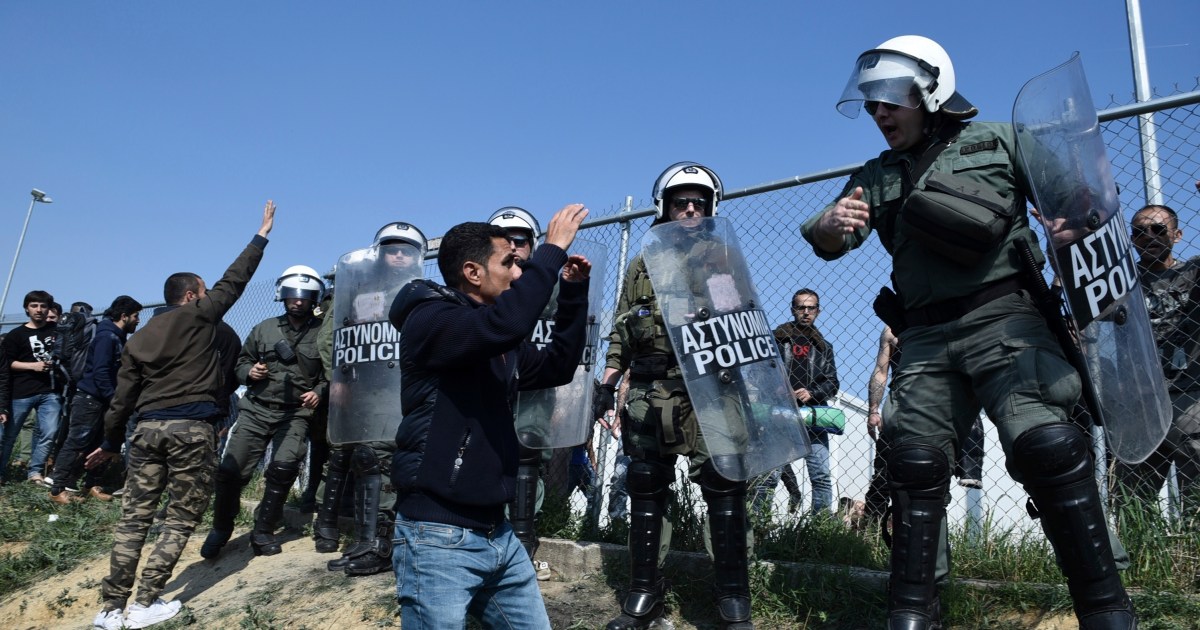 Protesting refugees and migrants gather as riot police guard a refugee camp in the village of Diavata, west of Thessaloniki in northern Greece [Giannis Papanikos/AP]

The world is becoming less tolerant of migrants, according to a poll released on Wednesday as Europe prepared to unveil a new asylum plan in the wake of a blaze at an overcrowded camp in Greece that left thousands without shelter.

But the sharpest changes in attitude were in Peru, Ecuador and Colombia, which have seen an influx of Venezuelans fleeing turmoil at home.

Canada was the most welcoming country, followed by Iceland and New Zealand, according to the index based on more than 140,000 interviews in 145 countries and regions.

The poll asked people their views about having migrants living in their country, becoming their neighbours and marrying into their families.

Index scores ranged from 1.49 in North Macedonia to 8.46 in Canada, just below the maximum possible score of 9.

Gallup migration expert Julie Ray said the slight global fall in acceptance – 5.21 in 2019 down from 5.34 in 2016 – was driven by marked changes in Latin American countries.

Peru’s score tumbled to 3.61 from 6.33 in 2016, while the number of Colombians who said migrants living in their country was a good thing dropped to 29 percent from 61 percent.

Refugees and migrants from the destroyed Moria camp gather at the entrance of a new temporary camp on the island of Lesbos, Greece [Yara Nardi/Reuters]The first Gallup Migrant Acceptance Index was conducted amid the backlash following the 2015 crisis in Europe when more than a million people headed to the continent fleeing war and poverty in the Middle East and beyond.

EU countries have long been at loggerheads over how to handle the influx of migrants, many of whom arrive in Mediterranean countries after perilous boat journeys.

The bloc’s executive will unveil a plan on Wednesday that will legally oblige all members to host their share of refugees – something rejected by Poland and Hungary, among others.

The proposal has been brought forward because of a fire on the Greek island of Lesbos a fortnight ago which destroyed a camp holding more than 12,000 refugees and migrants – four times the number it was supposed to.

Among European countries, only Sweden and Ireland made the Gallup top 10 of most-accepting countries.

Ray said some people would be surprised by the positive attitudes in the United States, where President Donald Trump has made curbing immigration a cornerstone of his policy.

“Despite the fact that immigration is such a hot topic in the US, Americans are mostly very accepting of migrants,” she said.

The US ranked sixth in the index, just behind Sierra Leone. Ray said Trump supporters were far more accepting of migrants than the global average, scoring 7.10.

Worldwide, the index showed acceptance of migrants was greater among younger generations, people with higher levels of education and those living in urban rather than rural areas.