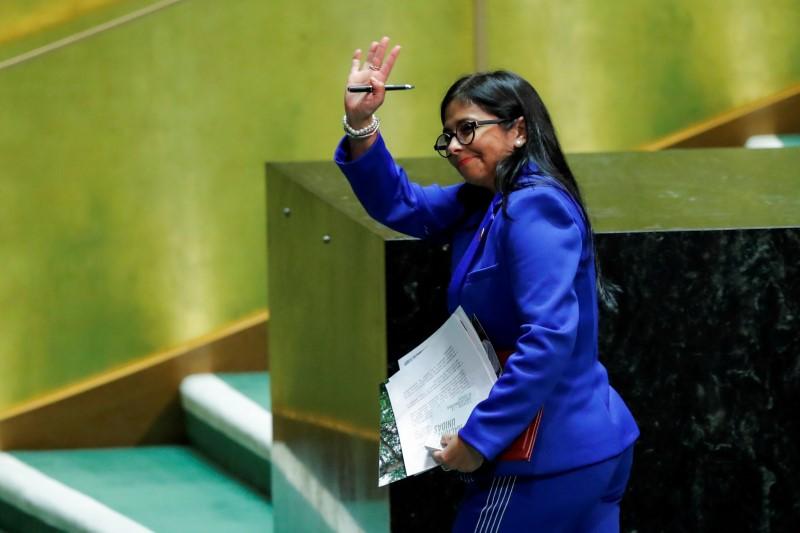 MADRID (Reuters) – Opposition parties rebuked Spain’s government on Friday over an encounter at Madrid’s international airport between a minister and a senior aide to Venezuela’s President Nicolas Maduro subject to a European Union (EU) travel ban.

Spain, along with most EU nations, does not view Maduro’s leftist government as legitimate, instead recognizing opposition leader Juan Guaido as president of Venezuela.

“I said ‘Hello’ to her on behalf of the Minister of Tourism and that’s it, nothing more,” he told reporters on Friday evening. He said he reminded Rodriguez that “she could not enter Spanish territory”.

“There was no meeting and no stepping onto Spanish territory,” Abalos said.

A Transport Ministry source earlier told Reuters “it was a greeting forced by circumstance” on the airport tarmac, adding that Abalos was there to meet Venezuelan Tourism Minister Felix Plasencia, a friend and Spanish citizen traveling on the same plane as Rodriguez.

“The transport minister had no formal contact with the Venezuelan vice-president and his intention in heading to the airport was not to meet with her,” the source added.

That did not, however, stop a shower of criticism.

“If this is confirmed, Abalos cannot continue to lead the ministry for even one more day,” Pablo Casado, leader of the conservative People’s Party (PP), told reporters. “Spain’s image and compliance with EU resolutions is very important.”

The 28-nation bloc slapped travel bans and asset freezes on Rodriguez and other officials in mid-2018.

According to Spanish news site VozPopuli, a flight carrying Rodriguez left Caracas on Sunday, landing in Madrid’s Barajas airport nine hours later. After some 14 hours in Madrid, it went on to Istanbul’s Ataturk airport.

Venezuela and Turkey are allies.

Two sources with knowledge of the matter told Reuters that Rodriguez was confined to an area of the airport not considered Spanish soil. A spokeswoman for the EU’s executive Commission said it was up to individual nations to interpret how sanctions apply to airport areas prior to passport controls.

Critics were not placated.

“Did Abalos meet with the vice-president of the Maduro totalitarian regime? With someone banned from entering the European Union as a high-ranking official of that tyranny?” the center-right Ciudadanos party’s spokesman Edmundo Bal tweeted, demanding that Abalos give an explanation to parliament.

Abalos is a senior member of Prime Minister Pedro Sanchez’ Socialist party that rules in coalition with junior party Unidas Podemos, a far-left movement which has supported Venezuela’s leftist ruling party in the past.

The controversy came days ahead of a planned visit to Spain by Venezuela’s opposition leader Guaido.

Sanchez does not have plans to meet him, which has angered right-wing opposition parties but been welcomed by Podemos.

Venezuela’s government did not immediately respond to a request for comment on Rodriguez’ stopover in Spain.