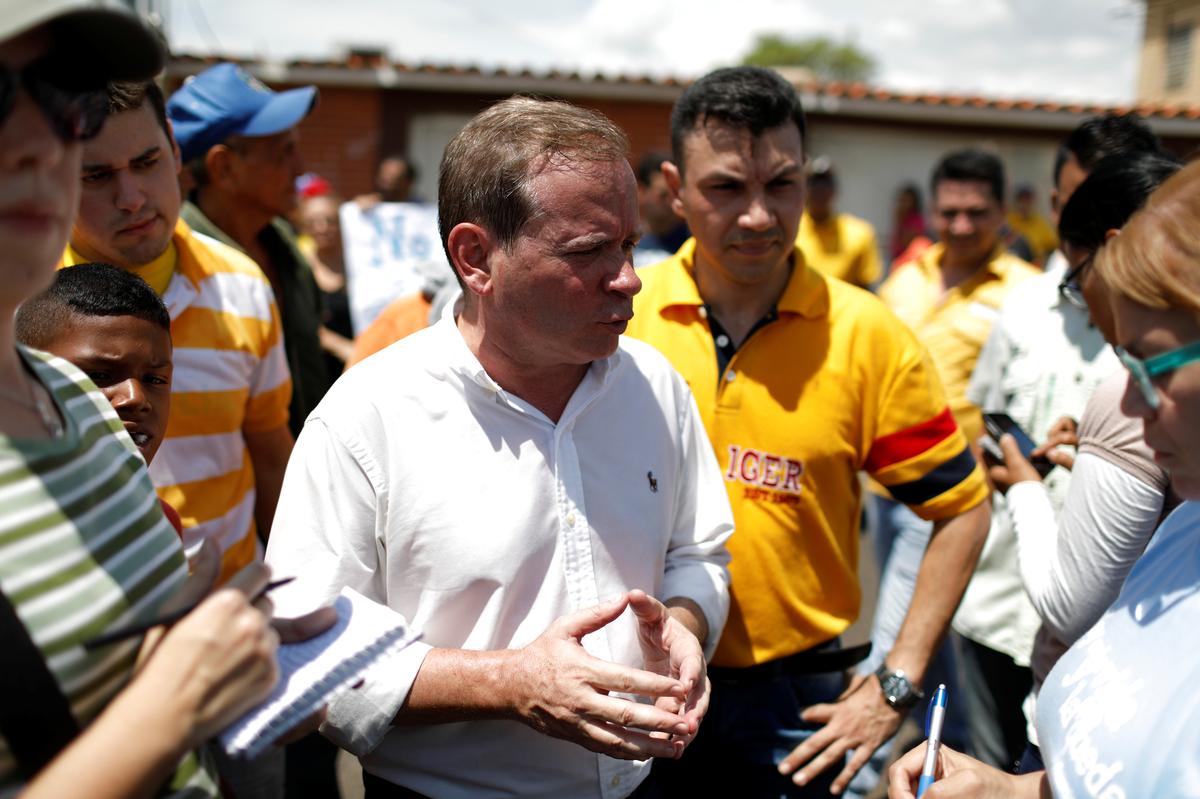 CARACAS (Reuters) – A Venezuelan opposition lawmaker whose parliamentary immunity was stripped last month said he is being targeted by President Nicolas Maduro for calling anti-government protests, at a time when the troubled OPEC nation has largely avoided a wave of unrest sweeping South America.

FILE PHOTO: Opposition leader Juan Pablo Guanipa talks to the media in front of a facility of the national electricity company Corpoelec during a protest against chronic blackouts and shortages of water in Maracaibo, Venezuela July 26, 2018. REUTERS/Marco Bello/File Photo

In videos filmed in an undisclosed location in Caracas in response to questions sent by Reuters, Juan Pablo Guanipa rejected authorities’ allegations against him for inciting rebellion and said Venezuelans should heed opposition leader Juan Guaido’s call to take to the streets on Nov 16.

“It is an attempt to silence the voices that have spoken up about protests recently,” Guanipa said. “This dictatorship will make every effort to avoid anything they feel could be the spark that lights the flame.”

Venezuela’s information ministry did not respond to a request for comment on Guanipa’s case. Maduro dismisses claims that his government is a dictatorship by pointing to the ruling socialist party’s election victories, and often describes opposition-led protests as violent destabilizing efforts.

The National Constituent Assembly, a pro-Maduro legislative body, stripped Guanipa of his immunity on Oct. 22 in response to a request by the Supreme Court. That allowed prosecutors to probe whether he committed crimes including treason by taking part in a failed military uprising led by Guaido in April.

The move came as Guaido, who presides over the opposition-held National Assembly, seeks to revive his flailing movement to oust Maduro. Guaido invoked the constitution in January to assume a rival presidency, arguing Maduro stole the 2018 election.

While protests against austerity measures and disputed election results have engulfed Ecuador, Chile and Bolivia in recent months, Venezuela has not seen similar unrest despite a long-running economic collapse that prompts thousands to emigrate daily.

Guaido has tried to regain momentum by supporting marches by teachers and nurses demanding better salaries, and Guanipa said he believed the move against him was prompted by his call for a protest in Caracas in solidarity with his home state of Zulia, which has been hit by blackouts and gasoline shortages.

Guanipa spoke at the Oct. 24 rally, where he said members of the Sebin intelligence agency came “very close” to him. He left on a motorcycle and went to a clandestine location in Caracas, where he has remained without seeing his wife or five children.

While 15 other lawmakers whose immunity was stripped this year have gone into exile or sought asylum in a foreign embassy or diplomatic residence, Guanipa said he plans to stay in hiding for now.

“I need to make the effort to stay here and intensify the fight,” said Guanipa, who in 2017 was elected governor of Zulia, but refused to take his oath of office in front of the Constituent Assembly, which the opposition considers illegitimate. A new election was held and a Maduro ally won.

Maduro, who calls Guaido a coup-mongering puppet of the United States, has warned that “jail awaits” anyone promoting violence during the opposition’s planned November protests.

The threat comes after the end of a round of negotiations between the government and the opposition, mediated by Norway, in September.

Maduro pacted some conciliatory measures from a negotiation with a separate group of opposition leaders, including the release from jail of National Assembly Vice President Edgar Zambrano and more than a dozen others considered political prisoners by the opposition.

There were still 399 political prisoners in Venezuela as of Oct. 28, according to rights group Penal Forum. After Zambrano’s release, one opposition lawmaker – Juan Requesens – remains in prison.

In a July report on Venezuela, the U.N. Human Rights Council said the government “has used arbitrary detentions as one of the principal means to intimidate and repress the political opposition.” It said it had collected information on 135 people arbitrary deprived of their liberty between 2014 and 2019.

The government responded the Council omitted information it provided showing that those cases involved police who had committed human rights violations or people who had committed homicide and other “serious crimes,” making it unfair to characterize them as being detained for political purposes.