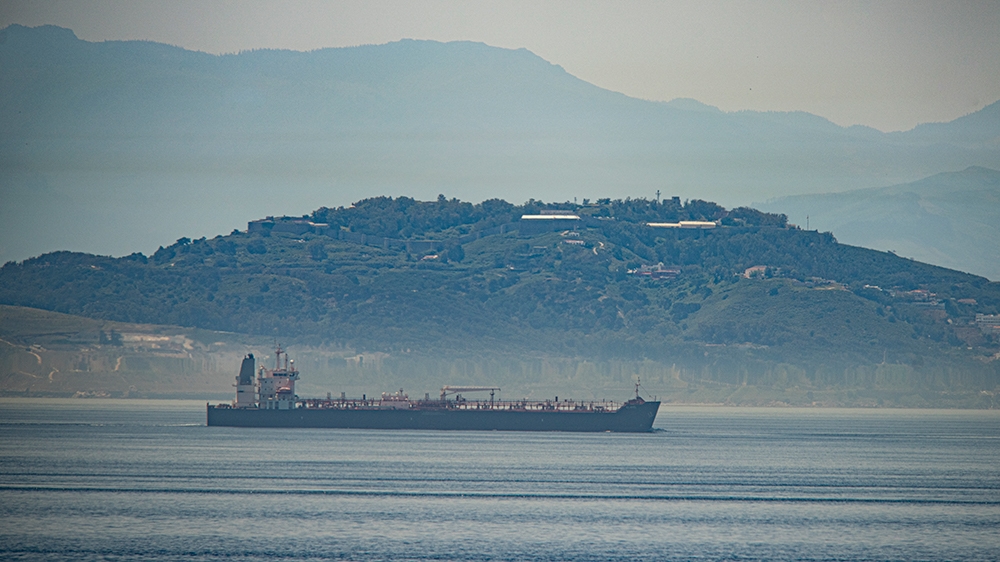 A view of oil vessel Clavel sailing on international waters crossing the Gibraltar stretch on May 20, 2020 [Marcos Moreno/AP]

The first of five Iranian oil tankers heading to Venezuela to help ease fuel shortages has entered the country’s waters, encountering no immediate signs of US interference amid a diplomatic standoff.

Amid heightened tensions due to what Venezuelan authorities described as threats from the United States, the oil vessel Fortune officially entered Venezuela’s Exclusive Economic Zone (EEZ) at about 7:30pm local time (11.30 GMT) on Saturday, according to the shipping tracker TankerTracker.

“The first Iranian tanker reached the Venezuelan coasts,” the Iranian embassy in Venezuela said in a Twitter post.

“Grateful to the Bolivarian Armed Forces for escorting them,” it added.

Venezuelan state television showed images of a navy ship and aircraft preparing to meet it. The government of President Nicolas Maduro had pledged that the military would escort the tankers once they reached the EEZ.

Fortune was heading to the El Palito refinery in Puerto Cabello in northern Carabobo state, according to state television.

The rest of the Iranian ships – the Forest, Petunia, Faxon and Clavel – are expected to arrive in the coming days.

The shipments have caused a diplomatic standoff between the US, Iran and Venezuela, which are both under harsh US economic sanctions. Washington was considering measures in response, a senior US official was quoted as saying by Reuters News Agency, without elaborating.

“This [the shipment] would be an example of how the Iranian regime taking the wealth of the Iranian people and wasting in Venezuela on Maduro,” Brian Hook, the US special representative for Iran, said earlier.

The US recently beefed up its naval presence in the Caribbean for what it said was an expanded anti-drug operation. Pentagon spokesman Jonathan Hoffman said on Thursday he was not aware of any operations related to the Iranian vessels.

Venezuela has been locked in a political crisis for more than a year, with the US and more than 50 other countries recognising opposition leader Juan Guaido as the country’s rightful leader and accusing Maduro of rigging elections in 2018. Maduro has accused the opposition of stirring up violence and of attempting a coup with the help of the US.

Iranian President Hassan Rouhani had on Saturday warned the US against disrupting the shipments as the oil tankers passed through the Caribbean Sea on their way to Venezuela.

Rouhani stressed that Iran did not want a new conflict with the US, but his country would reserve the right to defend its interests.

“We therefore hope that the Americans will not make a mistake in this regard,” said the president, according to comments published on his office’s web portal.

The tanker flotilla is reportedly carrying about 1.53 million barrels of gasoline and alkylate to Venezuela.

The fuel from Iran comes at a time when the shortage of gasoline in Venezuela, chronic for years in some parts of the country, has worsened during the coronavirus pandemic.

Venezuela has the largest oil reserves in the world, but its production is in freefall, a collapse that experts attribute to failed policies, lack of investment and corruption.