Posted By: admin 5 days ago 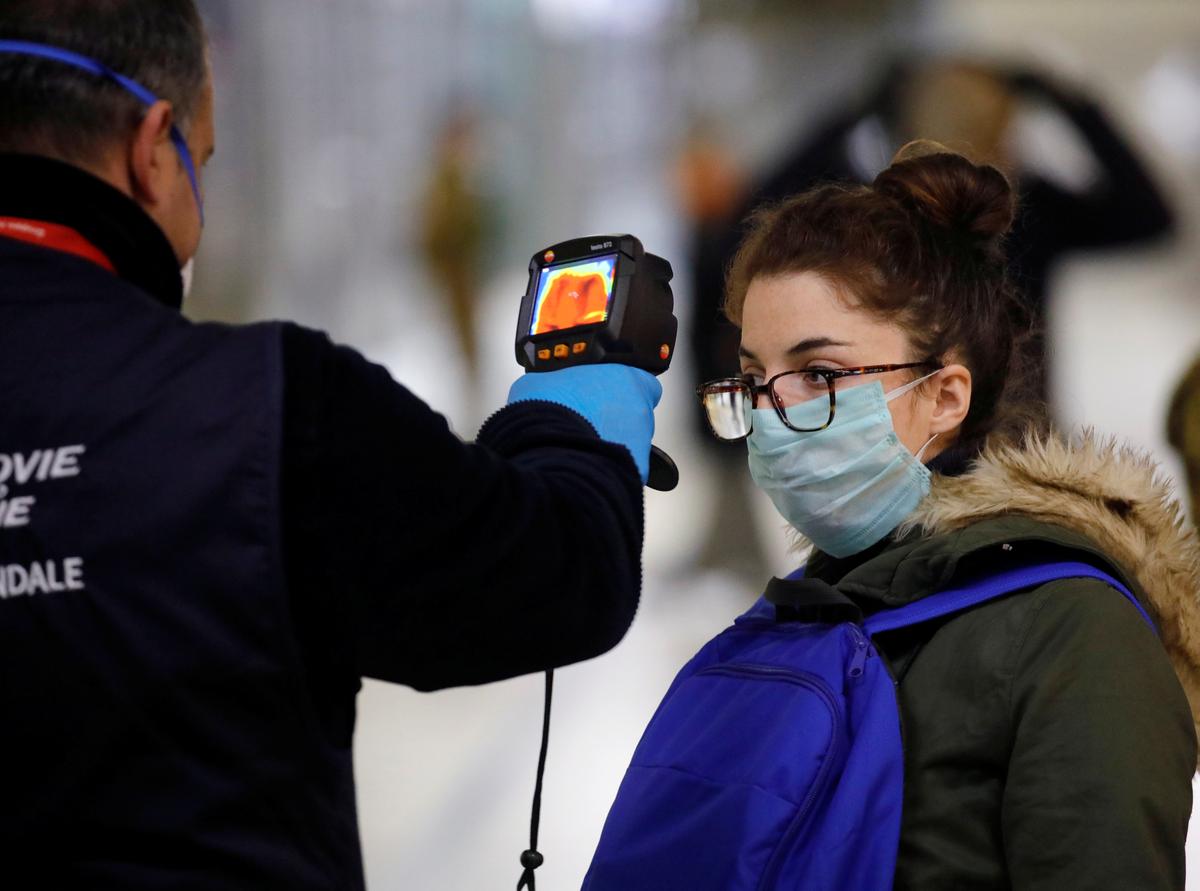 (Reuters) – More countries imposed lockdown measures as coronavirus cases across the globe ballooned, led by a sharp rise in infections in Europe. Italy banned travel within the country, nearly one in three Americans were ordered to stay home and New Zealand will move to its highest alert level imposing self-isolation.

A train security staff member checks the temperature of a passenger arriving from Turin and Milan by train at Naples Central station as Italy ramps up measures to slow the spread of coronavirus disease (COVID-19) in Naples, Italy, March 22, 2020. REUTERS/Ciro De Luca

* For an interactive graphic tracking global spread: open tmsnrt.rs/3aIRuz7 in an external browser

* Unions in Italy’s Lombardy region announced strikes on Monday for tougher shutdown measures to protect the health of their workers.

* Britain’s health minister said stricter restrictions on movements would be brought in if people did not observe advice to avoid social interaction, warning such measures would also have to stay in place longer.

* The number of cases in Germany has risen to 22,672 with 86 deaths, a public health agency tally showed on Monday.

* Spain has nearly 4,000 health workers infected, more than one in 10 of total confirmed cases, officials said on Monday.

* Polish prisoners will be given the possibility to serve their sentences at home, under a justice ministry proposal that could benefit up to 20,000 convicts.

* The U.S. surgeon general issued his starkest warning to date, telling Americans the crisis was “going to get bad” this week, as nearly one-third of Americans awoke to “stay at home orders.”

* Cuba said it dispatched a brigade of doctors and nurses to Italy for the first time this weekend at the request of the worst-affected region, Lombardy.

ASIA AND THE PACIFIC

* Australia shut down pubs, clubs, gyms and houses of worship on Monday as cases topped 1,600 and authorities denied entry to a cruise ship carrying hundreds complaining of respiratory illnesses.

* New Zealand said on Monday it would move to its highest alert level, imposing self-isolation.

* Mainland China on Monday reported a drop in its daily tally of new cases, reversing four straight days of increases, as Beijing ramped up measures to contain imported infections.

* South Korea on Monday reported its lowest number of new cases since Feb. 29, with the extended downward trend boosting hopes that the outbreak may be abating.

* Streets in Delhi were deserted as India said it will shut down domestic flights and imposed a curfew on Maharashtra from Tuesday.

* Uzbekistan will lock down its capital Tashkent from March 24.

* Southeast Asian countries considered more emergency powers on Monday as the biggest daily jump in cases in Malaysia took the number of infections in the region above 4,000.

* Tens of thousands of migrant workers left Thailand for neighbouring countries as the country prepared to close many land border crossings late on Monday.

* Iran’s President said on Monday the United States should lift sanctions if it wants to help the country, which has had around 1,800 deaths and over 23,000 cases, adding that Iran had no intention of accepting Washington’s offer of humanitarian assistance.

* Saudi Arabia imposed a nationwide curfew starting on Monday after reporting a jump of almost a quarter in cases, while the United Arab Emirates suspended all passenger and transit flights to and from the country.

* Syria on Sunday confirmed its first case after weeks of rejecting opposition allegations that the disease had already reached the country.

* Congo imposed a two-day lockdown in a mining province.

* Fresh support announced by the Federal Reserve failed to lift Wall Street on Monday, after Europe and Asia had both been overwhelmed by the coronavirus pandemic and growing number of national lockdowns that could push the global economy deep into recession. [MKTS/GLOB]

* The United Nations will create a fund to prevent the spread support the treatment of patients worldwide, Norway said on Monday.

* India’s stock market on Monday suffered its worst single-day rout in history as the coronavirus disrupted businesses and forced several districts into lockdown.

* Widening curbs on travel led airlines to ramp up flight cancellations on Monday.

* Japan’s prime minister said for the first time on Monday that the Tokyo Olympic Games may need to be postponed if the event cannot be held in its “complete form”.

* Pope Francis’s trip to Malta, scheduled to take place on May 31, has been postponed indefinitely.

* Multiple sports events have been cancelled or postponed.