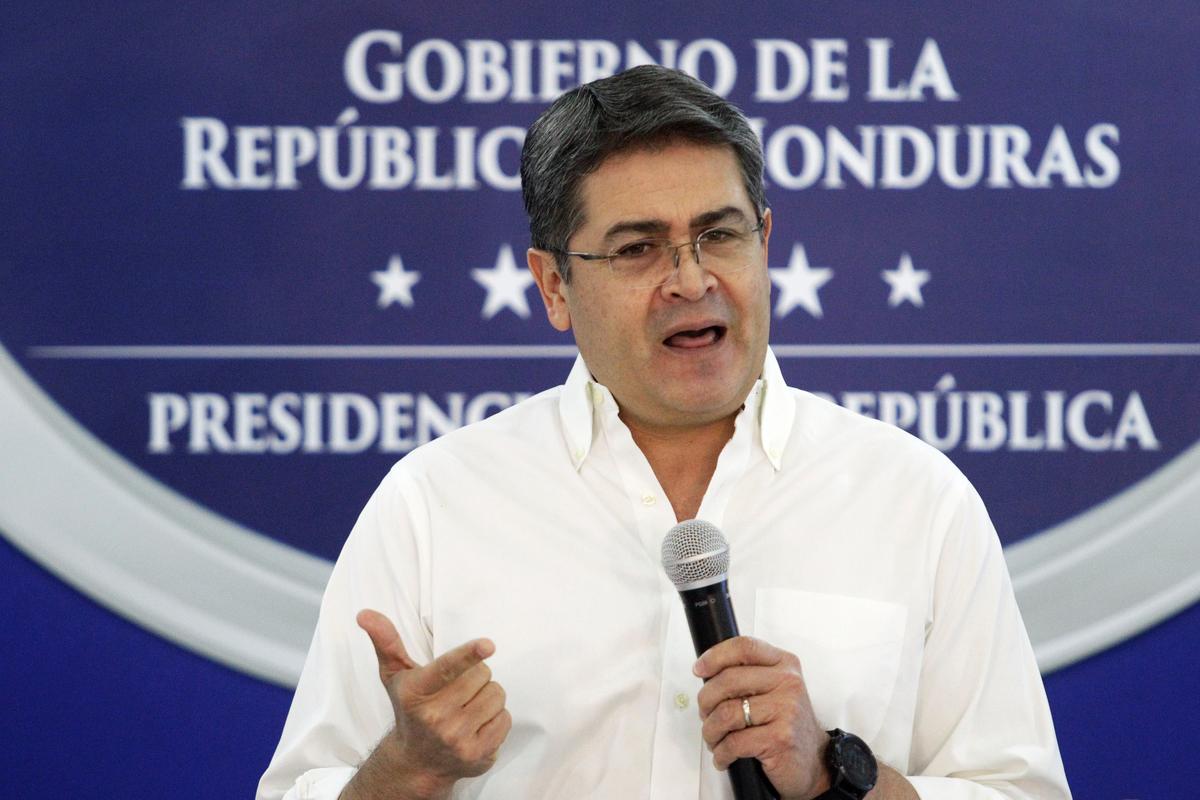 (Reuters) – A U.S. prosecutor on Wednesday accused Honduran politician Juan Antonio “Tony” Hernandez of smuggling tons of cocaine into the United States under the protection of his brother, President Juan Orlando Hernandez.

Tony Hernandez pleaded not guilty. His lawyer denied he took part in drug trafficking or took any bribes.

A lawyer for Guzman also denied his client made the pay off.

President Hernandez said on Twitter that the allegations against him were “100% false, absurd and ridiculous,” and reiterated denials he was involved in narcotrafficking.

The trial for his brother is unfolding as Hernandez’s administration faces intense pressure from U.S. President Donald Trump to curb migration to the United States.

Last week, Trump stood side-by-side with the Honduran leader in New York, giving a thumbs up, as the countries struck a deal under which Honduras would take in more asylum seekers.

IS HONDURAS INVOLVED IN THE DRUG TRADE?

With its Caribbean and Pacific coastline, the small Central American country has a long history as a corridor for cocaine, primarily from Colombia and Venezuela.

It emerged as the key shipment point from South America in the early 2000s after law enforcement broke up routes through the Caribbean, according to the United Nations Office on Drug and Crime.

Cocaine flows to Honduras surged after a coup ousted then-President Manuel Zelaya in 2009. The drugs generally entered either by boat or clandestine airstrips.

By 2010, roughly 65 tons of the 80 tons of cocaine transported to the United States by air landed in Honduras, which represented 15% of U.S.-bound cocaine flow, according to the UN.

HOW DID TONY HERNANDEZ END UP ON TRIAL?

In 2012, bowing to U.S. pressure, Honduran President Porfirio Lobo signed a bilateral treaty to extradite narcotraffickers. Juan Orlando Hernandez, then president of Congress, pushed it through the legislative branch.

The first to be extradited was Carlos Arnoldo “El Negro” Lobo in May 2014, after Hernandez won the presidency on a ticket to clean the streets of drug gangs and stepped up cooperation with U.S. authorities. A U.S. court sentenced Lobo in December 2014 to 20 years in prison, followed by five years of supervised release, for conspiracy to distribute cocaine.

The president’s brother Tony Hernandez, a lawyer and former lawmaker, was arrested in Miami on Nov. 23, 2018. The unsealed indictment called him a “large-scale drug trafficker” who operated in Colombia, Honduras and Mexico to import cocaine to the United States.

A leader of the Cachiros cartel had testified against him in a March 2017 trial in New York, saying he had taken a bribe to help launder drug funds. Hernandez’s lawyer has denied this.

WAS PRESIDENT HERNANDEZ MENTIONED IN THE CASE?

In a pre-trial motion filed in August by the U.S. government, prosecutors in the case alleged that as congressman and presidential candidate, and then as president, Hernandez attempted to shield his brother from extradition.

While his name is redacted, the document identifies “co-conspirator 4” as the man sworn in as Honduran president in January 2014.

The August court filing alleges that Tony Hernandez and his co-conspirators – including co-conspirator 4 – sought to enrich themselves and finance campaigns by the National Party using illicit drug funds, including Hernandez’s successful 2013 presidential campaign.

President Hernandez has not commented on the specifics of the allegations in the August court filing but he has repeatedly denied any involvement in narcotics trafficking.

In a speech at the United Nations last week, he described allegations of his links to trafficking as a “dirty smear campaign” by criminals in revenge for his efforts to dismantle organized crime in Honduras.

On Wednesday, his office said the government had broken up the six most powerful drug cartels in Honduras and initiated extradition proceedings for at least 24 people to the United States.

President Hernandez told a news conference on Thursday, responding to the accusations against his brother: “Nobody is above the law.”

“I’ve never intervened, nor will I, to protect anybody – not friends, nor fellow party members, nor family members – absolutely nobody.”