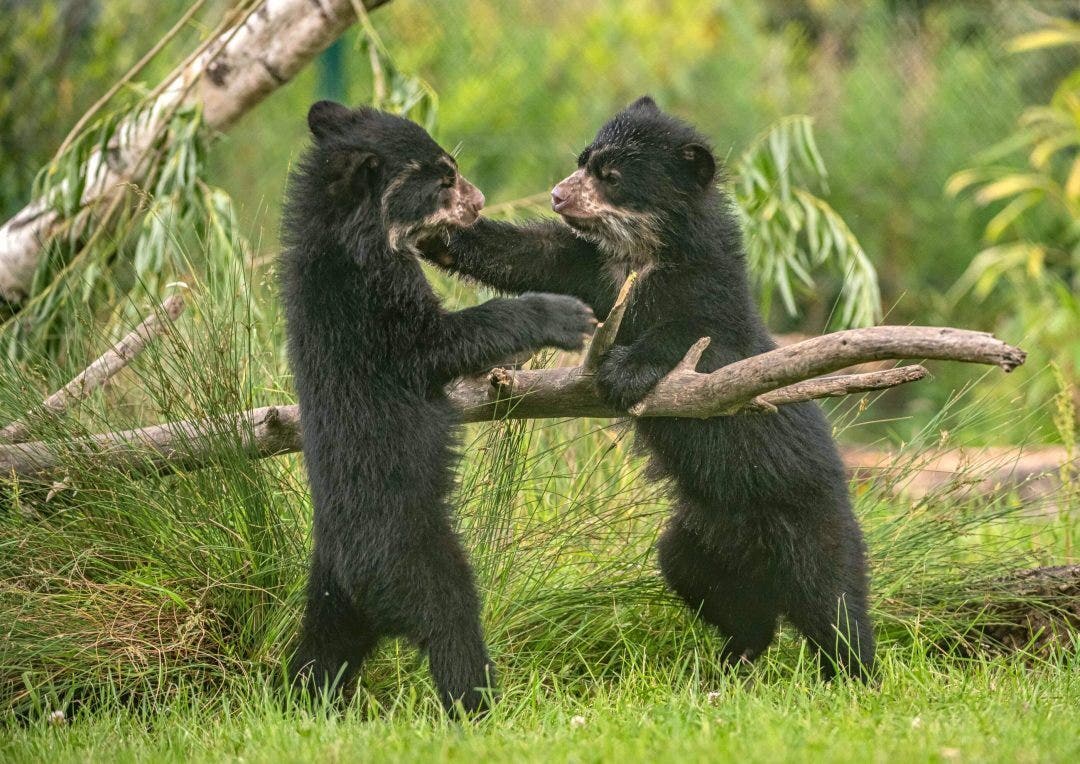 A pair of Andean bear cubs were born earlier this year in the U.K., becoming the first of their kind to be born in the country.

Known as Pacha (a female) and Mateo (a male), the small mammals from South America were initially born in January, but only ventured outside on Thursday, British news agency SWNS reports. The cubs were born at one of England’s largest zoo, Chester Zoo in Cheshire, to their mom, Lima.

“Andean bears are incredibly shy animals and, for this reason, are still something of a mystery to conservationists,” Lucy Edwards, the zoo’s assistant team manager of carnivores, said. “So to see mom Lima allowing her two little cubs to explore so freely and enjoy a bit of friendly rough and tumble is just wonderful – it’s very, very special.”

These adorable ‘Paddington Bear’ cubs are the first Andean twins ever to be born in the UK. (Credit: SWNS)

PENGUINS ARE BEING ENTERTAINED WITH BUBBLE MACHINE BECAUSE OF CORONAVIRUS PANDEMIC

The seven-month-old twins are healthy, Edwards added, noting the two were given a check over a few weeks ago, while the zoo was closed because of the coronavirus pandemic.

Andean Bears, sometimes known as the “spectacled bear” or the breed of bear in the famous “Paddington Bear” movies, are endangered, according to the World Wildlife Fund.

Female Pacha and her brother Mateo were captured play fighting on video as they emerged from their den for the first time. The cubs were born at Chester Zoo in January but only braved the outside to explore their new home on Thursday. (Credit: SWNS)

With the zoo now open to the public, Edwards said it’s crucial for people to learn more about the bears and see them in an effort to rebuild the species population numbers.

“The new arrivals are vital additions to the endangered species breeding program, which is working to preserve the species, help conservationists to learn more about them and, ultimately, protect the long-term future of these beautiful bears,” Edwards explained.

She continued: “Alongside this important work in the zoo, our conservationists have also been working in Bolivia, alongside our partners the local NGO PROMETA and the University of Oxford, to understand how Andean bears live in the wild. Together, we are striving to find new ways to prevent conflict between bears and humans – a key threat to this species.”

It’s estimated there are between 6,000 and 10,000 left in the wild, primarily in South America, largely in countries such as Peru, Venezuela, Colombia, Ecuador and Bolivia.