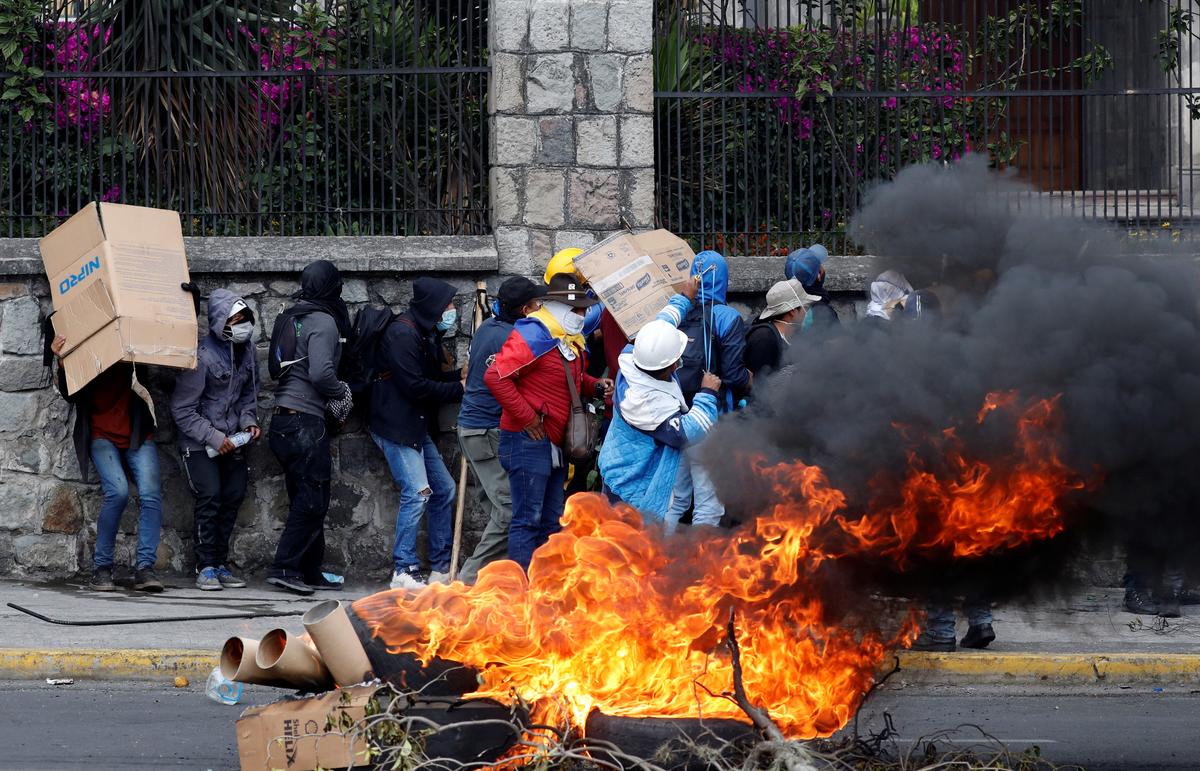 The streets of downtown Quito resembled a war zone. Plumes of tear gas clouded streets littered with bricks and small fires, as groups of people huddled behind walls and makeshift barricades for protection.

Human rights groups and protesters have denounced the police crackdown as heavy handed and urged authorities to issue restraint. The police said on Twitter on Saturday that the protests were not peaceful.

A protester threw a Molotov cocktail at anti-riot police on Saturday, according to a Reuters witness.

The clashes erupted before the scheduled start of the latest protest to demand Moreno repeal a law he passed last week that ended a four-decade long fuel subsidy, a key part of his efforts to rein in the fiscal deficit after signing a $4.2 billion loan deal with the International Monetary Fund (IMF).

Moreno has repeatedly refused to overturn the measure, and protest organizers have rejected his proposal for direct talks as an attempt to divide indigenous groups that have led the protests in recent days.

Nearly 20 food markets in Quito closed their doors due to the threat of violence, according to the District Retail Coordination Agency, which represents the city’s markets.

Outside of Quito’s historic district, the main center of conflict, streets were empty and shops shuttered in the city’s northern and southern districts, a Reuters witness said.

Protesters are furious about what they described as disproportionately violent attacks by police. As protest organizers churned out videos showing wounded protesters, Moreno’s government has remained largely silent. It abruptly canceled a scheduled Saturday news conference.

Moreno has said authorities have faced extreme acts of violence and accused, without evidence, Venezuelan President Nicolas Maduro and former Ecuadorean president Rafael Correa of sending people to stir up unrest in the protests. Maduro and Correa deny the accusations.

On Friday, after Moreno proposed direct talks with protest organizers for the first time, police fired tear gas at a crowd of protesters who had gathered peacefully at the National Assembly, according to Reuters witnesses. Clashes at the building extended past midnight on Friday and resumed anew hours later early on Saturday.

At least four people have been killed in the unrest and hundreds have been wounded and arrested.

Oil wells have been closed by protesters in parts of the country, curbing production of more than 1 million barrels of crude so far, the energy ministry said on Saturday. [L2N26X07X]

A Chinese-owned copper mine announced it was temporarily limiting its operations as a precautionary measure.

The United Nations reiterated its offer to help mediate the conflict. “We’re ready to support an efficient and inclusive process to generate lasting solutions for development and peace in the country,” the UN’s branch in Ecuador said on Twitter.

The IMF has long been a lightning rod for conflict in Latin America. Argentine President Mauricio Macri was trounced in an August primary vote amid stiff opposition to an IMF deal he signed last year.