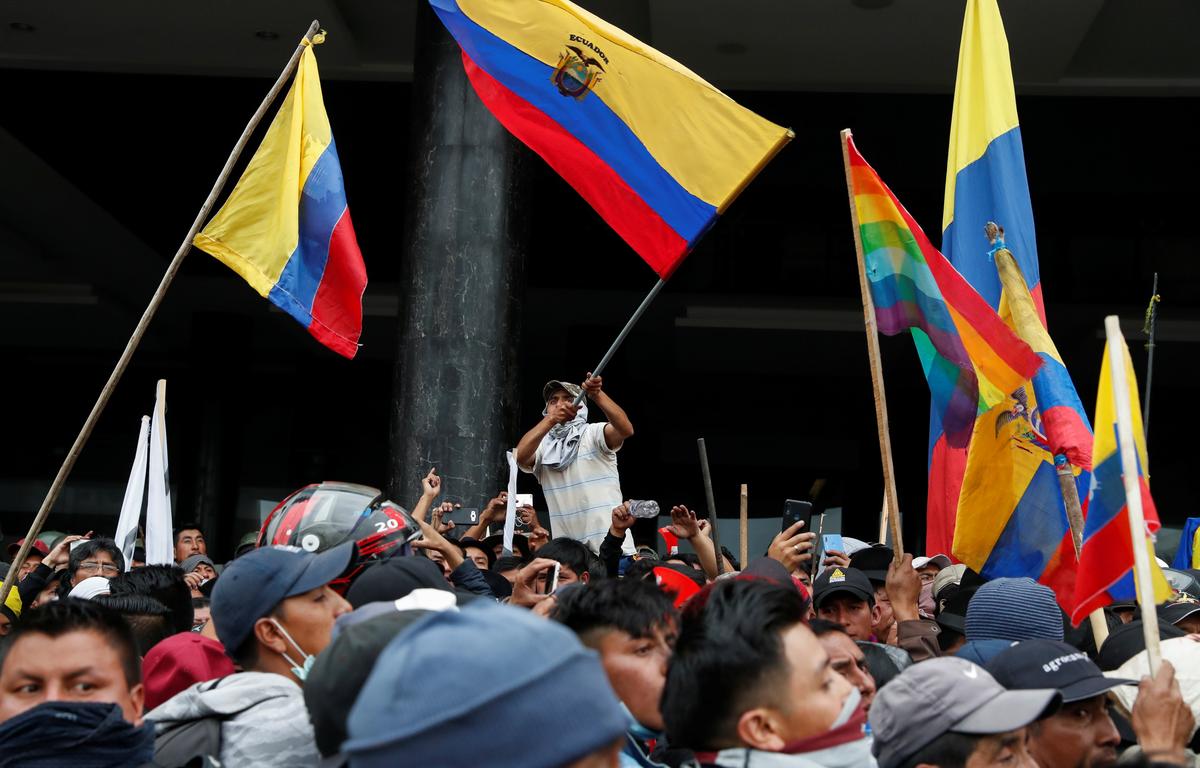 QUITO (Reuters) – Ecuadorean President Lenin Moreno on Tuesday ordered a curfew around government buildings after six days of violent anti-austerity protests that have pushed his administration out of the capital Quito and brought hundreds of arrests.

Following tactics that have toppled past governments, thousands of indigenous demonstrators have flooded the highland capital. Some burst through security cordons to briefly enter the National Assembly on Tuesday afternoon, waving flags, pumping their fists and chanting: “We are the people!”

Elsewhere in Quito and other flashpoints, masked and stick-wielding protesters hurled stones and battled with security forces, who responded with tear gas. The clashes injured 19 civilians and 43 police officers, authorities said.

Facing the biggest challenge yet to his 2-1/2-year rule, President Lenin Moreno has declared a state of emergency here and relocated government operations to the coastal city of Guayaquil where there has been less trouble.

In a written decree on Tuesday, Moreno ordered that authorities restrict movement close to government buildings and strategic installations between 8 p.m. and 5 a.m. to keep order.

The government is seeking mediation from the United Nations or Roman Catholic Church. “We encourage dialogue as the necessary route to find a common cause that prioritizes the national interest and social peace,” Moreno said.

Protests erupted last Thursday when the government cut fuel subsidies here as part of a package of economic reforms, in keeping with a $4.2 billion International Monetary Fund (IMF) loan.

Indigenous groups and others have been barricading roads with burning tires, rocks and branches. Police have deployed armored vehicles and water cannon.

Almost 680 people have been arrested, authorities say, including a legislator who supports Moreno’s predecessor Rafael Correa.

Moreno has accused the leftist Correa, his one-time mentor and boss when he was vice president, of seeking a coup with the help of Venezuela’s President Nicolas Maduro.

Moreno had enthusiastically backed Correa during his decade-long rule but broke with him after winning a 2017 election to succeed him, and moved economic policies to the right.

Speaking in Belgium, where he lives in self-imposed exile, Correa scoffed at the accusation.

“They are such liars … They say I am so powerful that with an iPhone from Brussels I could lead the protests,” he told Reuters. “People couldn’t take it anymore, that’s the reality,” he said, referring to economic belt-tightening measures.

Maduro, who has presided over an economic implosion and political crisis in Venezuela, denied on Tuesday that he had helped foment the protests and said Ecuador was rejecting the IMF’s “savage capitalist model.”

“That’s why the Ecuadorean people are in the streets, not because of Maduro, because of survival,” he said.

With protesters swarming around Quito, various government buildings were attacked overnight, authorities said, adding to looting and the destruction of ambulances and police vehicles in recent days.

In one incident, two people appeared to have fallen from a bridge in Quito during confrontations between police and protesters. Videos on social media showed their bodies lying motionless on the ground, and the government promised an investigation. Indigenous groups have also captured some soldiers.

The unrest has affected oil output in the OPEC member. Ecuadorean state-run Petroamazonas estimates it could lose some 188,000 barrels-per day, or more than a third of its crude production, due to unrest at its facilities.

“There are groups bent on causing chaos and confrontation, endangering democratic order,” a government statement said.

Dialogue was necessary, the statement added, citing possible measures to compensate the impact of fuel price rises, such as credit lines for farmers and transport cooperatives.

Although he enjoys the support of business and the military, Moreno’s popularity has sunk to under 30%, compared with 70% after his 2017 election.

Indigenous-led protests brought down three presidents in the years before Correa’s rule.

Seven Latin American countries accused Maduro’s “regime” in Venezuela of seeking to destabilize Ecuador and expressed their backing for Moreno in a statement. Venezuelan opposition leader Juan Guaido, whom many nations recognize as president, also accused Maduro of financing the protests in Ecuador.