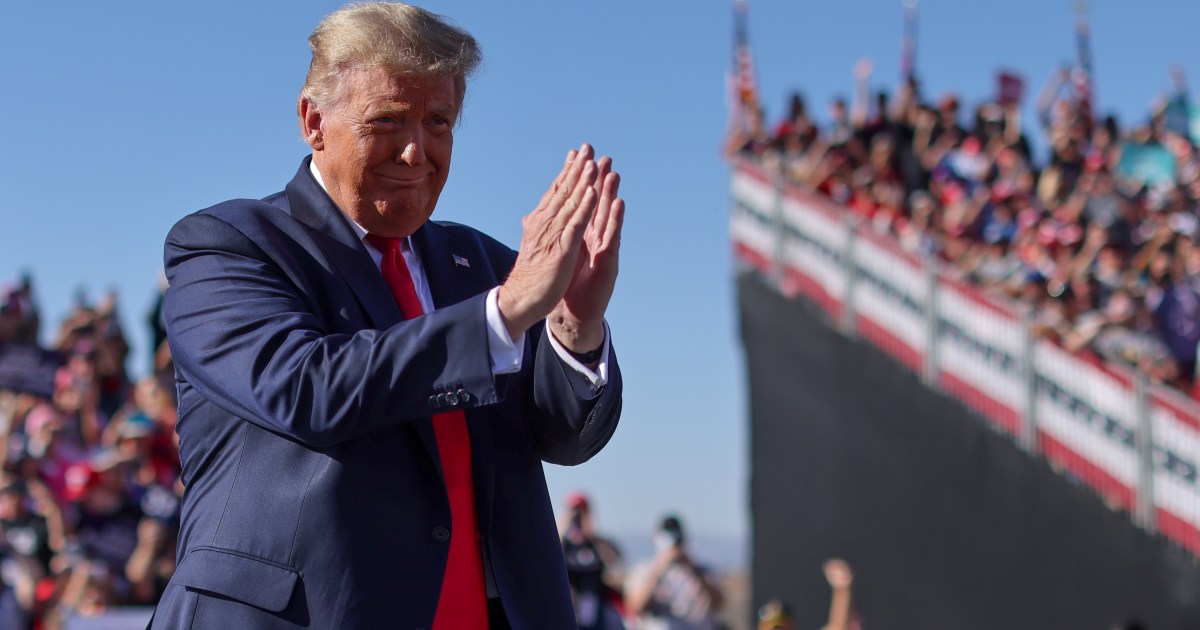 Hello and welcome to Al Jazeera’s continuing coverage of the United States elections.  This is Jihan Abdalla.

“These cases are not thought to be an indication of spread from the rally at this time, but rather two independent cases among individuals who were in attendance,” The Gaston County Department of Health and Human Services said in a statement.

The department recommended anyone who attended the president’s October 21 rally assess their own risk, monitor for symptoms and get tested, if necessary.

Trump’s campaign says it is postponing their Thursday night rally in Fayetteville, North Carolina, for a few days as Tropical Storm Zeta bears down on the Northeast.

“Because of a wind advisory issued with gusts reaching 50 miles per hour and other weather conditions, the outdoor Fayetteville, NC rally has been postponed until Monday,” the campaign said in a statement.

Several North Carolina counties were under tropical storm watch Thursday afternoon. North Carolina is a battleground state that Trump won in 2016 but that Democrat Joe Biden is pushing for in 2020.

A number of folks here in the Tampa heat are suffering under the sun. 86 degrees. Couple of calls for medics here.

The US Supreme Court rejected another bid by North Carolina Republicans to block the extension of a deadline for receiving mail-in ballots.

The justices denied a request by Republican lawmakers in the state to put on hold an agreement made by state election officials allowing the extension that a North Carolina state court had approved.

Justice Amy Coney Barrett, who joined the court on Tuesday as Trump’s third appointee, did not participate in the case. Barrett did not have time to fully review the case filings, a court spokeswoman said in a statement.

More than 80 million Americans have already cast ballots in the presidential election, according to a tally from the US Elections Project – setting the stage for the highest participation rate in over a century.

The record-breaking pace, more than 58 percent of total 2016 turnout, reflects intense interest in the vote.

Huge numbers of people have voted by mail or at early in-person polling sites amid concerns the coronavirus could spread at busy Election Day voting places.

Joe Biden walking towards the stage at a drive-in, Get Out the Vote campaign stop in Coconut Creek, Florida, US [Brian Snyder/Reuters]

Biden: ‘This guy doesn’t understand much of anything’

Speaking at a drive-in rally in in Broward county, Florida Biden addressed supporters and blasted Trump for his coronavirus response and handling of protests calling for racial justice in the country.

He said Trump will not even say the phrase “Black lives matter.”

He also encouraged residents of the key battleground state to vote.

“This election is the most important one you’ve ever voted in…The heart and soul of this country’s at stake,” he said.

Biden also made a direct pitch to Florida’s Latino voters by saying Trump is “the worst possible standard-bearer for democracy” in places like Cuba and Venezuela.

Florida’s sizable and diverse Latino population could be key to Biden’s chances in Florida, a state that remains a must-win for Trump. While the state’s Cuban population has traditionally trended Republican, Democrats believe they have an opening with Florida’s Cubans because of Trump’s move to freeze relations with the nation and the changing demographics of the population.

US President Donald Trump speaking during a campaign rally outside Raymond James Stadium, in Tampa, Florida, US [Jonathan Ernst/Reuters]

Trump addressed a large rally in Tampa, and vowed to keep the US economy open, even as cases of coronavirus continue to surge in Florida and dozens of other states.

He then touted newly released data from the Commerce Department showing that the economy grew by an annualised rate of 33.1 percent in the third quarter, beating expectations, but leaving the economy 3.5 percent below where it was at the end of 2019.

Two polls of likely voters in Florida out today show Biden with small leads, which normally would be cause for celebration in a state known for its razor-thin presidential contests. However, both polls continue to show Biden lagging among Latino voters, a significant part of Florida’s electorate.

There’s been concern among Democrats about Biden’s lower than expected support among Florida Latinos. Clinton won Latinos there by 27 points in 2016, according to exit polls. Trump won Florida by 1.2 percentage points in 2016.

Both Biden and Trump are campaigning in Florida today.

Trump is also heading to North Carolina today (Biden hasn’t been there since September 23, though his full schedule through Election Day has yet to be announced). Two polls show an extremely tight race there as well.

A New York Times/Siena College poll released today shows Biden with a slim 48-45 percent lead over Trump among likely voters. A UMass Lowell poll has them knotted up at 48 percent apiece. Trump won North Carolina by 3.7 percentage points in 2016.

In a new video advertisement, Biden pledged to issue an executive order creating a task force to unite migrant families who were separated under Trump’s administration.

Despite a federal judge’s order that the government reunite families who had been separated at the United States-Mexico border under Trump “zero tolerance” migration policy, the parents of 545 children still have not been found.

Biden issued a statement reminding voters that the economy is still in a “deep hole” and that the recovery, which benefited mostly “those at the top”, is slowing.

The data from the Commerce Department showed that the economy grew by an annualized rate of 33.1 percent in the third quarter, beating expectations, but leaving the economy 3.5 percent below where it was at the end of 2019.

Success in a Biden-Harris Administration will not be measured just by the stock market or GDP growth, but by the extent to which growth is raising the pay, dignity, and economic security of our working families—especially those who have been left behind. https://t.co/HQZ8UbUb3f

Trump meanwhile promised voters they would keep the growth going if given another term.

“GDP number just announced. Biggest and Best in the History of our Country, and not even close,” Trump tweeted. “So glad this great GDP number came out before November 3rd.”

GDP number just announced. Biggest and Best in the History of our Country, and not even close. Next year will be FANTASTIC!!! However, Sleepy Joe Biden and his proposed record setting tax increase, would kill it all. So glad this great GDP number came out before November 3rd.

Voters say the economy is one of the most important issues they are weighing during this presidential election. Roughly half of the 22 million jobs lost during the pandemic have been recovered, but new hiring is slowing.

The US economy grew at a record pace in the third quarter as the government injected more than $3 trillion worth of pandemic relief – which fueled consumer spending.

According to a report by the Commerce Department, gross domestic product rebounded at a 33.1 percent annualised rate last quarter -that was the fastest pace since the government started keeping records in 1947 and followed a historic shrinkage rate of 31.4 percent in the second quarter.

Trump will likely seize on the stunning rebound in GDP as a sign of recovery, but output remains below its level in the fourth quarter of 2019, a fact  Biden is almost certain to highlight along with signs that the growth spurt is fast petering out.

In the final leg of campaign, Biden, will head to three states Trump won in 2016: Iowa, Wisconsin and then Michigan, where he will hold a joint Saturday rally with former President Barack Obama.

Trump meanwhile plans to return to the Midwest on Friday, campaigning in Michigan, Wisconsin and Minnesota. In all, he plans to visit 10 states in the last week of the campaign and will host 11 rallies in the final 48 hours, according to his campaign.

In a significant setback for Republicans in two battleground states, the US Supreme Court allowed absentee ballots in North Carolina and Pennsylvania to be received and counted up to nine days after Election Day.

Trump has made unfounded claims that voting by mail, a common practice in US elections, leads to widespread fraud.

But Trump and his allies have also notched important wins, including a ruling that the Republican governor of Texas may limit drop-off sites for election ballots.

Democratic US presidential nominee Joe Biden walking beside his granddaughter Natalie as he prepares to board a plane at the airport, in New Castle, Delaware, US [Brian Snyder/Reuters]

Opinion polls suggest Biden has a significant edge nationally, but his lead is tighter in battleground states. With its 29 electoral votes, the state is a major prize in next Tuesday’s election.

Trump will stage an outdoor rally in Tampa while Biden, in contrast, will hold a drive-in rally later in Tampa where attendees will remain in their cars. He will host a similar event earlier in the day in Broward County in South Florida.

Read more about Florida’s role in in the election here.

Three of four voters worry about violence in a divided nation

Three of four voters express concern about the possibility of violence on Election Day, a new USA TODAY/Suffolk University Poll has found.

Only one in four say they are “very confident” the nation will have a peaceful transfer of power if Biden defeats Trump.

Legendary golfer Jack Nicklaus said he has cast his vote for Trump and urged Americans who have not made up their minds to vote for him too.

Nicklaus, an 18-time major winner, said Trump has already delivered on his promises in the past three and a half years while being “more diverse than any other President” before.

“You might not like the way our President says or tweets some things – and trust me, I have told him that! – but I have learned to look past that and focus on what he’s tried to accomplish,” Nicklaus, 80, said in a statement on Twitter.

Nicklaus said Trump’s policies will continue to bring the “American Dream” to many families across the nation.

Soon after Nicklaus’s endorsement, Trump replied on Twitter: “Jack, this is a Great Honor. Thank you!”

Yard signs supporting US President Donald Trump and Democratic US presidential nominee and former Vice President Joe Biden are seen outside of an early voting site at the Fairfax County Government Center in Fairfax, Virginia, US [File: Al Drago/Reuters]

Catch up on yesterday’s updates here.